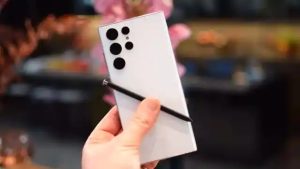 New Delhi. Samsung is currently preparing to launch the Galaxy S23 Series. According to the reports, this phone can enter the market early next year. It is expected that the company will launch this series at the Galaxy Unpacked event to be held in January or February. Samsung has not given any information about the launch date of this series yet, but in the meantime, the Galaxy S23 Ultra smartphone of this series has been listed on the benchmarking platform Geekbench. According to the Geekbench listing, the model number of the phone is SM-S918U.

The phone will work on Android 13
If Geekbench is to be believed, then the company is going to provide a processor codenamed Kalama in the phone. From this it is being speculated that the processor found in the phone could be Snapdragon 8 Gen 2. This phone has got a score of 1521 in Geekbench’s single-core test and 4689 in multi-core test. The listing also states that the phone will come with at least 8GB of RAM. However, it is almost certain that the phone will also come in 12 GB RAM and 512 GB internal storage option. This upcoming Samsung phone will work on One UI 5.0 based on Android 13 out of the box.

Display with 120Hz refresh rate will be available
A few days ago this phone has also been seen on the certification website 3C. According to this listing, the phone will come with 25W fast charging and 5000mAh battery. According to leaked reports, the company is going to offer a 6.8-inch Dynamic AMOLED QHD+ display in this phone, which will support a refresh rate of 120Hz.

Shimla. Union Minister Anurag Thakur became very emotional during an election meeting in Himachal on Friday. Not only did his throat get full, but he was also seen wiping tears many times. Somehow he fulfilled his word. Anurag Thakur was addressing the workers in his Lok Sabha constituency Sujanpur. During this […]