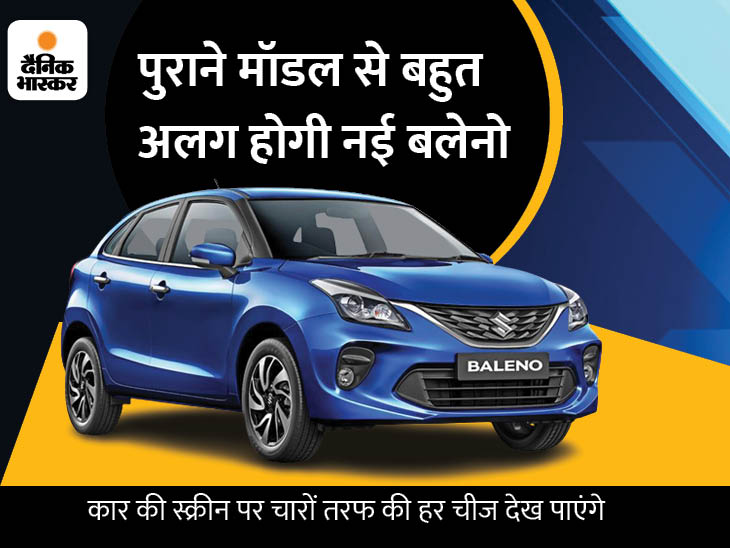 Photos and features of the new model of Maruti Baleno have been leaked before the launch. With updated features, Baleno will be the most featured car in its segment. A lot of changes have been made to the exterior and interior of the car. It will be launched on 23 February. The company has already started its booking.

New Baleno Exterior
It is clear from the leaked photos that Baleno 2022 has been designed with a new stitch. It will get a new front face, a wider grille and a new set of headlights with three-element DRLs. The foglamp casing will also be bigger in size than the previous model.

New Baleno Interior
360 degree camera will be available in this premium hatchback. It will be the first car in its segment to have this feature. It will get a 9-inch SmartPlay Pro Plus touchscreen infotainment system. It has been made jointly by Suzuki and Toyota. This infotainment system wireless supports Android Auto and Apple Car Play. The HUD feature in the car will also be seen for the first time in this segment.

Features will be controlled by steering
Along with connected car technology, the new Baleno will see many more segment first features including wireless phone charging, Alexa voice commands, headsup display, new flat bottom steering wheel, cruise control. Most of the features can be controlled from the steering. The digital meter will be found on the front glass of the car itself. ARKAMYS’s surround senses have been installed for the best music.

360 view camera will also be available

360 view camera will be available in this facelift premium hatchback. This will help the driver more in driving the car. This feature is going to be available for the first time in any car of Maruti. The feature will offer a surround view of the Baleno, which will not only help the drivers park the car in tight spaces but also help in avoiding difficulties on blind roads. It will also get features like electronic stability program with 6 airbags.