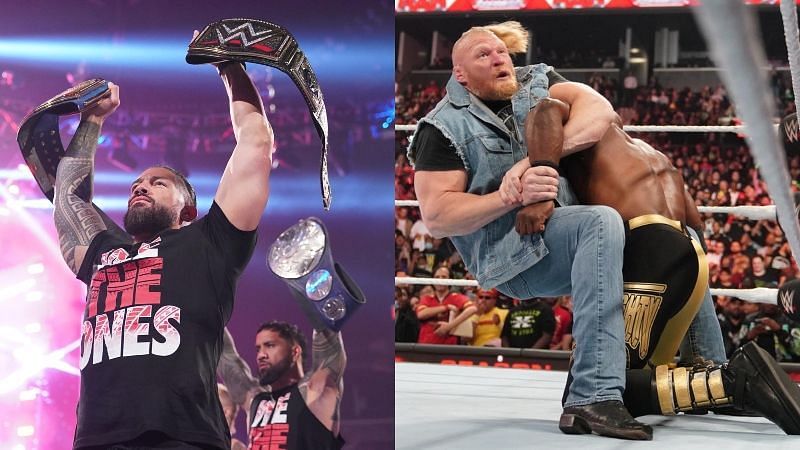 5 big things that were told in gestures through RAW

RawThe next Raw from WWE Extreme Rules 2022 was expecting a lot of exciting things to happen and as expected the episode of Red Brand has proved to be memorable. It saw big wins for Johnny Gargano, Rey Mysterio, Candice LeRae, Omos, Seth Rollins and Matt Riddle.

Apart from these, DX celebrated the moment of completion of 25 years, the return of 2 other former champions apart from The Bloodline, The Miz and Brock Lesnar also made the event memorable. In this article, let’s know about the 5 big things that WWE has told in gestures through Raw this week.

Bobby Lashley was supposed to defend his WWE US Title against Seth Rollins on a recent episode of Raw, but Brock Lesnar returned and attacked him before the match. Lesnar has appeared on TV for the first time since his loss against Roman Reigns at SummerSlam 2022.

Let us tell you that according to some reports, there may be a Lashley vs Lesnar match in Crown Jewel 2022. Now the attack on The Almighty by The Beast on Raw is giving strong indications that this match is about to happen. Let us tell you that Roman Reigns had interfered in his match of Royal Rumble 2022, but now a clean match between them can create panic in the pro wrestling world.

#) Next week will be the big superstar’s comeback

A few months ago, the Ezekiel and his family angle was a big fan favorite in WWE, but the Ezekiel gimmick was dropped as soon as the creative control came into the hands of Triple H. He was given time to grow his beard, so that he could return to the character of Elias.

The return of Elias was hyped through a clip on a recent episode of Raw, and it has now been officially confirmed that Elias will be returning for next week’s episode of the Red Brand. Now it will be interesting to see how Triple H carries forward the character of Elias.

#) The Judgment Day vs The OC Storyline

The Judgment Day was originally formed by Edge, but Finn Balor, Rhea Ripley, Damien Priest, and Dominic Mysterio have been causing trouble for their enemies since their ouster from the group. Over the past few weeks, he has tried to rope in AJ Styles, but to no avail.

Now The Phenomenal has got 2 new companions to tackle The Judgment Day. On The Judgment Day segment on Raw, Luke Gallows and Karl Anderson returned and teamed up with Styles to thrash the Heel Superstars. Now in the coming weeks it will be interesting to see how much the feud between these two teams can create.

#) Seth Rollins won a championship after a long time

The Visionary took advantage of an attack by Lesnar to register the win. Let us tell you that Rollins has won a championship in WWE after almost two and a half years and he has defeated Lashley to become the US Champion for the second time in his career.

#) Will Je Uso become the reason for the breakup of The Bloodline?

The Bloodline has been dominating the WWE roster for the past two years, but over the past few weeks, the group has seen growing differences. Last week on Raw, Logan Paul tried to get the members of Bloodline to fight among themselves. And this week, Jay Uso was seen enjoying beating Zayn in a match between Sami Zayn and Matt Riddle.

While Roman Reigns continues to lean toward Zen, Je Uso’s actions regularly anger the Tribal Chief. This situation shows that the reason for the breakup of The Bloodline will not be Zen but Je Uso.