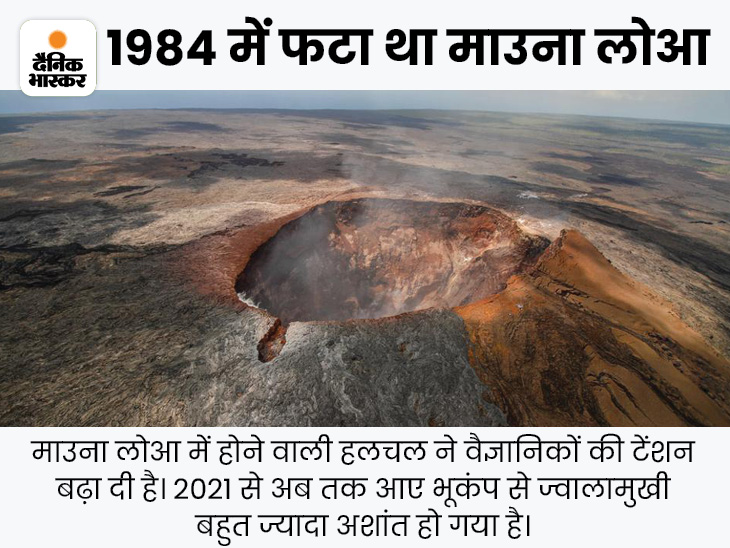 The tremors of 5.0 magnitude earthquake were felt in the world’s largest and active volcano Mauna Loa in Hawaii, USA on Friday, ie on October 14. Scientists say that now this volcano has become very disturbed.

According to the US Geological Survey, one after another earthquake tremors were felt in the volcano. First there was an earthquake of 4.6 magnitude. After 24 seconds there was a tremendous 5.1 magnitude earthquake. The quake’s epicenter was south of the city of Pahala, according to a statement from Hawaii’s Volcano Observatory.

There are a total of 5 volcanoes active in Hawaii. Of these, Mauna Loa is the most dangerous.

No tsunami threat at present
Hawaii County Mayor Mitch Roth said there were no reports of any major damage or injuries. However, some buildings in Pahala have suffered minor damage. The Pacific Tsunami Warning Center said there was no tsunami threat in Hawaii.

Appeal to people to go to safe places
The volcano on Mauna Loa has not erupted yet, but scientists are keeping a close eye on the volcano. Keeping in view the safety of the people, the officials have appealed them to go to safer places. Some people settled there have also made preparations to run away. If Mauna Loa is to explode completely, its lava can reach local settlements in just a few hours.

The active volcano Mauna Loa is about 13,000 feet above sea level.

Mauna Loa started blazing last year
According to Hawaii’s Volcano Observatory, 200 earthquakes were recorded in Mauna Loa in March 2021. The magnitude of these earthquakes was recorded less than 2.5 on the Richter scale. Most of the earthquakes occurred about 6 km below the summit.