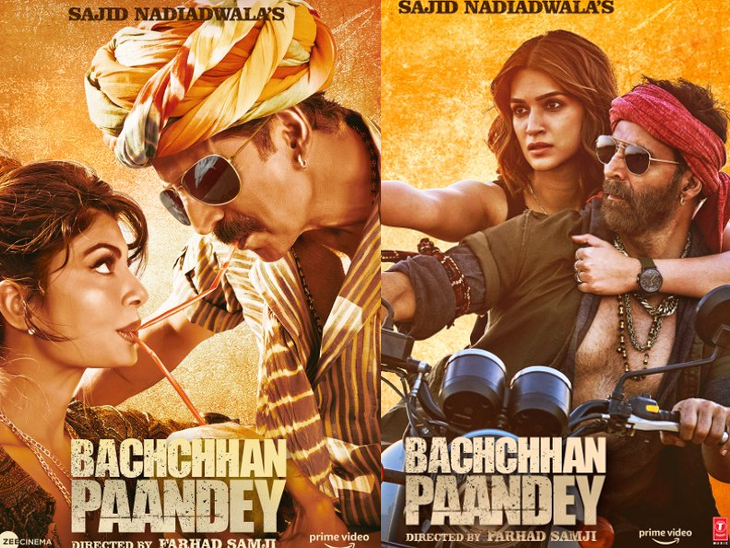 The trailer of actor Akshay Kumar’s upcoming film ‘Bachchan Pandey’ has been released. Akshay Kumar himself has also shared the trailer of this action-comedy film with fans on social media. Apart from Akshay, Jacqueline Fernandez and Kriti Sanon are also in lead roles in this film, directed by Farhad Samji.

Kriti Sanon can be seen in the role of a director in the trailer. Arshad Warsi is with him in the role of his friend. Kriti wants to make her new film on dreaded gangster Bachchan Pandey. But, it also carries a lot of danger. Stars like Prateik Babbar, Sanjay Mishra, Pankaj Tripathi can also be seen doing comedy in the trailer. On the other hand, Jacqueline Fernandez is playing the character of Bachchan Pandey’s girlfriend ‘Sophie’ in this film.

‘Bachchan Pandey’ to release on March 18
This film is produced by Sajid Nadiadwala. Apart from Akshay, Jacqueline, Kriti, the film also stars Arshad Warsi, Pankaj Tripathi, Prateik Babbar, Sanjay Mishra, Abhimanyu Singh in lead roles. ‘Bachchan Pandey’ will be released in theaters on March 18 on the occasion of Holi. It is being told that ‘Bachchan Pandey’ is a remake of Tamil film ‘Jigarthanda’. Apart from this film, Akshay has also appeared in many big films like ‘Raksha Bandhan’, ‘Prithviraj’, ‘Gorkha’, ‘Bade Miyan Chote Miyan’, ‘Ram Setu’, ‘Oh My God 2’, ‘Mission Cinderella’, ‘Selfie’. are going to be seen. Akshay was last seen in ‘Atrangi Re’ alongside Sara Ali Khan and Dhanush.