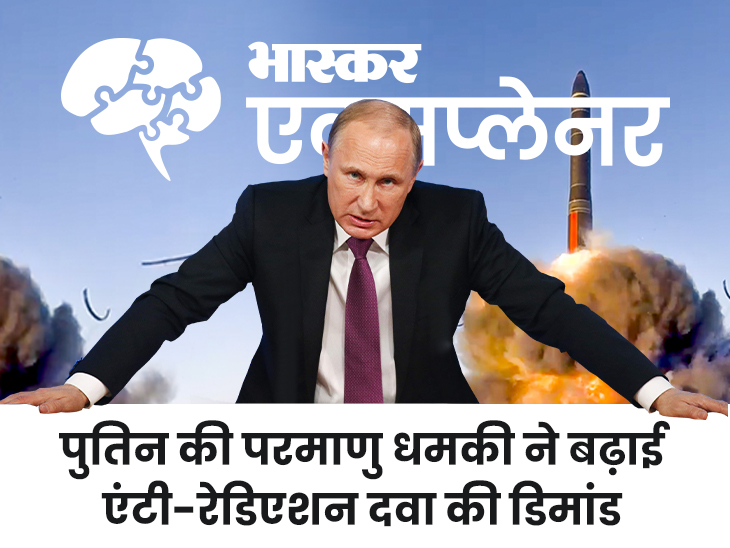 On October 2, 2022, the US government announced the purchase of iodine medicine worth Rs 2,389 crore. For the first time in the history of America, so many iodine tablets have been purchased at the same time.

The Biden government has said in the clarification of the purchase of the pill that these medicines have been purchased to avoid chemical, biological, radiological and nuclear attacks.

Why did America and Europe suddenly need such a large number of anti-radiation drugs?

To understand this, one has to know 4 things of the statement of Russian President Vladimir Putin on 24 September 2022…

1. Putin said, ‘We will certainly use all our dangerous weapons to protect Russia and our people.’

2. He said that we have the most dangerous weapons to wreak havoc in the world.

3. The Russian President has described it as Russia’s biggest military mobilization since the Second World War. Purpose – to win the war with Ukraine at any cost and answer the western countries.

4. Putin said that Western countries have not been in any bluff, it is not a jackass.

Just 5 days before Joe Biden’s statement, the US government has announced the purchase of iodine tablets. The US government is purchasing this drug under the BioShield Act. Actually, in 2004, the US Parliament made this law. Under this, a plan was prepared to spend 41 thousand crores on medicines in the next 10 years to avoid chemical and nuclear attacks.

Now the most important question is how will a small iodine bullet save it from a nuclear attack…..

In this case, radioactive iodine enters the body through the breath or through the skin. Because of this, 5 types of effects are seen in people’s body.

2. Tumors in the throat and other parts of the body

Not only this, people who come in contact with this chemical after a nuclear blast can die within a few hours. At this time the drug of iodine comes in handy.

Anti-radiation drug saves life by stopping I-131 from entering the body
Iodine medicine works to save lives from I-131. This medicine is made by mixing 2 chemicals potassium and iodine. It is also called potassium iodide. This medicine saves lives in case of attack in 3 ways.

firstThe US Centers for Disease Control and Prevention (CDC) says that the potassium iodide drug contains a very high amount of non-radioactive iodine. In such a situation, after taking this medicine, it prevents more iodine from entering the body.

another: I-131 floating in the air after a nuclear explosion, if it goes inside the body, it becomes tissue in the thyroid gland. This medicine works to eliminate it.

thirdTumors start forming in many organs as soon as iodine-131 enters the body. This drug works to eliminate this tumor.
Is potassium iodide drug 100% safe in protecting against nuclear attack?
The anti-radiation drug i.e. potassium iodide is also not 100% safe in the event of a nuclear attack. According to the CDC, ‘the effect of the drug depends on how much radioactive iodine enters the body after the explosion.’

This medicine is prescribed to people below 40 years of age. Pregnant and lactating women can also take this medicine.

Potassium iodide saves people’s lives from the danger of radioactive iodine entering the body, but it does not protect against other types of radiation released after a nuclear explosion.

firstIn 1986, there was an explosion at the Chernobyl Nuclear Plant in Pripyat, northern Ukraine. Then there was 400 times more radiation in Chernobyl than the radiation emitted by the nuclear attack in Hiroshima. Then potassium iodide tablets were distributed to save lives.

anotherThe Fukushima Nuclear Power Plant was damaged by the 2011 Japan earthquake and tsunami. At this time the people of Japan had bought this medicine to save their lives. Not only in Japan but also in America, the sale of iodine drug had increased.

1. Supreme debate on EWS reservation: Lawyer said – reservation to upper castes is like stabbing the chest of the constitution; SC said – will check whether it is right or wrong

Whether or not the economically weaker sections should get 10% EWS reservation in education and government jobs, is a hot topic of debate in the country these days. On September 13, September 14 and September 15, the matter was heatedly debated in the Supreme Court. During this, words like constitution, caste, social justice were also mentioned. Bhaskar is presenting the interesting arguments of the debate in the Supreme Court on this subject in the Explainer and the strict comments of the judges. (read full story)

2. Is Russia fleeing Ukraine: Ukraine snatched 6,000 sq km area by laying a trap, 8 soldiers against one

Both these news are from this month. This is the biggest blow to the Russian army since the war against Ukraine began on 24 February.