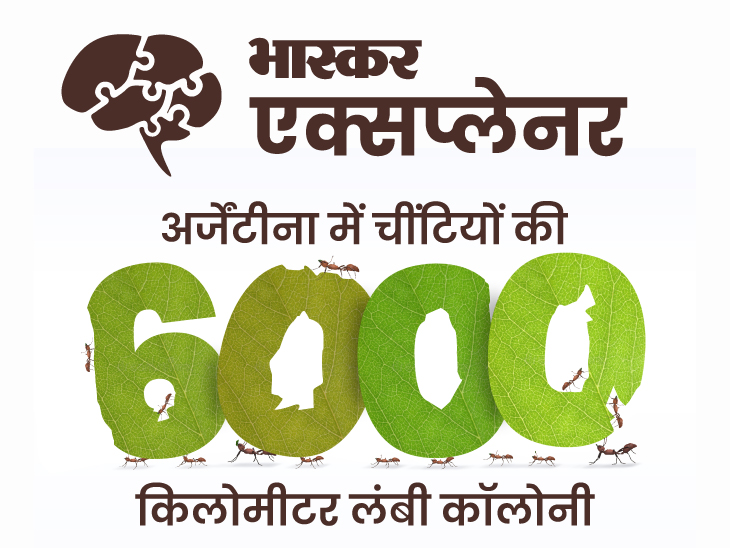 This dizzying number is the number of ants on earth.

In the language of mathematics, then this number is 20 quadrillion or 200 million conch shell or 20 lakh crore billion. That is, 15 zeros in front of 20.

In this Bhaskar Explainer, we know how the number of ants was detected for the first time, the purpose of this study and its benefits.

A team of researchers from Australia, Germany and Hong Kong has found the population of ants based on 489 studies by scientists from around the world. This study is published in the journal Proceedings of the National Academy of Sciences. Along with English, studies done in French, Russian and Chinese language Mandarin were also analyzed.

For this, the researchers tried to collect data on different ants living on land and trees in all the continents of the world. Even after this, they could not collect the data of every place. Researchers say that Africa is an example of this, where many ants are found, but they have been studied very little.

The researchers involved in the study have called them ecological engineers because of the contribution of ants to our ecosystem.

Ants weigh 12 million tons, more than all mammals and birds

Biomass means the total weight or total volume of an organism in a particular area. Biomass is usually measured in terms of dry weight, as the weight is replaced by water in the body when measured as weight mass. The unit of measurement of dry weight is the ton carbon.

Sabine Nuten, a researcher involved in the study, said, ‘I was surprised that the ants weighed more than wild mammals and birds combined.’

Biomass is the total weight or total volume of an organism in a given area. It is usually measured in dry weight. Its unit ton is carbon.

Ants are found all over the world except the polar region

According to this study, ants are found almost all over the world except polar regions. Polar regions are covered with snow throughout the year and the human population is negligible. These include areas such as the North and South Pole and Antarctica.

According to the study, most ants live in the hottest and wettest parts of the world. More ants live in forests and dry areas than in cities. At the same time, the population of ants was most dense in the tropical zone of the earth. The areas found in the middle of the earth are called tropical zones. The average temperature here remains 20-30 degree centigrade.

Mark Wong, Forest Fellow at the University of Western Australia’s School of Biological Sciences, who was involved in this study, said, ‘Our results show that tropical areas have the highest number of ants, including those areas that are most vulnerable to human disturbance and environmental changes.’

Why are ants very important for the world?

According to the study, ants are an important part of nature. They aerate the soil, disperse soil and seeds, break down organic material, provide habitat for other animals, and form an important part of the food chain. Ants are closely related to many organisms and some organisms would not survive without ants.

Some birds rely on ants to take out their prey. Many ants are predators, helping to keep populations of other insects under control. There is a mutual relationship between thousands of plant species and ants, in which trees provide food or homes for the ants in exchange for protection or dispersing their seeds.

According to this study, ants can be more effective than insecticides in killing insects for grain production. This picture is of an ant of the species Actatoma, which kills insects. (Source: The Guardian)

Insects expert Patrick Schultheis from the University of Würzburg in Germany and the University of Hong Kong, co-authors of this study, said that ants play an important role in almost every ecosystem on Earth. Schulthis said, Ants move about 13000 kg of soil per hectare every year. They have a great influence in maintaining the nutrient cycle and also play a crucial role in the distribution of plant seeds.’

According to the report of Harvard Forest, ants are important to us because they are a means of airing the soil, from which water and oxygen reach the roots of plants. They feed on the nutritious lysosomes of the seeds under the soil and carry the seeds from one place to another. That is, ants are helpful in the process of exit of plants from seeds.

To maintain ecological balance, ants eat many types of organic materials, which provide food to many organisms.

Scientists in Fiji have discovered a species of ant that plants, fertilizes and protects the coffee crop. (Source: The Guardian)

Study will reveal effect of climate change on ants

Ants come under the category of insects. Some worrying things were revealed in the last few studies on the population of insects. Several studies published in 2021 found that climate change, diseases, pollution, changes in agriculture and the use of pesticides and herbicides kill about 1% to 2% of Earth’s pests each year.

In another study in April 2020, it was found that in the last 30 years, a quarter of the insects living on the earth have been eliminated.

Patrick Schultheis, who was involved in the study, said that humans are often annoyed by ants, but there are many reasons for which they should be thankful to ants. They said, ‘Think of the amount of organic material that 200 million shell ants carry, remove, recycle and eat each year. Ants are so important to biological processes that they are called ecosystem engineers.

Eo Wilson, an ant scientist, once said about insects like ants, ‘These little things run the world.’

After reading the news you can take part in a poll:

1. NASA’s spacecraft collided with asteroid for the first time: Great test to save Earth successful, trying to change the path of 5 billion kg asteroid

3. Ball spider hits the camera or crosses the stadium: 10 interesting but confusing rules of cricket; Dhoni-Kohli also had to pay the price

4. About 1000 crores spent annually on the glare of the British monarchy: 41% of Britain’s youth are against the monarchy, know the reason for the protest in 5 points

Previous Which car to buy this Navratri under ₹ 5 Lakh? Read Price of All 9 Vehicles in 2 Minutes – Cheapest cars for navratri festival under 5 lakh rupees
Next OnePlus 5G phones are getting huge discounts and offers with OnePlus 10R 5G Prime Blue Edition