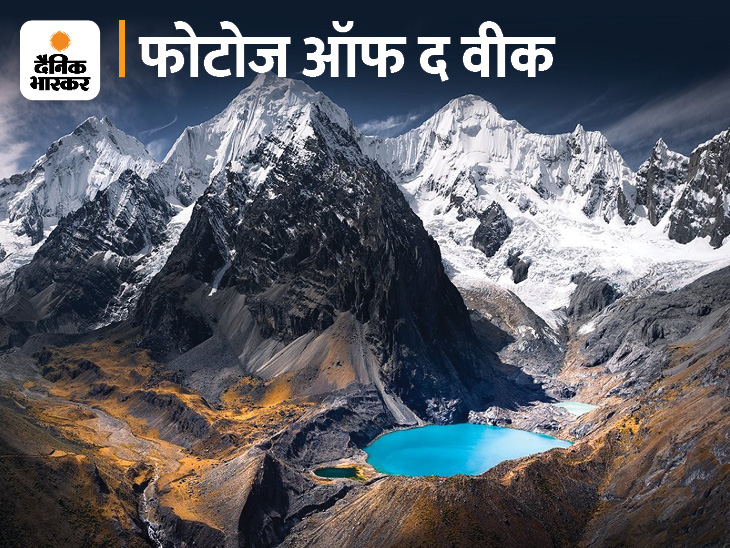 The picture is of Peru, clicked by Karol Nienartoewicz. The world’s longest mountain range is visible in the photo, the Andes. The average elevation of this range is 4,000 meters. The Andes passes through seven countries of South America – Colombia, Argentina, Chile, Bolivia, Peru, Ecuador and Venezuela. This picture has received the award for Best Photo under World Photography Day 2022. Karol has clicked this picture from a height of about five thousand meters above sea level. It took him about 30 days to get the perfect shot.

The picture is of Chandigarh, where the 90th Air Force Day was celebrated on Saturday. The special thing is that for the first time outside an airbase, the sight of the might of the Air Force was seen in the sky of Chandigarh’s famous Sukhna Lake. About 80 military aircraft and helicopters participated in this air show.

The picture is from Tarragona, Spain, where the ‘Human Towers’ competition was organized. It is one of the traditional festivals of the Catalonia region of Spain. First, several teams are assembled, who try to build and destroy the Human Tower in this competition.

The picture is of Qatar’s Katara Towers, which has been specially built for football players. This tower has a total of 40 floors and its length is 692 feet. The FIFA World Cup is to be held in Qatar this year in November 2022. Now less than 50 days are left for FIFA to start in Qatar.

The picture is from Cuba’s Pinar del Río province, where a teacher is seen drying his school books after the devastation of Hurricane Ian. The speed of Hurricane Ian was about 250 km per hour. The life of about 10 million people was affected by this storm.

Bullfighting protests are taking place in Bogota, Colombia. People are resorting to different costumes to show their protest.

7) Germany: After getting the Nobel, a dip in the water is done

The picture is of Swedish genetic scientist Svante Pabo. Svante Pabo was awarded the Nobel in Medicine on Monday for discoveries related to the genome of the extinct hominin and human evolution. After the award was announced, colleagues working with him at the Max-Planck Institute threw him into the water. This is how celebration is done here on getting a big award or on completion of PhD.

This picture is of Xinjiang province of China, clicked by Chinese photographer Jinyi He. The photo is titled ‘THE VEIN’ and shows a bird’s eye view of the Dushanzi Grand Canyon. It has received the Panoramic Photo of the Year award. This competition of Epson is considered to be the largest panoramic photo contest, in which participants from about a hundred countries take part.

9) After the shootout in Thailand, the atmosphere of mourning

The picture is from Thailand, where indiscriminate firing was done on the child care center. 31 people have died in this incident, mostly children were involved. There is an atmosphere of mourning all over Thailand. During this, the accused assailant shot himself too and he too died.

The picture is from China’s Sichuan province, where a sculpture of a panda has been installed while taking a selfie. It was created by Dutch artist Florentijn Hoffmann. This sculpture is 26.5 meters long and 11 meters wide. Made of stainless stein, this sculpture weighs 130 tons.