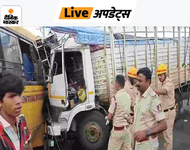 A college bus and a truck collided hard in Athani, Karnataka on Saturday. The drivers of the bus and the truck were killed in the accident, while several students were injured. The incident took place near Athani’s Second Pre-University College, when the bus was entering the college campus. There were 60 students in the bus, out of which 30 students suffered minor injuries.

A female teacher in the bus has suffered serious injuries. He has been taken to the hospital for treatment. The rest of the students have been sent home along with their parents. Police is investigating after registering a case.

Biggest international fake passport/visa racket busted by IGI unit of Delhi Police. The team has arrested 5 people including mastermind Zakir. DCP (IGI Airport) Tanu Sharma said that 325 fake passports, 175 fake visas and other related things have been recovered from them.

Under the guise of Delhi’s new liquor policy, Congress workers demonstrated outside the Aam Aadmi Party (AAP) office over the scam. Congress workers demanded the resignation of Delhi Deputy CM Manish Sisodia. Let us inform that on Friday, in the Excise scam of Delhi, the CBI operating at 21 places in 7 states including the residence of Deputy CM Manish Sisodia had raided.

The Mumbai High Court on Saturday granted bail to Shyamvar Rai, an accused-turned-government witness in the Sheena Bora murder case. Rai was the driver of Indrani Mukerjea, the main accused in the case. He was arrested in another case in 2015, and later in a case related to the murder of Indrani Mukerjea’s daughter Sheena Bora.

Threatening message received by Mumbai Police; Wrote on WhatsApp – If you trace the location, there will be an explosion in India

Mumbai Police Traffic Control has received a threatening message. The message threatens to carry out 26/11-like attacks in Mumbai. According to the information, this message has been given to the Mumbai Police on WhatsApp, in which it has been said that if you trace its location, it will show outside India and the blast will happen in Mumbai. The threat further states that there are 6 people in India, who will carry out this work. The number from which this message has been sent is said to be from Pakistan. Mumbai Police has started investigation.

4 people died in a road accident in Rajasthan’s Pali, more than 20 are said to be injured. The dead included 3 youths and 1 child. According to the information, a tractor-trolley full of devotees going to visit Ramdevra (Jaisalmer) was hit by the trailer. The injured have been admitted to hospital. All the devotees are from Banaskantha district of Gujarat. Most of these are said to be from Kukdi village. Prime Minister Narendra Modi expressed grief over the road accident. He wished the injured a speedy recovery. Read full news here…

The pilgrimage to the holy Vaishno Devi has been resumed in Katra, Jammu and Kashmir. The yatra was temporarily suspended due to heavy rains in Katra on Friday. Anshul Garg, CEO of Mata Vaishno Devi Shrine Board said that now the situation is under control. They are monitoring the situation. According to the information, on Friday, more than 27 thousand devotees had registered for the darshan of Vaishno Devi.

On the occasion of Janmashtami in the Banke Bihari temple of Vrindavan, the crowd became uncontrollable, 2 died in the stampede

The crowd gathered at the Banke Bihari temple in Vrindavan, Uttar Pradesh, on the occasion of Janmashtami, became uncontrollable. Two devotees died and many were injured due to suffocation in the stampede. The deceased have been identified as Nirmala Devi of Noida and Rajkumar of Jabalpur.

SSP Abhishek Yadav said that this accident happened due to the increase in the crowd. Even before the Mangala Aarti started at 2 pm, the pressure of the crowd started increasing and due to suffocation, about 50 people fell unconscious. Read full news…

There has been a terrorist attack in Mogadishu, the capital of Somalia. The terrorists of the terrorist organization Al-Shabaab attacked the Hyatt Hotel. 8 people died in the attack, 9 are said to be injured. According to the official, the number of injured may increase. According to the news agency Reuters, the terrorists of Al-Shabaab forcibly entered the hotel and started firing continuously among the people. The Al-Shabaab group, an affiliate of Al-Qaeda, has claimed responsibility for the attack. Read full news here…

Earthquake tremors in many districts of UP including Lucknow, intensity was measured at 5.2 on Richter scale

Earthquake tremors were felt in many districts of UP including Lucknow on the intervening night of Friday-Saturday. The magnitude of the earthquake was measured at 5.2 on the Richter scale. According to the National Center for Seismology, the epicenter of the earthquake is being told to the northeast, 139 km from the capital. At present there is no report of any damage due to the earthquake.

Corona Updates; In the last 24 hours, about 11 thousand new cases were found in the country, 29 deaths

Previous Oneplus will soon launch Nord wired earphones in India, great features will be available at a low price
Next Free shopping opportunity on Flipkart, do ₹ 100 to ₹ 10000 shopping absolutely free