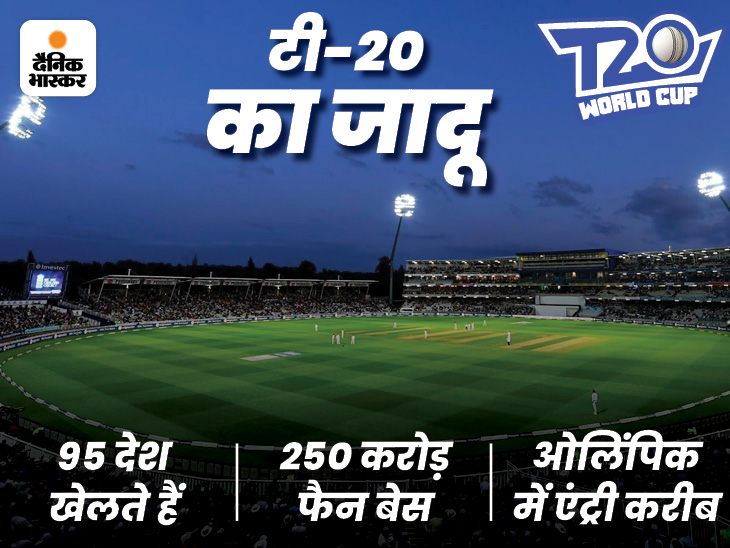 The eighth T20 World Cup is starting in Australia from 16 October. From today we will bring you interesting stories related to T20 cricket and this World Cup every day. In the first story, read how the T20 format made a positive impact on the game of cricket and helped it become a global sport…

In 1975, the Indian Cricket Board used to pay a fee of 2500 rupees to the players of Team India to play a Test match. Then came ODI cricket and in 1983 we became champions in the third World Cup. You will be surprised to know that when our players came back to India after becoming champions, BCCI did not have money to give to its players. Then Lata Mangeshkar did a show for the team and the money that came was given to the players.

Earnings increased after the 1983 World Cup, but even then the BCCI had to pay a fee of Rs 5 lakh to Doordarshan to show a match of India on TV. Barring Australia and England, almost all the cricket boards around the world had a similar situation.

In 1991, TV rights were sold for the first time and the Indian Board’s net worth increased from a few lakh rupees to a few crores. Done. In the coming decade and a half, the status of the board will be a few hundred crores. Why did it happen?

Then came the T20 format. This not only made India and the Indian Cricket Board rich, but also made the game of cricket the second most popular sport in the world after football. Today, the board gives a contract fee of 7 crores annually to the captain of the team, Rohit Sharma. The IPL contract is up to Rs 20 crore. Other stars associated with the Indian team are also earning big money. As far as broadcast is concerned, now the broadcaster gives Rs 43.20 crore to BCCI for an international match to be held in India.

All these changes came after the T20 format hit. We will know today what this format has given to cricket since the first T20 World Cup in 2007. After reading this article till the end, you will be aware of the power of T20 format and also understand how this quick format is beneficial for Test cricket as well.

Access of cricket to more countries
The popularity of the T20 format has increased the reach of this game. The first test match was played in 1877. Even after 145 years of its inception, so far only 12 countries have been able to play in this format. The scope expanded a bit from ODIs, but T20 revolutionized itself. You can see in the next picture how many countries have played international matches in which format so far. The shorter the format in cricket, the greater the chances of a turnaround. In the game of 20-20 overs, even the weaker teams are expected to win. Therefore, this format was adopted by many countries in a very short time.

Cricket is now the second most popular sport thanks to T20
The global fan base of cricket has also almost doubled in 15 years due to the spread of T20 format across the world. Now it is the most followed sport after football. Earlier this status was enjoyed by field hockey. Cricket fans were already present in the largest number in India, but with the advent of the T20 format, it also created a new fan base in the country. Sanjay Jagdale, former secretary of BCCI and former selector of Team India also agrees to this.

He told Bhaskar that T20 created new fans in the country. These are the fans who did not watch cricket before, but T20 attracted them towards them. Women are also there in large numbers in this. You can listen to Sanjay Jagdale by clicking on the first picture attached to this news.

Cricket became a professional sport, IPL is the biggest league of this game
Successful sports in the Modern Era are those who have made their mark at the professional level. The biggest condition for success at the professional level is the existence of a franchise league. Sports like football, basketball, ice hockey, baseball fulfill this condition. With the advent of T20, this became possible in cricket as well. A T20 match is completed within 3 to 4 hours and the intensity remains constant. There is no moment of boredom.

IPL started in India and cricket became a fully professional sport from a semi-professional. You can see the success of IPL in the next two graphics. Since the start of the first T20 World Cup, the earnings of BCCI and ICC have increased almost 10 times.

Re-entry in Olympics will be possible
The biggest sporting event in the world is the Olympics. It also includes sports like football, basketball, but cricket is not getting a place. Cricket was included for the first and last time in the Summer Olympics in Paris in 1900. Then cricket was not included because it required a lot of time to complete its matches. Also a few countries used to play cricket.

The picture changed with the advent of T20. With the passage of time, it reached about 100 countries. The ICC is trying its best to get cricket back in the 2028 Olympic Games to be held in Los Angeles, USA. West Indies and America are hosting the T20 World Cup together in 2024. Matches will also be played in Los Angeles. That is, before the 2028 Olympics, the necessary infrastructure for cricket will be ready there. The International Olympic Committee has also shown a positive attitude towards the re-entry of cricket so far.

Now let’s know what benefit Test cricket got from T20
Sanjay Jagdale told Bhaskar that Test cricket has also become interesting with the advent of T20 cricket. Now batsmen take more risk than before and this has had an impact on Test cricket as well. This has greatly reduced the number of draws in Tests and results in most matches. In the next picture you can see how many Test draws were held before the first World Cup held in 2007 and how many Test draws are taking place since then.

Previous tecno spark smartphone, Great Indian Festival Sale: Buy this Tecno Spark Smartphone at huge discount up to 47%, get up to 11GB RAM support – get discount up to 47 percent on best tecno smartphone with ram support up to 11 gb
Next Oppo Reno 9’s specification leaked before launch, from display to processor is tremendous