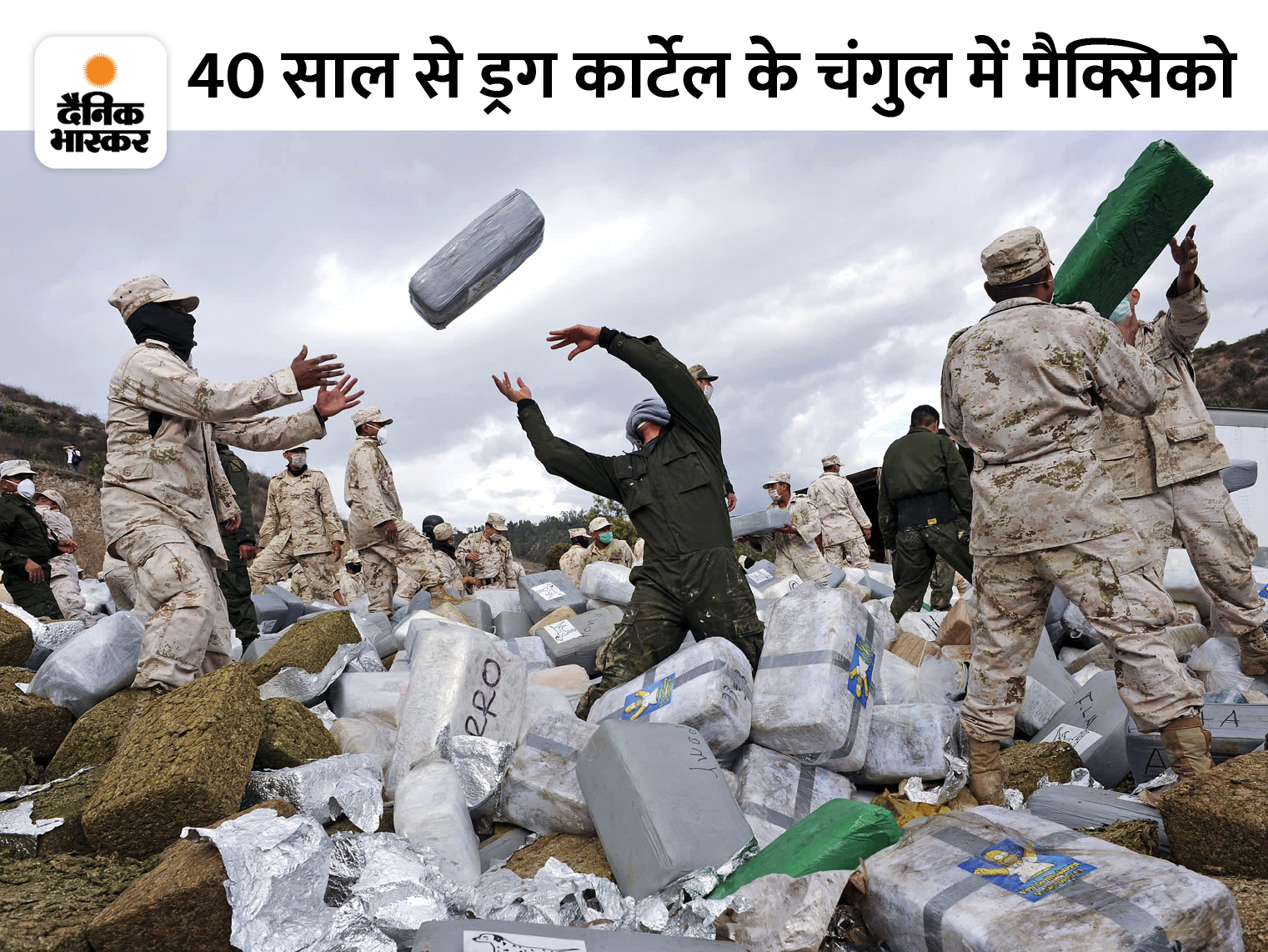 The gang war took place on 6 October in Mexico City, the capital of Mexico. The bloody face of the drug cartel has again come to the fore with the death of 18 people, including Mayor Mendoza, in the firing. Mexico, with a population of about 130 million, has been in the clutches of drug cartels for 40 years. Cartels involved in the smuggling of opium, heroin and marijuana operate as parallel governments.

More than 150 cartels of Mexico smuggle drugs worth about 2.5 lakh crores to America annually. Cartels i.e. these organized gangs have a private army of about 75 thousand operatives. There is a bloody conflict between these cartels.

Gunmen shot and killed 18 people, including Mayor Conardo Mendoza, in the southern Mexican city of Totolepan.

Youth joining the cartel
The largest Sinaloa cartel has over 600 aircraft and helicopters. This number is more than five times that of Mexico’s largest airline Aeromexico. All these planes have been bought by the cartel from America. In Mexico, a large number of youths join these cartels for easy money.

A stock of rifles like AK-47, M-80, also rocket launchers
The cartel has a stockpile of assault rifles such as the AK-47 and M-80, according to a 2022 report by the Mexican Interior Ministry. Every year more than 20 thousand assault rifles are recovered from the possession of drug cartels by the security agencies. The Mexican government destroys the weapons that are recovered from the cartel. They are not used again. Cartels use these weapons in exchange for the supply of drugs from the American mafia. Over the course of 5 years, the cartel has also acquired rocket launchers. They are used to attack government reconnaissance aircraft.

Vandalism: Make video of murder, hang dead bodies at intersections
Cartel gimmicks are terrifying. Along with smuggling, the game of kidnapping tax collection also goes on. They fry those who do not pay the ransom with bullets. Make a video of murder viral. Due to which there was an atmosphere of panic among the people. Cartels hang the bodies of opponents at intersections. Recently, 11 bodies were found hanging after a gang war in the main square of the capital Mexico City.

Bullet Proof Torture Room: Cartels keep kidnapped people and rival cartel operatives in torture rooms, ie Ghetto. Bullet proof layering is done to the windows and doors of these gates. There are always 20 to 25 armed henchmen stationed outside each gate.

Cartel empire in 29 of Mexico’s 32 provinces

Sinaloa : The leader of the biggest cartel, El Chapo now in prison, has escaped twice. 50% is occupied by the drugs business.
Gulf Cartel: Sinaloa’s formidable rival is the cartel. Occupied areas in the Gulf of Mexico. 50 ships in the water fleet.
Los Zetas: Built by police and army fugitives. After killing, he makes a mark of Z-40 on the dead bodies.
Juarez Cartel: It occupies the border with America. It has a private army of sharpest shooter spinners.
Jellisco Cartel: Made in 2010. The Las Zetas came into the limelight after killing 35 people of the cartel and dumping the bodies in the capital.
utensil-levlaya : Made by four brothers. Two brothers were killed due to the gang war with Chapo. The engineer is its kingpin.

Synthetic chemicals from China are hidden in electronic goods and reach various ports in Mexico. From here the chemical goes to the factories.

A Mexican drug cartel is making the synthetic drug fentanyl. The cost of making this drug is much less than heroin, marijuana or opium. Synthetic chemicals are imported from China to make it. The drug cartels have indigenous factories to manufacture fentanyl in the jungles of Mexico. The chemicals are mixed in the powder and converted into fentanyl tablets. Fentanyl overdose killed two lakh people in the US in 2021. Fentanyl is sold in medical stores as a pain reliever.

Previous Dhoni’s jaw was going to become a fan, the junk was thrown, in the process of showing the workmanship, the fleet was buried.
Next Mohammad Shami ready to replace Jasprit Bumrah in team india for t20 world cup 2022 | T20 World Cup: This deadly bowler joined Team India in place of Jasprit Bumrah! will soon fly to australia