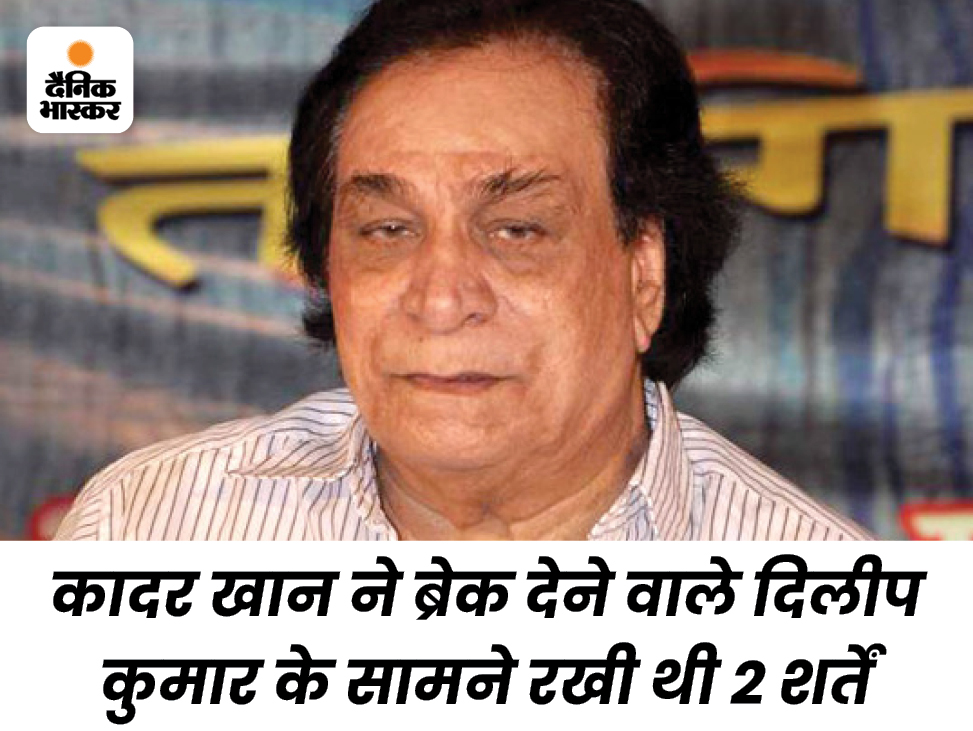 Kader Khan… a master of acting, an expert in comedy and equally strong with pen. Wrote excellent dialogues in many films. Acting in more than 300 films made a mark and dominated Bollywood, but this journey was not so easy. Childhood was spent in so much poverty that three days a week he had to survive by starvation, but his mother did not let Kader Khan leave his studies. Along with studies, Kader Khan used to do mimicry a lot in childhood and this talent brought him to life, but surprisingly, Kader Khan, who gave 5 decades of cinema, did not get many awards, although a year after his death. In 2019, he was awarded the Padma Shri.

Read the full story of Kader Khan’s ups and downs…

The whole family came to India so that Kader did not die.

Kader Khan was born in Kabul, Afghanistan. His father, Abdul Rehman, was from Afghanistan and his mother, Iqbal Begum, was from British India. Before the birth of Kader Khan, he also had 3 elder brothers but all of them died for 8 years. After the birth of Kader, his mother was afraid that if Kader should not die, then his entire family came to India from Afghanistan. After coming to India, the entire family of Kader Khan settled in a settlement in Mumbai.

There used to be blood and beatings in the settlement every day. Kader Khan’s father did not like all this, due to which Kader’s childhood was spent watching the fights and divorce of his parents. After the divorce, Kader’s maternal grandparents forced his mother to marry him again. The family members believed that after getting divorced at a young age, who would take care of Kader and his mother. At the same time, it was also considered wrong for a woman to remain alone in the society. Even after the second marriage, the situation in Kader’s house did not improve and poverty did not decrease either.

Made a living by getting wet, eating 3 days a week and living without eating for 3 days

His stepfather’s behavior towards Kader was not good. The conditions of the house were also from bad to worse. There was neither ration for food nor any means of earning. For this reason, Kader’s stepfather used to send him 10 kilometers to his first father asking for 2 rupees. Along with this, he used to go to the mosque and beg for alms, but even from all this, the family could not survive properly. Alam was that Kadar’s entire family ate 3 days a week and lived without food for 3 days. All these things bothered Kader a lot.

Kader’s childhood was cherished by his mother.

Since childhood, Kader’s mother had a dream that he should become a big man after studying well. But the poverty of the house bothered him a lot. His friends also used to tell him that what is there in this education. Come and work with us. Tired of poverty, Kadar also got involved in the talk of friends and threw all his books. When his mother came to know about this, she was very angry with Kadar and said that the poverty of the house will not be less than your earnings. You just focus on your studies and when you become a big man by this study, then poverty itself will end.

Kader felt his mother’s words till his heart and he brought back his thrown books. He also promised his mother that he would complete his studies. His mother had the biggest hand in shaping Kader’s life. It was his mother who used to give right advice in his every step. But mother’s support was not with Kader for long. His mother had a serious illness, but she never let Kader know about it. One day as soon as Kader came home, he saw his mother vomiting blood. Seeing this, Kadar’s senses were blown away. He asked mother what is this and why didn’t you tell me anything about it. Mother replied that it was nothing but her vomiting was not stopping. Seeing this, Kader hurriedly went to take the doctor. Going to the hospital, he told the doctor about his mother’s condition and asked him to accompany her. The doctor refused to accompany him. Even after much persuasion, when the doctor did not agree, then Kader picked him up in a film style and brought him home. As soon as Kader reached home, he saw that his mother had stopped breathing. Panicked, he asked the doctor to check up on the mother.

The doctor checked up the mother and said that she is no longer in this world. Kader was completely broken by this. It is the result of being away from the mother’s shadow at an early age that the lack of mother is clearly visible in her dialogues written in films.

Kadar used to copy film dialogues by going to the graveyard

Since childhood, Kader Khan had a habit of copying. He used to go to the cemetery and speak film dialogues while talking to himself sitting between two graves. At the same time, a person used to stand under the cover of the wall and watch them. That person was Ashraf Khan. Ashraf was looking for an 8-year-old boy for one of his stage dramas at that time. He gave Kadar work in the play. And from here the fate of Kader Khan changed.

Kader Khan was very smart in studies too

Even after the mother left, Kader continued his studies with fulfilling the promise made to him and doing drama. Kader was very smart in studies. He graduated from Ismail Yusuf College, Mumbai. After this he did his post graduation in civil engineering. Kader was also a lecturer in an engineering college in Mumbai.

Along with teaching, Kader Khan was also associated with theatre. In those days, one of his drama cards became very famous. People from far and wide used to come to see his drama. Meanwhile, one day Kader was teaching in college, when suddenly he got a call from Dilip Kumar. Kader picked up the call and from there a voice came that I am speaking Dilip Kumar and I also want to see your drama Tash Ke Pakta Ke. Here Kadar is quiet. Hearing the name of Dilip Kumar, his hands and feet went cold. After some time Kader replied to Dilip Sahab. He said that of course you can come and give drama, but I have some condition for this. He said that you have to come at the right time to watch the drama because after the gate is closed, it is not opened again and secondly you have to sit and watch the whole drama. Dilip sahib accepted both these conditions of Kader Khan and on the second day he reached half an hour before the time to watch the drama. Also he saw the whole drama.

Dilip sahib had given a film break

Dilip sahib liked this drama of Kader Khan very much and as soon as the show ended, he announced on stage that he would give work to Kader Khan in films. After this Dileep signed Kader in two films.

Kader Khan’s career as a scriptwriter began when Narinder Bedi saw a theater play written by him and asked him to write the script of Jawaani Deewani with Inder Raj Anand, for which Kader Khan received Rs 1500 . In the 1970s and 80s, he wrote stories for several films.

Actually, at that time everyone in the film industry started calling Amitabh Bachchan as Sir ji. But Kader Khan said that how can I call him Sir. He is like a friend and younger brother to me. As a result of this, Kader Khan neither got any film nor got to write the dialogue of any film at the last moment.

Incurable disease became the cause of death

Kader Khan was battling supranuclear palsy in the last days of his life, which is an incurable disease. He was admitted to a Canadian hospital on 28 December 2018 due to breathing problems, where he had come to visit his son and daughter-in-law for treatment. After this, Kader Khan died in Canada on December 31, 2018.