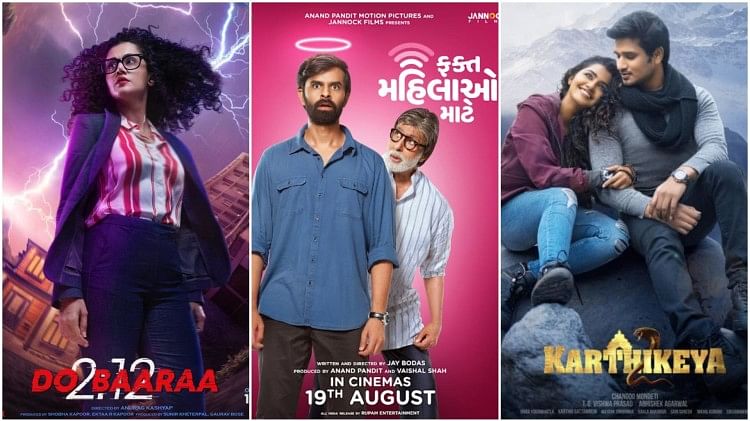 These days, while Bollywood films are falling flat at the box office, regional films are doing wonders. Big budget Bollywood films were being dusted by South films, now Gujarati film ‘Faqat Mahilao Met’ has defeated Taapsee Pannu’s ‘Dobaara’ on its opening day itself. At the same time, ‘Lal Singh Chaddha’ and ‘Raksha Bandhan’ are also doing badly at the box office. Apart from this, the Telugu film ‘Karthikeya 2’ continues to earn a lot. So let us tell which film won the box office on Friday and which got stacked.

Aamir Khan’s ‘Lal Singh Chaddha’ is proving to be a disaster at the box office. The film’s performance at the box office is extremely disappointing. The film had earned Rs 1.95 crore on Thursday, then there has been a decline in its earnings on Friday. According to the initial figures, the film has done a business of 1.60 crores. In this way the total earning of the film has gone up to 53.94.

‘Raksha Bandhan’ was Akshay Kumar’s third film to release this year, which also flopped at the box office. Depicting the brother-sister relationship, the film was directed by Aanand L Rai. According to the initial figures that came on Friday, the film’s earnings are falling day by day. The film has earned Rs 1.20 crore on the ninth day. In such a situation, this film made in a budget of 70 crores has so far earned only Rs 41.30 crore.

Nikhil Siddhartha’s Telugu film ‘Karthikeya 2’ continues to earn a smattering at the box office. On Thursday, where the film collected a collection of 3.84 crores, on Friday there has been a tremendous increase in its earnings. Made in a budget of 30 crores, this film has left behind ‘Lal Singh Chaddha’ and ‘Raksha Bandhan’. The film has earned Rs 6 crore on the seventh day and now its total collection has gone up to Rs 36.20 crore. In such a situation, ‘Karthikeya 2’ has recovered its cost within seven days.

Taapsee Pannu’s film ‘Dobaara’ has had a slow opening at the box office. The film, directed by Anurag Kashyap, is not getting a good response from the audience since day one. Made in the budget of 30 crores, the film collected Rs 60 lakh on the first day, while on the second day it earned only Rs 50 lakh. In such a situation, the film’s earnings have now become Rs 1.10 crore.