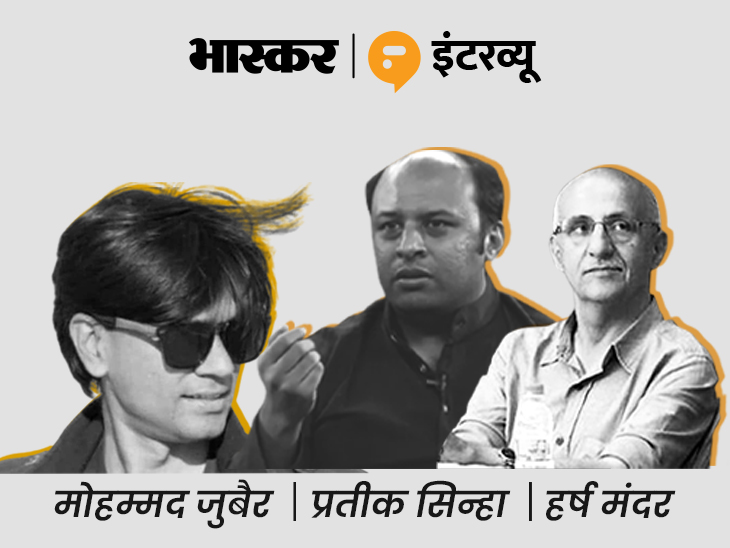 Harsh Mander said – the world understood the importance of the fight of love, Prateek-Zubair said – there is still a lot of work to be done. Nobel Peace Prize 2022; Pratik Sinha Mohammad Zubair Harsh Mander | Altnews Co-Founder

Earlier, Time magazine had informed about the names of three people from India in the race for the Nobel Peace Prize. Among them were the fact-checkers Mohammad Zubair and Prateek Sinha, besides Harsh Mander of Caravan-e Mohabbat Sanstha, who worked against communalism.

All three Indians may not have got the Nobel, but in a conversation with Bhaskar, all three said that they are very happy to be shortlisted for the award, as it has recognized their work internationally.

Firstly Prateek Sinha, who is the co-founder of Alt News…

About career…
In 2017 we started Alt News. I took my engineering degree in 2003. Till 2017 I worked as an engineer only. I became an engineer, but I felt that I could use my skills for the society.

Father Mukul Sinha was a lawyer in the Gujarat High Court. He has fought cases related to Gujarat riots in Ahmedabad. My mother was also an activist, so socio-political issues were discussed in the house. This is where my background was formed.

On meeting Zubair…
I met Zubair in 2014. We became good friends. In 2016, I told Zubair that we both have about 80,000 followers on Facebook and Twitter together. Good audience. Together we can do something in the media space. Especially in the field of misinformation.

On the launch of Alt News…
I left my contract in December 2016. Zubair was working at Nokia at that time. They still work full time because they have to run the family. They can’t leave the job. Initially, I started Alt News and Zubair used to volunteer.

The event that had an effect…
In August 2016, a rally was held in Una, Gujarat. Just now Congress MLA Jignesh Mevani had formed an organization – Una Dalit Adhikar Samiti. 4 Dalit children were killed in Gujarat. In response to this, a rally was held in August 2016. This rally was to go from Ahmedabad to Una. Many members of my parents’ organization Jan Sangharsh Manch were involved in this. Me and my mother were also in the rally. I made videos and documented it on social media.

On July 11, 2016, Dalit youths were brutally thrashed by people who claimed to be members of the Gau Rakshak Samiti in Una, Gujarat. Dalit leader Jignesh Mevani had agitated against this.

The mainstream media did not give it much attention till the last two days of the rally. Only my videos and pictures were being shared on social media. That journey was very important for me. Then I understood that I can also work in the media sector. Then I had decided that now I have to work in media only.

On the nomination for the Nobel…
We don’t know whether we have been nominated or not. Our name was recommended by the Peace Research Institute in February. There was an article in Time magazine that we are one of the favorites for the Nobel Peace Prize. It seals our work. We are working against Fake News and Misinformation. This proves that these are important issues of the country and our work is important.

On planning ahead…
There is a lot of work to be done ahead. We are only 5 years old now. In a way, we haven’t even started yet. Most of the people who win get this award for their work of 30-35 years. I won’t comment on whether we deserve it or not. I must say that we still have a lot of work to do. Apart from education and journalism, we have to work in the technical field as well.

On the need for fact checking…
I have been doing fact checking on social media since 2013-14. Then the misinformation was of a different kind. Then data was expensive and internet speed was low. Most of the photos are shared. I remember sharing a picture of Taiwan claiming that this is the bus stand of Gujarat. I fact-checked and told that it is from Taiwan. I used to spend a lot of time on social media. Used to see fake news or wrong information being shared.

I realized that there is a need to work in this direction going forward. Zubair was also spending a lot of time on social media. We both knew this issue would be big. We knew a lot about fact checking. In 2017 it was also realized that those who were traditional journalists did not have the tools to verify fake pictures or videos. At that time no one was even doing special work in this direction. That’s why we started working to stop fake news.

We didn’t even have the training to do ground reporting. So using the skills we had at that time, we started the work of fact checking.

Regarding the case on Zubair…
We are on target, so many fake cases were filed against Zubair. The person is being sent to jail in 2022 for the 1983 case. That too for the post that was shared in 2018. It was alleged that due to this the social order was deteriorating. What could be a bigger joke than this? We know we will be on target. Our work gets such international recognition, so we feel a little stronger. The government also knows that targeting us can make headlines in the international world.

The Special Cell of Delhi Police had arrested Mohammad Zubair on 28 June. He was accused of hurting religious sentiments.

On the business model…
Our business model runs on donations. I read an article in the Guardian Newspaper of the UK about the model of how it turned from a loss making venture into a profitable venture by taking money from users. The same idea was on our mind. We work on the model of donation from people

Mohammad Zubair said – it is a great feeling to be nominated for the Nobel
There is no official information about our nomination from the Nobel Committee, but knowing that we have been nominated or shortlisted is a great feeling in itself. We feel great to know that Alt News’ work is being recognized and respected by the world.

Even though I have a lot of followers on Twitter, except a few friends in real life no one knew that I am a part of Alt News. Thousands of people supported me after I went to jail. Support the work we are doing for our organization.

It’s a good feeling to see such support for your work. Those who are with us understand that all the cases against us are fake. Their motive was to target us and influence our work. We work without any political pressure.

Harsh Mander said – this nomination is not mine, but of all the comrades who were involved in the fight
Nomination for the award means that it is necessary to face the era of hatred, which is going on in our country. The whole world is understanding the importance of the battle of love. I admit that I am not alone in this fight. Many people are fighting this battle.

They are trying to counter this hatred. Paying the price for it. Many people were sent to jail because they are following the Constitution. When the country became independent, then the Constitution had given the assurance that all people who believe in any religion or God are equal and there will be no difference between them.

This nomination is not only mine, but all those companions who have been involved in this fight. I was in the IAS service for almost two decades. This service has been very close to my heart.

That’s why I got out of the IAS service. I feel now that my decision to come out of government service and fight the battle was right. The slight difference that we have been able to bring has come because of our independent status.

I understand that today’s era we are going through is one fight for equal rights for the people of minority communities, but another fight is to raise voice and register protest against the government and power in a peaceful manner. It has become very difficult now. Now cases are done under UAPA, ED gets raided. Such laws are being used against human rights activists.

The government wants that the opposing voice in the political field, in the media, in the society should be completely eliminated. That’s why we want this fight to continue. There is a price to live life according to our values ​​and it is necessary for us to accept it happily. I don’t have any regrets.

Alice Belyatske, a human rights advocate from Belarus, has been selected for the award. Alis started the Democracy Movement in 1980 against the dictatorship of Belarus. They are fighting the battle to restore true democracy in their country till date. Belarus President Lukashenko stands with Vladimir Putin in the Russia-Ukraine war. Alis’ organization provides legal aid to jailed democracy supporters. Alice herself is still in jail.
Read full news…

Previous Nobel Peace Prize: Who are this year’s three winners and what have they done?
Next After all, how did Australia do the game? Australia India | Commonwealth Games (CWG) 2026 Wrestling Dropout Explained