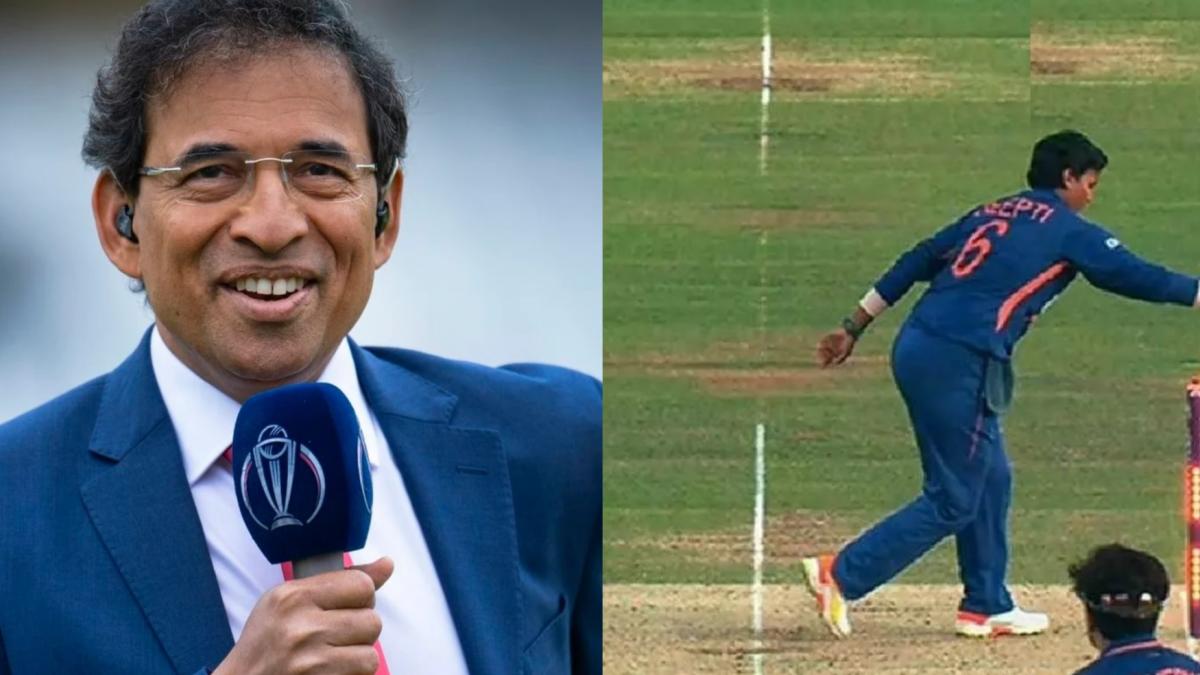 The Indian women’s cricket team recently washed England in their own home after a 3-0 clean sweep in the ODI series. The women’s team, led by captain Harmanpreet Kaur, created history, but the last one-day match played at Lord’s remained in the limelight due to a runout. Team India’s Deepti Sharma had run out ‘Mankad’ to Charlie Dean of England, which caused a ruckus. This runout may have happened under the rules of the ICC, but the current and former England cricketers were furious over it.

CLICK: The British were stunned by Deepti Sharma’s runout, started teaching India a lesson in sportsmanship!

Amidst all the arguments and debate, now veteran commentator Harsha Bhogle has spoken openly on this issue. Harsha Bhogle spoke on this issue through a long thread on Twitter on Friday and told how England, where cricket originated, is trying to impose its thinking on other people, countries.

‘It is very disturbing to me that a large section of the media in England is questioning a girl who played within the rules of the game and no one is questioning the player who is non- Was trying to take advantage of the legal way and she had done so many times. There are also very rational people involved and I think culture has a hand behind it. The British are thinking that what happened was wrong and because they have ruled a huge part of the cricketing world, they told everyone that it was wrong.

it is a cultural thing. The English thought it was wrong to do so & because they ruled over a large part of the cricket world, they told everyone it was wrong. The colonial domination was so powerful that few questioned it. As a result, the mindset still is that what England (2/n)

to think the way England does and so we see what is so plainly wrong. So too the notion that turning tracks are bad but seaming tracks are fine. The reason I say it is cultural is that it is what they are brought up to think. They don’t think it is wrong. The problem arises (4/n)

‘The colonial sovereignty was so strong that very few fingers were pointed at it. The result was that even today it is believed that whatever England misunderstood, the rest of the cricketing world should misunderstand it. Just like the Australians preach not to cross the Lakshman Rekha. That Lakshman Rekha, which he himself has drawn according to his own culture and which cannot be correct according to others. The rest of the world is not committed to following the thinking of England and that is why we see clearly what is wrong. It is also wrong to think that turn taking pitches are bad and seaming pitches are perfect.

asking others to wake up from centuries old colonial slumber. The easiest thing is to play by the laws of the game & stop worrying about subjective interpretation of the spirit of the game,stop forcing opinions on others.The law says the non-striker must be behind the crease(6/n)

‘It is an issue of culture, I am saying this because they grow up with such thinking. They don’t understand that this is wrong. In such a situation, the problem arises and in this we are also found guilty when people judge people because of each other’s point of view. England want the rest of the country not to run out non-striker batsmen and have been extremely critical and bitter towards Deepti and other players who do so. In such a situation, we are also trying hard that the rest of the people also wake up from this deep sleep of centuries old.

‘For this it is easiest to play cricket within the limits of the rules and not fall into subjective interpretations like sportsmanship in cricket and stop imposing your opinion on others.’

stop believing that the world must move at their bidding. As in society, where judges implement the law of the land, so too in cricket. But I remain disturbed by the vitriol directed towards Deepti. She played by the laws of the game and criticism of what she did must stop

The rule states that as long as the bowler’s arm is at its top point, the non-striker must remain behind the crease. If you follow this then the game will proceed smoothly. If you continue to point fingers at others, as many in England have pointed at Brilliance, you will continue to invite questions for yourself. It is important that the people sitting in a position of power, or those who were once powerful, stop thinking that the world will run according to them. As it happens in society, a judge makes sure that the law is followed, the same thing happens in cricket. But the way acrimonious things were said towards Deepti, it bothered me a lot. She was playing by the rules and there should be a complete stop to the criticism of her actions.

What happened in the match?

The last match of the three-match ODI series was played at Lord’s, it was Jhulan Goswami’s last ODI match. Team India made a score of 169 while batting first, in response England’s team could only score 153 runs. When England’s nine wickets had fallen, at that time England needed 17 runs in 39 balls. Deepti Sharma came to bowl and then when Charlie Dean, standing at the non-strike end, came out of her crease, Deepti ran her out. Earlier it was called Mankading, but now it is runout as per ICC rules.

Previous Oppo may launch Find X6 Series 2 new smartphones, know what is the news
Next First look poster of ‘Adipurush’ out, teaser to be released on this day