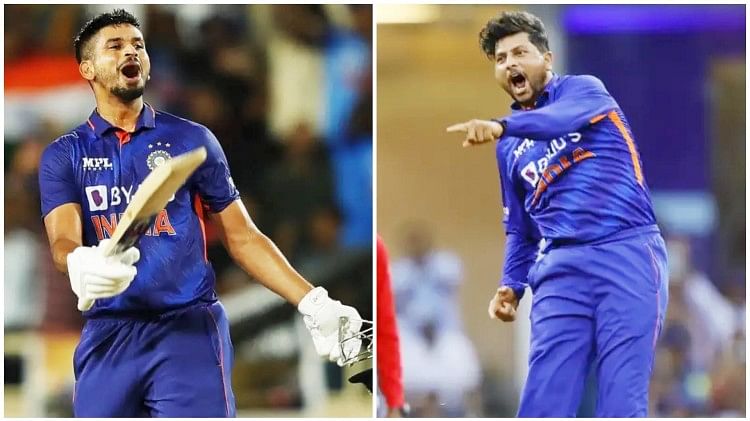 ICC has released the latest rankings. Indian batsman Shreyas Iyer climbed three places to 33rd. At the same time, spinner Kuldeep Yadav also jumped five places to reach the top 25 in the latest ICC men’s ODI rankings released on Wednesday. In the ODI series against South Africa, Shreyas scored 191 runs in three matches with the help of a century and a half-century. At the same time, Kuldeep took the maximum six wickets in three matches.

Sanju Samson also performed brilliantly in the ODI series. He has reached number 93 in the ranking of ODI batsmen. He scored 118 runs in three matches, including an unbeaten 86 in the first ODI. India lost this match. At the same time, Shikhar Dhawan, who was the captain of Team India in the ODI series against South Africa, has suffered a loss in the rankings. Dhawan has dropped six places to be at 17th position. At the same time, Virat Kohli and Rohit Sharma, who did not play the series, have also suffered.

In the ICC T20 rankings, New Zealand left-handed batsman Devon Conway has joined the top five batsmen behind Australia’s Aaron Finch and England’s David Malan. Conway is currently the leading run-scorer in the ongoing tri-series at home against Pakistan and Bangladesh. In four innings, he has so far scored 219 runs with two half-centuries and a best score of 70* runs. In the rankings for T20 batsmen, Mohammad Rizwan continues to top, Suryakumar Yadav at second place and Babar Azam at third place. South Africa’s Aiden Markram is in fourth place.

Rizwan started the tri-series with an innings of 78* but failed to make an impressive contribution after that. There is a gap of only 15 points between him and Suryakumar Yadav. At the same time, Babar is 30 points behind Suryakumar. Among bowlers in T20, England’s Mark Wood and Reece Tropley have benefited. Topley has moved up to 11th place. At the same time, Wood has also impressed since his return from injury and he has climbed 14 places to number 18. Wood took three wickets for 34 runs in the first T20 match against Australia. Earlier, he took six wickets in the seven-match T20 series against Pakistan.

Topley took two wickets in the T20I against Australia in Perth and is one of the leading wicket-takers for England in T20Is this year. He has taken 17 wickets this year. Among the English batsmen, Jos Buttler and Alex Hales also shared a 132-run partnership against Australia in the first T20. Butler jumped four places to No. 22, and Alex Hales has also reached the top 100.

Previous Infinix INBook X2 Plus: Slim and cheap laptop launched, know its price
Next 5 shocking things that could happen on SmackDown this week