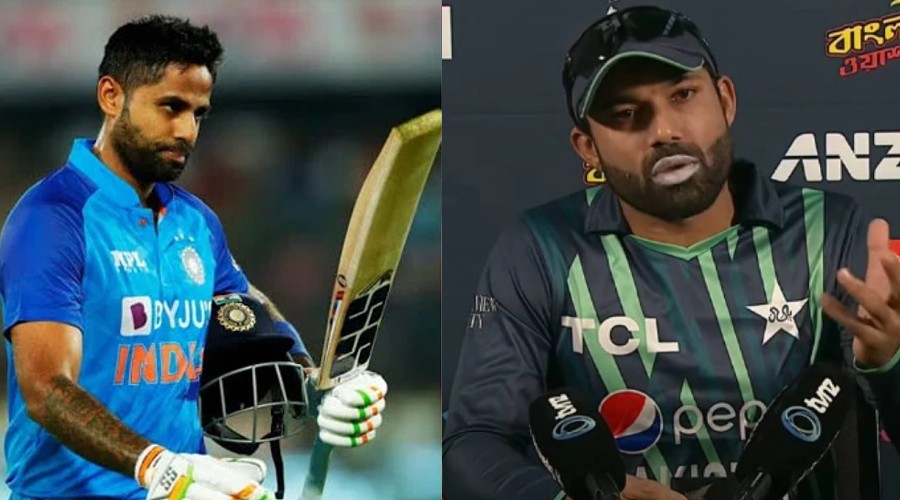 ICC T20 Rankings: Suryakumar Yadav vs Mohammad Rizwan How Indian Batter can snatch top spot during India vs Pakistan at MCG, see latest Batsman ranking | ICC T20I Rankings: Know how Suryakumar will snatch the No. 1 crown from Rizwan in T20 World Cup, see what is the latest ranking

Suryakumar Yadav vs Mohammad Rizwan, ICC T20 Rankings: Before the T20 World Cup 2022 being played in Australia, the ICC has released the latest ranking of the shortest format of cricket, in which 4 Indian batsmen, including Suryakumar, remain intact. In the latest T20 rankings released by the ICC, Suryakumar Yadav has retained his place and is at the second position. On Sunday, when he goes to play the T20 World Cup against Pakistan in Melbourne for the first time, he will be seen batting as the best batsman for India and the second best batsman in the world.

Rizwan can snatch the No. 1 crown in Melbourne

Pakistan’s opener Mohammad Rizwan (861 ratings points) is still at the top of the latest ICC rankings, who finished first in the T20 rankings with a consistent performance during the tri-series in New Zealand. He had increased the rating gap with Suryakumar (838 runs) on the basis of the performance of this series.

However, when they land on the MCG ground on Sunday, this fight will be seen between India and Pakistan as well as the best and second best player of T20. If Suryakumar Yadav scores a half-century in this match at a strike rate of more than 150 and Mohammad Rizwan fails to play a big innings, then Suryakumar Yadav will take the first place in the ICC T20 rankings.

Along with Suryakumar Yadav, KL Rahul (13), Virat Kohli (15) and captain Rohit Sharma (16) all retained their places in the latest update in the ICC T20 rankings. Pakistan captain Babar Azam remains in third place ahead of South Africa’s Aidan Markram and New Zealand’s Devon Conway. The only change in the top 10 came in the rankings of New Zealand’s Glenn Phillips, who jumped 13 places to be 10th on the back of his performances in the tri-series against Bangladesh and Pakistan.

Hardik Pandya retained his sixth position in the all-rounder rankings with 173 rating points. Bangladesh captain Shakib Al Hasan will enter the T20 World Cup as the top all-rounder. He removed Mohammad Nabi of Afghanistan from the top spot. Shakib topped the tri-series against New Zealand and Pakistan in which the veteran cricketer scored consecutive half-centuries during Bangladesh’s last two matches.

Not a single Indian in top 10 bowlers

The updated list of bowlers has not changed much inside the top 10, with Mujeeb ur Rahman (up two places to fifth) and South Africa’s Keshav Maharaj (up one place to eighth) moving up the rankings. have grown. Australian fast bowler Josh Hazlewood (705 rating points) has maintained his lead at the top of the bowlers’ rankings. He is followed by Afghanistan’s spinner Rashid Khan (696 points), Sri Lanka’s Wanindu Hasaranga (692) and South African veteran Tabrez Shamsi (688). India’s trio of Bhuvneshwar Kumar, Ravichandran Ashwin and Axar Patel are in the 12th, 22nd and 23rd places respectively.

Also read- Pakistan Cricket Board threatens BCCI, said – if this condition is not accepted, it will not play 2023 ODI World Cup