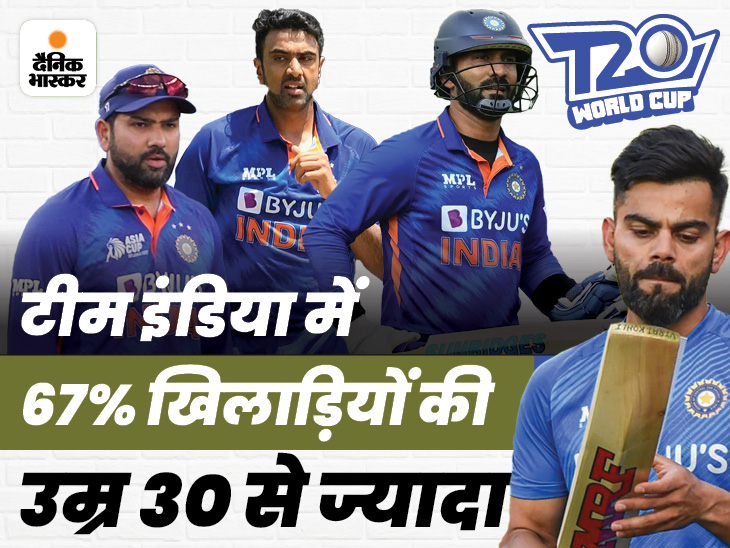 In 2007, the youth made the champion, this time the average age crossed 30 years. T20 world cup team India abandoned its own formula of success now more focus on experience

Team India has won the T20 World Cup title only once so far. Youngistan captured the title for the first and last time in 2007 under the captaincy of Mahendra Singh Dhoni. After that we expect the team to become the champion in every tournament but ultimately disappointment comes.

We are forgetting our own formula for becoming champions somewhere. We set the record for winning the title with the youngest team in 2007. This time a very old team has been sent. The average age of our team as of 2022 is above 30 years. With this age, till now India, no team in the world has won the title of this tournament. Now we are constantly giving preference to experience over youthful enthusiasm.

On this issue, we have also spoken to Sanjay Jagdale, who was the selector of the 2007 T20 team and fast bowler S. Sreesanth, who was a member of the team. You will read their opinion further. First let’s see how India’s performance has been in every T20 World Cup. Before that give your opinion in this poll of ours…

This time our oldest team will play
This time the Indian team has gone to Australia under the captaincy of Rohit Sharma to stake claim to become the champion. Captain Rohit himself is 35 years old, while the average age of the entire team is 30.6 years. There are 10 players (67%) in the 15-member team whose age is above 30 years.

This is the oldest team India has ever played in any T20 World Cup. When we became champions in 2007, the average age of our team was just 23.6 years. That is, a player of the team that won the title under the captaincy of Mahendra Singh Dhoni was on average less than 24 years old. This is the only World Cup in which the average age of Indian players was less than 24 years.

Dhoni was the youngest captain, Rohit the oldest
When India won the World Cup 15 years ago, the captain of the team was Mahendra Singh Dhoni. He was 26 years old at that time. Since then, in every tournament, the age of the Indian captain has been more than this. This time Rohit is going to make the record of India’s oldest captain in T20 World Cup.

The selector said that in 2007, he had prepared a mixture of experience and youthful enthusiasm.
Sanjay Jagdale, who was a member of the selection committee of Team India in 2007, said in a conversation with Bhaskar that choosing the team for the T20 World Cup for the first time was a completely different experience. He said- Then legends like Sachin Tendulkar, Sourav Ganguly and Rahul Dravid had withdrawn from the tournament. He believed that India should send a team of young players to this tournament. After this the team was selected under the captaincy of Dhoni.

The team also included players like Yuvraj Singh, Virender Sehwag, Harbhajan Singh who had seven to eight years of experience in international cricket. There, S. Players who played very few matches like Sreesanth, RP Singh, Yusuf Pathan, Joginder Sharma, Robin Uthappa, Rohit Sharma were also present in the team. Apart from batting and bowling, the team was very energetic in fielding and the players were more excited about the new format due to the low average age.

This is the first Indian team to participate in the T20 World Cup.

This is the Indian team that went to participate in the T20 World Cup in 2022.

Success doesn’t come from experience alone: ​​Sreesanth
Fast bowler S.K., who took 6 wickets in the 2007 T20 World Cup. Sreesanth also agrees that experience alone does not lead to success in this tournament. Sreesanth said that in 2007 the Indian bowling lineup was completely new. Apart from him, RP Singh, Irfan Pathan and Joginder Sharma had the command of fast bowling. But this young trio gave the team a success that India never got after that.

Couldn’t even play semi-finals four times
Now let us know how far the Indian team has been able to travel in the World Cup held so far. India has traveled to the semi-finals or beyond in just three World Cups out of seven. In 2009, 2010, 2012 and 2021, our team crashed out in the group stage itself. In 2007 we became champions. In 2014, India had reached the final, while in 2016 we lost in the semi-finals at home. The average age of Team India in 2014 was the lowest in the last four tournaments.

It has the most effect in fielding. Young players have more fresh bodies than mature players. If a player of 30 years or older runs after the ball, then he takes more time. Which makes it easy to convert 1 run into 2 or 3 runs. At the same time, young players reach the ball quickly with their quickness. 1-1 runs in T20 format means a lot. That’s why young players generally prove to be better in this format.

Previous Samsung is bringing the cheapest 5G smartphone, specifications revealed
Next Smartphone Tips And Tricks Things To Avoid To Save Mobile Battery From Blast