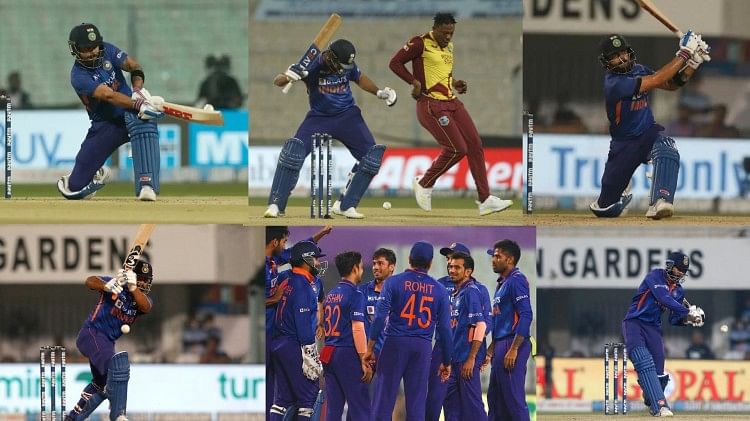 The second match of the three T20 match series between India and West Indies was played in Kolkata. In this match, the Indian team defeated West Indies by eight runs to register their 100th victory in the shortest format of cricket. Rishabh Pant, Virat Kohli and Venkatesh Iyer batted brilliantly for India. Bhuvneshwar Kumar, Ravi Bishnoi and Yuzvendra Chahal did wonders with the ball. With this win, India has won the T20 series. The West Indies team has lost five consecutive matches on the tour of India. Now by winning the last match of the tour, the Caribbean team would like to end their India tour with a win.

Batting first after losing the toss, India scored 186 runs for the loss of five wickets in 20 overs. Rishabh Pant played an unbeaten innings of 52 runs in 28 balls for India. This was the third half-century of his T20 International career.

Venkatesh Iyer played an aggressive innings of 33 runs in 18 balls. He shared a partnership of 76 runs in 35 balls with Pant for the fifth wicket. Venkatesh Iyer hit four fours and a six in this innings. In this match he batted at a strike rate of 183.33.

West Indies got the first blow at the score of 34 runs in the sixth over. Yuzvendra Chahal caught Kyle Meyers off his own ball. Chahal bowled brilliantly for India in the last match as well. In this match too, Chahal got India off to a good start.

West Indies wicket-keeper batsman Nicholas Pooran was dismissed for 62 off 41 balls off Bhuvneshwar. Pooran was looking very dangerous, but Ravi Bishnoi caught him off Bhuvi and sent him to the pavilion. After this Suryakumar Yadav and Venkatesh Iyer were seen having fun with him.

Previous gmail tips and tricks: if gmail doesn’t work properly then do this
Next Mehjabi Siddiqui on hijab row and bikini: mehjabi siddiqui who quit glamour world speaks up about hijab row sana khan and mental peace -Exclusive: Mehjabi, who quit TV for Islam, said – Why not hijab if you have the right to wear a bikini?