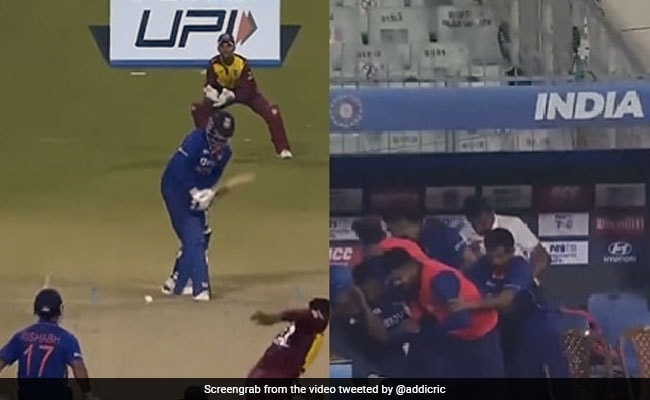 This shot of Venkatesh Iyer won the hearts of the fans

IND vs WI 2nd T20I: Captain Rohit Sharma (Rohit Sharma) after India’s victory in the second T20 Venkatesh Iyer fiercely is praised. Rohit said that such a player is needed from Team India who can play an important role for the team by contributing equally with bat and bat. In fact, in the second T20, Venkatesh played a quick innings of 33 runs in 18 balls, which included 4 fours and a six. Due to Iyer’s explosive innings, Sun was able to score runs at the last minute and was successful in taking the score to 186 runs. Although Rohit did not get Venkatesh to bowl in the second T20, but after the match the hit man said that Venkatesh wanted to bowl. Rohit has liked this style of Venkatesh very much.

Indian team made a record in T20I, became the second team in the world to do so, did this feat faster than PAK

Let us tell you that Venkatesh Iyer, on the other hand, has played a tough shot during his batting, which is being praised a lot. In fact, in the 16th over of India’s innings, Iyer hit the ball of Sheldon Cottrell on fine leg by playing a great four-flick shot. Whose video has surfaced on social media.

In the video, on the third ball of India’s 16th over, Iyer played a flick shot off Cottrell, which went straight towards the fine leg boundary for a boundary. The special thing in this video is that all the players sitting in the dugout got scared after seeing his shot. Actually it happened that India’s dug out was on the fine leg boundary itself, where many players were sitting. IND vs WI: Rohit avoided being run out due to Kohli, then Virat took a jibe at Pollard and the captain laughed – Video

In such a situation, when Iyer hit this shot, the ball went fast towards the dug out, in such a situation, the Indian players were seen to avoid hitting each other to avoid the ball, in this sequence Chahal also fell. This video is becoming very viral on social media. Fans are also enjoying a lot. Especially Chahal’s reaction is very much liked by the fans.

Ranji Trophy 2022: ‘Bihari’ created history, made world record in debut match, became the first player to do so

thrill of the last over
Let us tell you that West Indies needed 25 runs in the last over to win. India captain Rohit Sharma gave the responsibility of getting the last over to Harshal Patel. This young bowler kept the hope of his captain and gave India victory by giving only 16 runs. After this Rohit hugged Harshal.