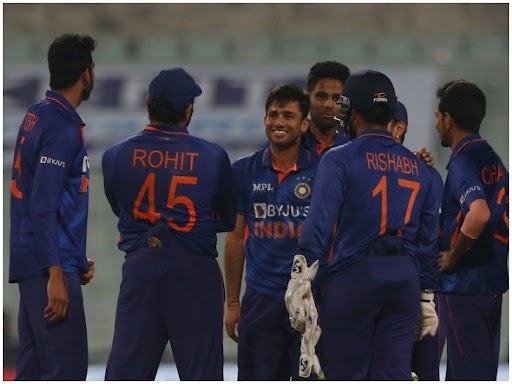 Ravi Vishwanoi, playing the first match, took two wickets in the same over.

In the first T20 match between India and West Indies, Rohit Sharma has won the toss and decided to bowl. West Indies scored 95 runs in 14.3 overs for the loss of 5 wickets. Nicholas Pooran and captain Kieron Pollard are present at the crease.

Click here to see live score of the match

Brandon King was caught by Bhuvneshwar Kumar in the very first over at the hands of Suryakumar Yadav. Yuzvendra Chahal dismissed Kyle Meyers (31) LBW in the fifth ball of the seventh over. Ravi Vishwanoi gave India the third success in the 11th over by dismissing Ruston Chase LBW. Vishnoi is playing his debut match and this is his first international wicket. On the fifth ball of the same over, he also made Rovman Powell walk the pavilion. Deepak Chahar took the wicket of Akil Hossain in the 14th over.

Bhuvneshwar Kumar shocked West Indies in the very first over of the match.

From India, leg-spinner Ravi Bishnoi has got a chance to make his T20 debut. He became the 95th Indian player to play in this format. Yuzvendra Chahal gave him the debut cap. However, KKR captain Shreyas Iyer failed to make it to the playing XI. Kolkata on Wednesday appointed Iyer as the new captain of the team for IPL 2022. Click here to read full news

All the matches of the ODI series were played without spectators, but 75% of the fans have been given entry in the T20 series.

Click here to see live score of the match

Kohli’s form a big concern
Virat Kohli, the former captain of Team India, could not perform anything special in the ODI series. In such a situation, a big innings will be expected from this player in today’s match. Kohli’s last century came against Bangladesh at the same ground in November 2019.

Apart from Kohli, the team will also have high hopes from Suryakumar Yadav. One-day series Surya was in good form. In the spin department, Yuzvendra Chahal will once again be the focus, who made a comeback in the ODI series.

Pollard’s team would like to win the first match
After the flop show in the ODI series, the West Indies team led by Kieron Pollard will look to do better in their T20 series. All-rounder Jason Holder has been in good form and took four wickets in four balls in the last match of the T20I series against England. Apart from Holder, the team has all-rounders like Odion Smith, Akil Hossain and Pollard.