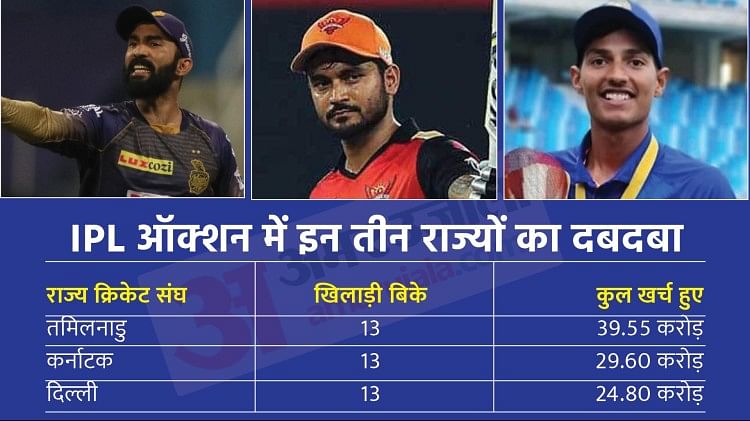 Here are the major players of Tamil Nadu sold in the auction
At the same time, Tamil Nadu team also reached the final of Vijay Hazare Trophy. Shahrukh Khan, Dinesh Karthik and Washington Sundar were the major sellers from this state cricket association in the auction. Eight out of 13 players touched the one crore mark. These include three uncapped players.
Karnataka and Delhi players also dominated
A total of Rs 39.55 crore was spent by the franchises in buying Tamil Nadu players. At the same time, Manish Pandey and Devdutt Padikkal were among the important players sold in the auction from Karnataka. A total of Rs 29.60 crore was deducted from the purse of the franchises to buy the players of this state cricket association. Delhi has always dominated the auctions. The same thing happened this time as well.
Auction was also well liked by the players of UP.
Shikhar Dhawan, Nitish Rana and Yash Dhul were the key players sold by the Delhi Cricket Association. Franchisees spent around Rs 24.80 crore to buy players from this state. The players of UP were also well-liked by the franchises. A total of 12 players of this state cricket association were sold and a total of Rs 22.70 crore was spent on them. The important players of UP who will be seen in IPL are Bhuvneshwar Kumar, Shivam Mavi, Yash Dayal.
Players from Punjab and Rajasthan also sold
Apart from this, 11 players of Punjab Cricket Association were sold. A total of Rs 14.70 crore was spent in buying them. Among them Abhishek Sharma, Harpreet Brar, Mayank Markandeya, Gurkeerat Singh Mann are prominent. Apart from this, nine players each from Rajasthan and Mumbai Cricket Association were also sold in the auction.

Cricketers of these states did not find any buyer
No one has bought a single player of 10 State Cricket Association out of 38. This includes Arunachal Pradesh, Services, Mizoram, Puducherry, Uttarakhand, Manipur, Meghalaya, Nagaland, Tripura and Sikkim Cricket Association.

Previous Tecno Pova 5G 10: Full Rs 10,000 off on this smartphone with 50 MP camera and 6000 mAh battery – Tecno Pova 5G gets bumper discount on amazon
Next Shahrukh Khan was forced to mess with Ambani’s son, the gathering became an insult