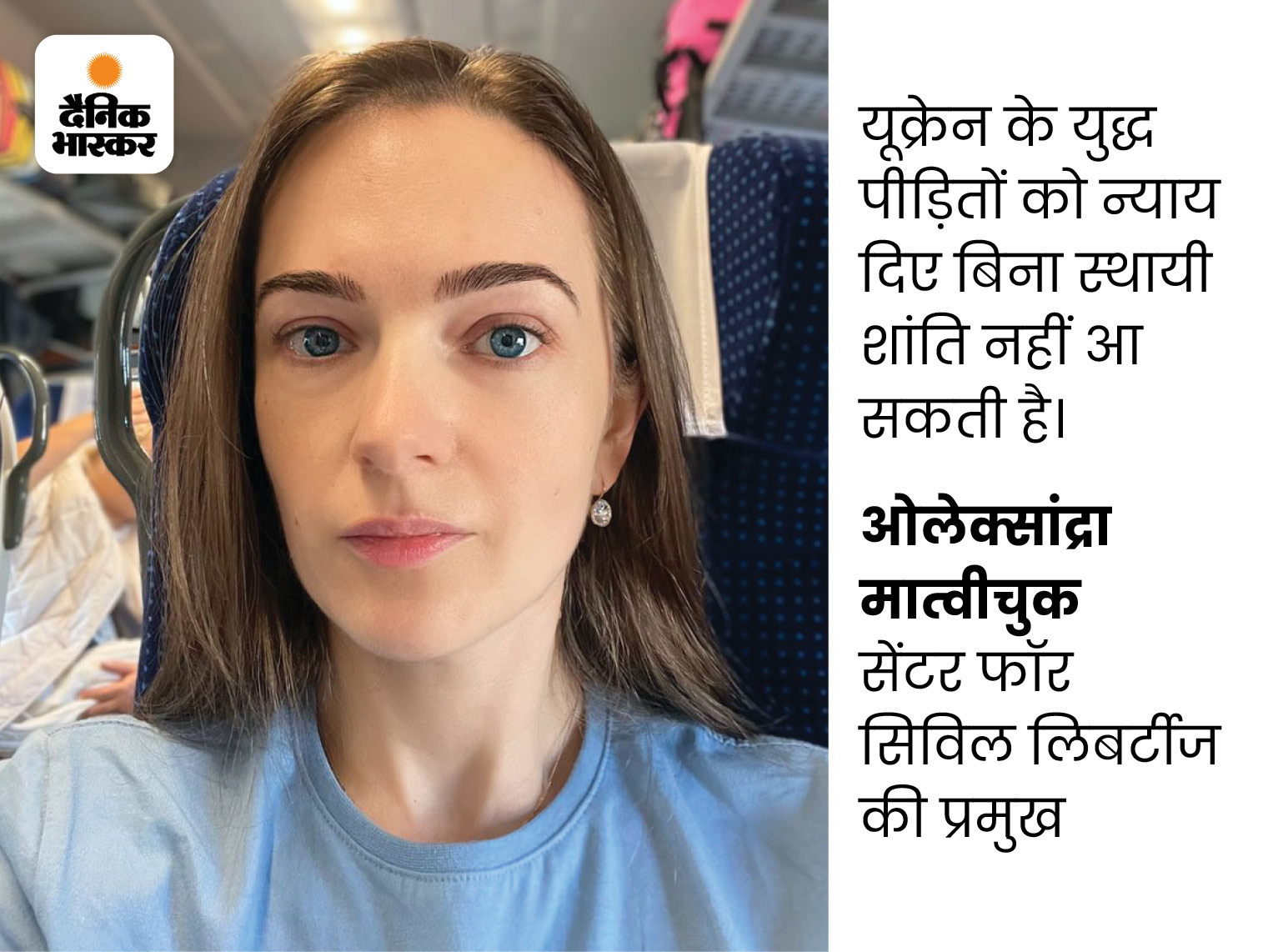 Two organizations of Ukraine and Russia, who have been fighting a war for 7 months, have received the Nobel Peace Prize. The award was announced on Friday. Ukraine’s organization Center for Civil Liberties working against war crimes is also named among the winners.

Oleksandra Matveychuk is the head of this organization. She has been raising human rights issues even before the Russian attack on Ukraine. She was in Kyiv, the capital of Ukraine, at the start of the war. He had to hide in the bunker amidst raining missiles. She was on the train and was going from Poland to Kyiv when the Nobel Prize was announced.

Told Bhaskar – Russian missiles are raining in Kyiv
Bhaskar spoke to Oleksandra when the Ukraine-Russia war started. At that time he took shelter in a bunker in Kyiv. Oleksandra, while describing the situation at that time, said that the spirit of the people here remains intact. There has been a mass exodus from Kyiv. People have gone to the border of Poland.

High-rise buildings have been evacuated and people have been advised to stay in metro stations-bunkers. Most of the people are in bunkers. Common people are being killed in war. A major humanitarian crisis is brewing in Ukraine. There is a terrible bombing of Kyiv. Russia is firing missiles at Ukraine from Belarusian soil.

39-year-old Oleksandra was also active in Ukraine’s pro-democracy movement. He received the Jur Linderbreke honor of Norway in 2014.

Oleksandra helping people in the midst of war
Russia invaded Ukraine in February and surrounded the capital Kyiv. Then Oleksandra started running from all over the country to help the people reaching Kyiv. Oleksandra became the face of opposition to Putin and Russia. She also continued to support Ukraine in the international media.

Came into the limelight for the first time in 2013
Oleksandra has been a consultant in the Human Rights Commissioner’s Office of Ukraine. She publishes annual reports on human rights issues in Ukraine. The Euromaidan movement against the pro-Russian president began in Ukraine in November 2013. Then Oleksandra ran an emergency center to help the people. On 30 November, the government attacked protesters in Kyiv. After this, Oleksandra came in the discussion.

Putin should be prosecuted: Oleksandra
After being selected for the Nobel Peace Prize, Oleksandra said – Russia should be expelled from the UN Security Council for violating the Human Charter. The United Nations should do justice to war victims.

Russian President Putin, Belarus President Lukashenko and other war criminals should be tried by an International Tribunal. Permanent peace cannot come without justice for the victims of Ukraine.

Center for Civil Liberties was established in 2007

The Center for Civil Liberties worked to identify and document war crimes following Russia’s invasion of Ukraine in February.

Alice Belyatske, a human rights advocate from Belarus, has also been selected for the Nobel Peace Prize. Alis started the Democracy Movement in 1980 against the dictatorship of Belarus. They are still fighting the battle to restore true democracy in their country.

It raised the voice for political prisoners from Stalin’s time till now. When Russia invaded Chechnya and the organization’s Natalia Estemirova was killed in 2009, the organization raised its voice globally. The Russian government describes it as an organization of foreign spies.

1. Three people from India were also nominated for the award

Time magazine had informed about the names of three people from India in the race for the Nobel Peace Prize. Among them were the fact-checkers Mohammad Zubair and Prateek Sinha, besides Harsh Mander of Caravan-e Mohabbat Sanstha, who worked against communalism. However, all three Indians did not get the Nobel.
Read full news…

2. Zubair’s name was in discussion but Nobel was not found, 7 cases including inciting religious sentiments against him
Time magazine also mentioned the name of Mohammad Zubair for the Nobel Peace Prize. He works in a fact checking website named ‘Alt News’. Zubair has been in constant controversies. He was arrested for inciting religious sentiments. After spending 22 days in jail, he is currently out on interim bail from the Supreme Court.
Read full news…

Previous Vicky Kaushal Childhood Photo With Shah Rukh Khan On Sets Of Ashoka Photo Viral
Next Redmi series’s first Android tablet at a low price, will get many great features