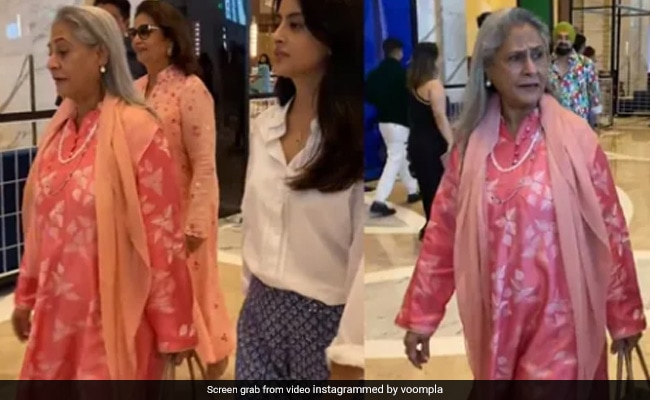 Seeing the media, once again Jaya Bachchan got angry

Jaya Bachchan has once again come under the target of social media users. Jaya Bachchan arrived with her granddaughter Navya Naveli Nanda on the last day of Lakme Fashion Week in Mumbai. Here the media and paparazzi started taking her pictures and videos, on which the actress got angry. It is seen in the video that Jaya Bachchan is moving forward with Navya Naveli, when the paparazzi move towards her to take a photo. In the shared video of ‘Voompla’, you can see that Jaya is seen pointing fingers at them as soon as they see the camera. He asked, ‘Who are you guys? Are you from the media?

This video of Jaya Bachchan is becoming increasingly viral on social media. After the video surfaced, a fan commented, ‘Why do you guys even cover them? She always talks like this. Don’t give them so much importance, don’t cover them.
Please tell that Jaya Bachchan shares a good bond with Navya. Currently, she is appearing in Navya’s ongoing podcast What the Hell Navya with daughter Shweta Bachchan. In an episode of the show, Jaya revealed that her grandson Agastya Nanda often watches Khushi Kabhie Gham and even makes fun of Jaya.

Recently, Jaya Bachchan celebrated the 80th birthday of Amitabh Bachchan with her entire family. She also gave him a cute surprise along with Abhishek Bachchan on the sets of Kaun Banega Crorepati.

Previous Redmi A1 Plus Sale Started in India know about smartphone price specifications and features | Redmi A1 Plus: Sale of Redmi’s new budget smartphone starts, bumper discount is available on the first day, know features and price
Next Nuclear Attack on Ukraine: Is Putin preparing for a nuclear attack? Why are Russian soldiers stationed in Belarus