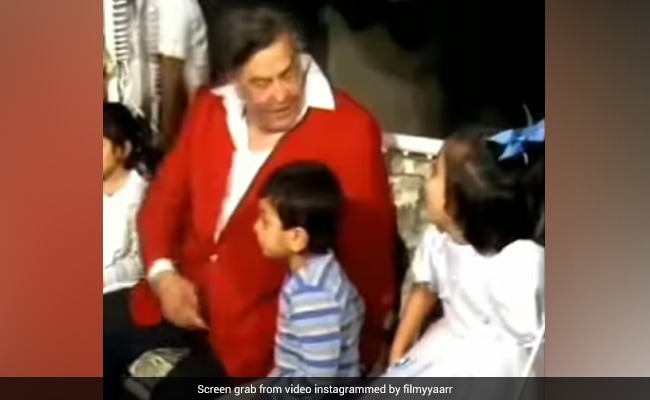 Many videos of film stars go viral on social media. One such video has once again come into the limelight. Everyone knows that the Kapoor family is the biggest in Bollywood and has been ruling the industry for years. Many well-known superstars have emerged from this family. The bonding of Kareena Kapoor and Ranbir Kapoor is special. The tremendous chemistry between the two has also been seen on Koffee With Karan. But you know that even in childhood, there was a special bond between Ranbir and Kareena. A video is becoming increasingly viral on social media at this time, in which Kareena and Ranbir can be seen. In this video, both are small and are seen with grandfather Raj Kapoor.

People are very fond of this throwback video of Kareena and Ranbir’s childhood. In this video you can see that Ranbir and Kareena are sitting on the swing with their grandfather Raj Kapoor. Raj Kapoor tells Ranbir, ‘Dada speaks, come wearing good clothes’. On which little Ranbir says, ‘I will take a bath and wear it tomorrow’. On which you will also be left laughing after seeing Kareena’s shocked reaction. This video has received millions of likes, on which users are giving their feedback.

Commenting on the video, a social media user wrote, ‘Kareena was so cute in her childhood. That’s why they have cute kids like Taimur and Jeh. So another wrote, ‘Both are very cute’. So there another user writes, ‘Kareena was poo from childhood’. Many such lovely comments have come on this video.