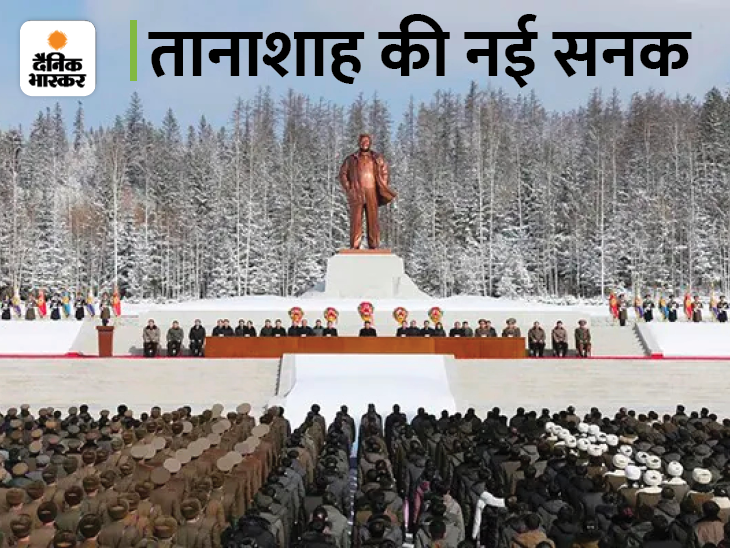 Another image of North Korean dictator Kim Jong Un has come to the fore. Thousands of people stood in the freezing cold on the birth anniversary of his father Kim Jong Il. Kim’s father died in the year 2011.

Thousands of people who arrived at the event on the birth anniversary of Kim Jong Un’s father, Kim Jong Il, stood in the shivering winter.

Programs on the 80th birth anniversary of Kim Jong Un’s father Kim Jong Il took place in North Korea’s Samjian city. Thousands of people stood in front of his statue to listen to dictator Kim’s speech. People stood for 30 minutes in a temperature of about -15 degrees without wearing gloves or hats and Kim Jong Un glorified his father’s work.

People stood in the program without covering their ears and without wearing gloves in their hands.

Flower shows and other cultural programs are organized during the ‘Day of Shining Star’ event. For this, many artists had to perform in freezing cold water.

During the event, the artists performed in water.

According to reports, electric wires were seen at the place where Kim was sitting, which could possibly be from the heater. It is believed that dictator Kim has made arrangements to protect himself from the cold.

During the ‘Day of Shining Star’ event, Qin Jong Un had an electric wire on his stage.

The birth anniversary of Kim Jong-il is one of North Korea’s most important holidays. For even the smallest mistake on this occasion, dictator Kim Jong-un gives harsh punishment.

Gardeners punished on father’s birthday
The ever-used flowers did not bloom on the birth anniversary of the late North Korean leader Kim Jong-il. Angered by this, Kim Jong Un sentenced the gardeners. Many gardeners were sent to labor camps when the flower ‘Kimjongilia Begonia’ did not bloom. These camps are 24-hour prisons.

The flowers used at the event in the city of Samjian did not bloom, after which the gardeners were punished.

that’s why flowers don’t bloom
Han could not find firewood to adequately heat the greenhouses during the winter months, and the plants died as a result. Along with him, many other gardeners have also been sent to the labor camp.