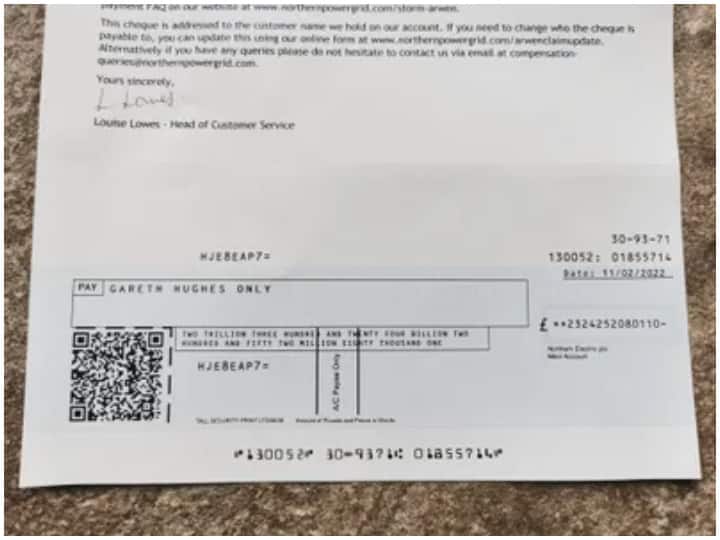 A UK company mistakenly sent checks worth lakhs of crores to 74 customers who faced power cuts during the storm. A customer named Gareth Hughes shared the picture of the check on Twitter in which ₹235 lakh crore was written in the amount. This amount is surprising everyone.

When Hurricane Arwen wreaked havoc in Britain, the electricity went out to the house of Gareth Hughes, a resident of Hebden Bridge. In such a situation, he was expecting compensation from the electricity supplier, so he got this surprising check. Everyone is getting shocked after hearing this amount.

Hughes shared a picture of the check sent to him by Northern PowerGrid on Twitter. He wrote: “Thank you @Northpowergrid for paying our compensation for several days we were without power after #stormarwen before I banked the check, however, are you 100% sure you can afford it? #trillionpound”

Thank you for our compensation payment @Northpowergrid for the several days we were without power following #stormarwen Before I bank the check however, are you 100% certain you can afford this? #trillionpounds pic.twitter.com/z5MNc2Nxl1

Along with this, according to reports, it is being told that Hughes was not the only customer who received the wrong check from the energy supplier. Reports said that Northern PowerGrid apologized to 75 of its customers after sending wrong checks to them.

The figure for the check that Hughes received was £2324252080110 (two trillion three hundred twenty four billion two hundred fifty-two million eighty thousand one). Some people responded to Hughes’ tweet, saying they knew other people who received checks of similar value.

One user wrote, “You might want to check what other payments you made, as I know of at least four other checks of similar value sent to neighboring properties.” Another user quipped that Hughes should have banked the check.

Watch: The youths had to show stunts in the middle of the dance, it happened that the laughter of the people was missed

Watch: While walking on the road, suddenly a person’s car started flying in the air like an eagle, if you are not sure then see it yourself