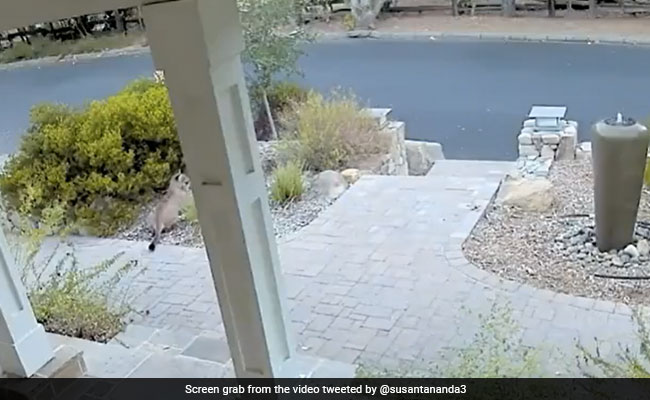 On seeing the person, the mountain lion hid in the bushes

mountain lion video: People have always had this belief that lions attack humans just on sight. But many videos available on the internet prove something else. In those videos, animals can be seen ignoring them in the presence of humans and that’s how nature works. Now, a video of a mountain lion hiding in the bushes after seeing a man deepens the truth and you must watch it too.

A clip shared on Twitter by IFS officer Susanta Nanda shows a mountain lion hiding near a house in broad daylight. Footage captured on a doorbell camera showed the animal quickly hiding behind bushes after seeing a man walking along the road. The animal waits patiently until the person leaves.

Wild animals will avoid conflict with humans in a majority of situations. They react only when threatened…
Interesting video of a mountain lion watching the runner after getting totally camouflaged to avoid conflict.
Via the unexplained pic.twitter.com/wARdjjPqSG

The caption reads, “Wild animals will avoid conflict with humans in most situations. They only react when threatened. Interesting video of a mountain lion watching a runner after completely hiding to avoid conflict . “

The video has been viewed more than 53 thousand times and many comments are also coming on the video. People were surprised to see the patience of the lion. Many people wrote about how the human-animal harmony was visible in the clip.

Previous If you plan to buy iPhone 14 Pro Max, then first know everything
Next Redmi Note 11R launched know it price specifications and features details | Redmi Note 11R Price in India: The movie looks like a cinema hall on this 5G smartphone of Redmi, know the price