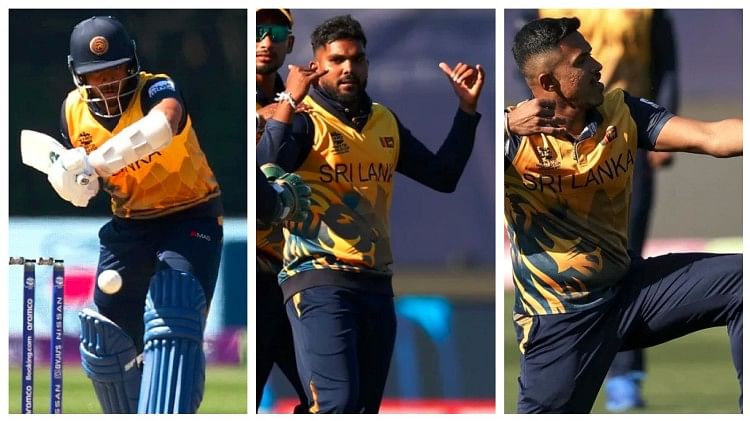 Sri Lanka beat Netherlands by 16 runs in a thrilling match. With this win, he has four points in Group A and has reached Super-12. However, it is not yet decided in which group Sri Lanka will go in the Super-12. If Namibia’s team wins the match against UAE by a big margin, then the Lankan team will go to Group-2 of India. On the other hand, if Namibia loses or wins by a margin of lesser runs, then Sri Lanka will go on top of Australia’s Group-1.

Batting first, Sri Lanka scored 162 for six in 20 overs. For him, opener Kusal Mendis played the highest innings of 79 runs. Chasing the target of 163 runs, the Netherlands team could only manage 146 runs for nine wickets in 20 overs. Her Max Odad struggled alone. Odad scored an unbeaten 71 off 53 balls, but could not lead the team to victory. Netherlands wickets kept falling from the other end. Due to this the team had to face defeat. Captain Scott Edwards contributed 21 runs. Wanindu Hasaranga took the highest three wickets for Sri Lanka. Mahish Teekshana got two successes.

After 15 overs, Sri Lanka have completely taken hold of the match. Tim Pringle was run out on the last ball of the 16th over. Pringle scored two runs off four balls. After him, Tim van der Guggen returned to the pavilion in the 17th over. Guggen was clean bowled by Hasaranga. Hasranga then clean bowled Fred Klaasen (3). He took three wickets for 28 runs in four overs. Netherlands scored 109 for eight in 17 overs. They have to score 54 runs in three overs to win.

Netherlands captain Scott Edwards has returned to the pavilion. He scored 21 runs in 15 balls. Edwards was clean bowled by Binura Fernando. Netherlands scored 102 for five in 15 overs. He needs 61 runs in the last 30 balls to win.

Netherlands got the fourth blow in the 12th over. Mahish Teekshana gave a big breakthrough to Sri Lanka by dismissing Tom Cooper. Cooper scored 16 runs in 19 balls. After his dismissal, captain Scott Edwards has come to the crease. Netherlands scored 81 for four in 13 overs. They need 81 more runs in seven overs to win.

NED vs SL T20 Live: Half over of Netherlands innings ends

Half over of Netherlands innings is over. He has scored 63 runs for three wickets in 10 overs. The team has to score 100 runs in the remaining 60 balls to win. Max Odddod is unbeaten on 23 off 21 balls and Tom Cooper on 13 runs off 14 balls.

Spinner Mahish Teekshana got the first success for Sri Lanka. He dismissed Vikramjit Singh on the fifth ball of the fourth over. Vikramjit could only score seven runs in 14 balls. Lahiru Kumar dismissed Bass de Lead (14) on the last ball of the sixth over. After this, on the third ball of the seventh over, Wanindu Hasaranga sent Colin Ackerman (00) to the pavilion.

Batting first after winning the toss, Sri Lanka scored 162 for six in 20 overs. He set a target of 163 runs for the Netherlands to win. Kusal Mendins scored the most runs for the Lankan team. He scored 79 runs in an innings of 44 balls. He hit five fours and five sixes. During this, Kusal’s strike rate was 179.55. Apart from him, Charit Asalanka contributed 31, Bhanuka Rajapakse 19 and Pathum Nisanka contributed 14 runs. Captain Dasun Shanaka was dismissed for eight runs. Dhananjay de Silva could not open the account. Wanindu Hasaranga scored five not out and Chamika Karunaratne scored two not out. Paul van Meeckeren and Bass de Leed took two wickets each for the Netherlands.

Sri Lanka scored 109 runs for three wickets in 15 overs. Kusal Mendis scored his ninth fifty of his T20 career. He is unbeaten on 59 off 36 balls. At the same time, Bhanuka Rajapaksa has scored two runs in two balls. Charit Asalanka scored 31 runs off 30 balls, got out on the first ball of the 15th over.

Sri Lanka scored 66 for two in 11 overs. The team is scoring six runs per over. That wouldn’t be enough for him. Kusal Mendis is unbeaten on 33 off 25 balls and Charit Asalanka on 16 off 19 balls. Now both need to score runs fast.

Sri Lanka suffered two consecutive blows in the seventh over. Paul van Meeckeren dismissed Pathum Nisanka and Dhananjay de Silva in the third and fourth balls. Nisanka got clean bowled after scoring 14 runs off 21 balls. After that Dhananjay de Silva was out lbw without opening the account on the first ball. Sri Lanka scored 41 for two in seven overs. Kusal Mendis 23 and Charit Asalanka are unbeaten on one run.

Sri Lankan openers Pathum Nisanka and Kusal Mendis are batting. The team has not suffered a single setback so far, but both are not scoring runs fast. Netherlands bowlers have kept both of them tied so far. The Lankan team has scored 21 runs without any loss in five overs. Mendis is unbeaten on 14 off 14 balls and Nisanka is unbeaten on eight runs off 16 balls.

Sri Lanka captain Dasun Shanaka has won the toss against Netherlands. He has decided to bat first.

NED vs SL T20 Live: Both the teams are as follows

Hello, welcome to Amar Ujala’s live blog. The ninth match of the T20 World Cup will be played in Geelong between Sri Lanka and the Netherlands. For both the teams in Group A, victory in this match is essential. The Netherlands are at the top of the table with four points, but their net run-rate is lower than Sri Lanka and Namibia. In such a situation, if he loses the match, he can be out of the tournament. Sri Lanka, on the other hand, have only two points. He needs to win by all means to go ahead.