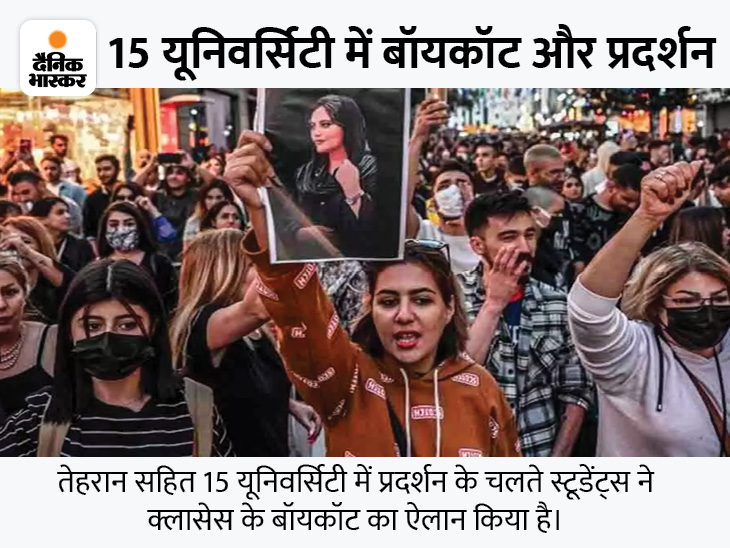 Now the fear of a coup increased; The top commanders of the army sent their families to the safe house. Iran Hijab Protest |protest against hijab in Iran intensified, possibility of coup, Iran News

Anti-hijab protests in Iran spread to more than 35 cities for the 12th day on Tuesday. The fear of a coup intensified. In such a situation, the top commanders of the Iranian Army Revolutionary Guards have sent their families from the cantonment areas to the safe houses. These families are being provided round-the-clock security at the guest house of an oil company in Tehran.

According to sources, these families have been assured that if the demonstrations continue or if there is a coup, they will be safely deported to neighboring Georgia.

The government is using force on the protesters
President Rahisi’s government continues to use force in several cities on anti-hijab protesters. The death toll has risen to 80 and the injured to more than 500. More than two thousand have been arrested. Demonstrations are also going on in many countries in support of Mahasha Amini, who was killed in the custody of the Iranian Moral Police.

Mahasha Amini, whose death has brought revolution in Iran.

Chief Justice confessed – Iranian police force was battered, morale was also broken
Iran’s Chief Justice Mohseni AG has admitted that the police force has been battered by the protests that have been going on for the past almost two weeks. In a viral video, AG is speaking to someone on the phone that the morale of the police is broken. The policemen are tired due to not getting holidays. The protesters are not being controlled.

Yalda, a protester imprisoned in the infamous Karchak prison, feared murder
Hijab protestors are imprisoned in Tehran’s infamous Karchak prison. Photojournalist Yalda Moyari secretly released an audio saying that food and water are not being given to the protesters in the jail on time. Yalda feared that he might be murdered. No record of hijab opponents has been given to their family members.

Karchak Jail: In this, the opponents of the Islamic government are imprisoned. According to the UN report, 55 protestors are hanged here every year.