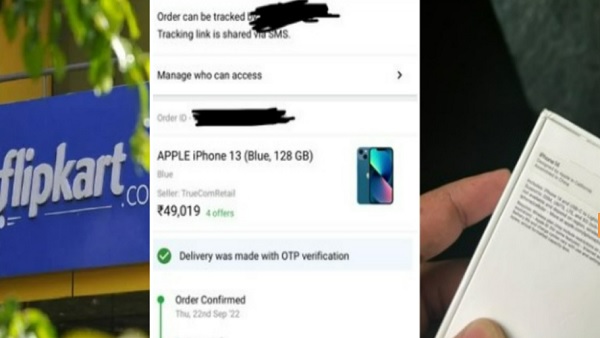 Customer happy as soon as the packet is opened

A tweet is becoming quite viral on social media. According to the tweet, a customer ordered an Apple iPhone 13 128 GB phone. But when the customer opened the box, his luck shone. Instead of iPhone 13, he got a packet of iPhone 14.

Let us tell you that people do a lot of shopping during the festive time. There are times when there is an error in this. But often customers complain against the company online. It rarely happens that the fate of the customer shines because of the company’s fault. But this time the same thing happened.

Used to complain earlier, this time…

Where customers don’t get what they normally order, complain about defects or otherwise. For this, customers take the help of social media. But here, when the fate of a customer opened, it has also started getting discussed a lot on social media. When Flipkart gave him iPhone 14 instead of 128 GB of Apple iPhone 13, he is getting a lot of praise in return for the complaint.

Many people on the Internet have compared the event to “lucky” winning the lottery. Several others jokingly suggested that this had more to do with the similarity in appearance of later iPhone models. One commented that the iPhone 13 and 14 are so similar that Flipkart mistook 14 as 13 and delivered 13 instead.

Users are taking a pinch

Another user quipped that even Flipkart knows it is the same phone. Internet users are taking a lot of jokes on social media. At the same time, customers are happy to get the iPhone 14 instead of the iPhone 13. Looks like his luck woke up in the festive season.