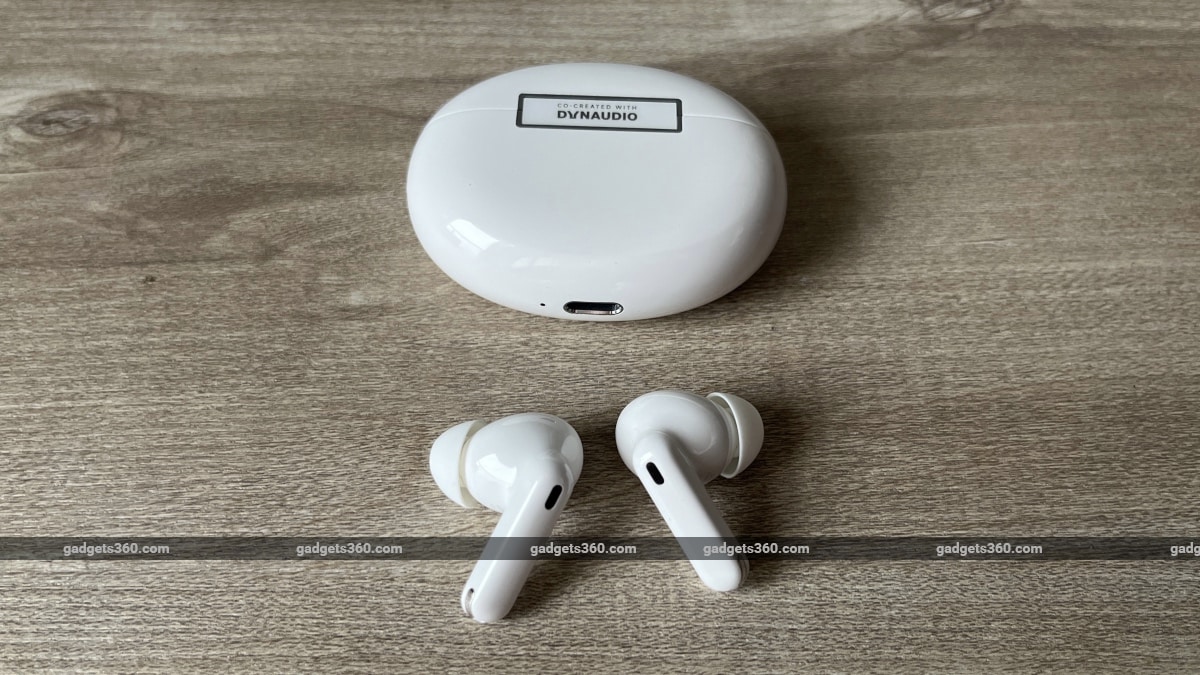 Mainstream true wireless earphones can go from 1000 rupees to 20 thousand rupees in today’s time. Obviously, the more you spend, the better you’ll get audio performance and advanced Bluetooth codec support, along with features like active noise cancellation and wireless charging. Over the past few months, we have seen that even the budget and mid-range brands are offering value for money with their launches that offer flagship grade performance and features at an affordable price. The product that I am going to review here also promises exactly the same.

The price of Oppo Enco X2 in India is Rs 10,999. It has a dual driver setup with dynamic planar magnetic drivers, advanced Bluetooth codec support and support for Danish loudspeaker maker Dynaudio. If you look on paper, then it has those features which are seen in the big and premium TWS segment. But does it deliver the same value as it promises? Find out in this review.

The design of Oppo Enco X2 is inspired by the Oppo Enco X that came before it. But some minor changes have been made in it which differentiate both the models. Some of these changes, such as the earpieces of the Oppo Enco X2 are similar to those of the Apple AirPods Pro, especially the contrast black accents around the inner and outer microphones. Apart from this, like AirPods Pro, the controls have been partially given Force Touch. Even the stems of the earpieces are almost the same length.

There are also some design elements in Oppo Enco X2 that make it a separate identity of its own. The ‘L’ and ‘R’ markings on the earpiece are similar to the cutout casing on the Oppo Enco Air 2 Pro, which houses the internal microphones in the gaps. There is no Oppo logo on the earpiece. One of the highlights of the headset is the Dynaudio badge along with the logo on the charging case.

Force Touch controls have been given in the earpiece of Oppo Enco X2, which I found more accurate than Enco X. These can also be customized with the help of the app. The fit of the earbuds is quite comfortable and with noise isolation, they can be heard for a long time. In India, the headset comes in two colors – White and Black. It has an IP54 rating for dust and water.

The charging case of Oppo Enco X2 is a bit wide but slim to keep in a pocket. USB Type C port is given in the bottom. The pairing button is found on the right side. Indicator lights are given at the bottom and under the lid. Qi wireless charging is also available in this but for this you have to keep the charging case from the front side which should have the Dynaudio logo on the top. It took me some time to learn to use it but overall it was not uncomfortable.

When it comes to features, the Oppo Enco X2 is quite impressive considering the price range. Apart from ANC and app support, it also has interesting features. Bone conduction technology has been used in this and voice pickup is available for the microphones. Using it as a recording microphone, Dolby Audio supports binaural recording as well as dual device connectivity. The sales package includes a charging cable and three pairs of silicone eartips, which are provided in different sizes for a customizable fit.

The Enco X2 Wireless Headset works with the HeyMelody app. The app is available with support for both the platforms, Android and iOS. When used with select devices from Oppo and OnePlus, the Enco X2 does not require any app as all the app-based settings are found within the Bluetooth settings.

Talking about myself, I used the app to connect with the iPhone. When used with the OnePlus 9 Pro, I was able to access basic settings on the Oppo Enco X2 via the phone. It contained all the settings that are found in the app. Rather I would say that the settings were given in a better way in the Bluetooth settings itself.

Talking about the functions, it gets three modes for intensity which include, ANC, Transparency Mode, Sound Customization, Dual Connection and Customization of Controls. The single function can be accessed with a single, double or triple squeeze on each earpiece. Apart from this, side gestures can also be used.

A setup can be created to control playback and volume, activate voice assistant, and toggle between ANC and transparency modes. All these things are possible through the earpiece. The headset comes with four equalizer presets, three of which are from Dynaudio. With their help, you can set the sonic signature as per your choice. I didn’t like the Dynaudio presets and preferred the Classic Enco X which got balanced and detailed sound.

The Oppo Enco X2 comes with a dual driver setup consisting of an 11mm dynamic driver and a 6nm magnetic driver in each earpiece. This is a fairly unique feature for true wireless headsets. The earphones have a frequency range of 20-40,000Hz. It uses Bluetooth 5.2 for connectivity. It supports SBC, AAC and LHDC Bluetooth codecs. During the review, I also found the headset updated to support LDAC Bluetooth codec, but when I used it on the OnePlus 9 Pro, it preferred the LHDC Bluetooth codec. It supports multipoint connectivity for up to two devices. It also has the support of Google Fast Pair.

Oppo Enco X2 has been launched in the mid-range segment, but you will be surprised that it can compete with OnePlus Buds Pro and Samsung Galaxy Buds 2. The Enco X2 seems to have gone a long way when it comes to sound quality. Much of the credit for this goes to its driver setup and advanced Bluetooth codec support, which is rarely seen in the 10,000 range. When I used it with the OnePlus 9 Pro and the LHDC Bluetooth codec, it performed similar to the sound I’d heard in the Sony WF-1000XM4 and Sennheiser Momentum True Wireless 3 headsets. Both these headsets come a lot more expensive than the Enco X2.

The sonic signature of the Oppo Enco X2 is balanced. The dual driver setup produces an audible split in the sound, and I felt it distinctly in the low-parts, which resulted in tight bass when listening to fast tracks like Velvetine’s The Great Divide. The base attack looks strong but doesn’t go too far to be unbearable. The frequency range is complete in mid and high. There was a slight lack of accuracy in punchy beats and highs. The fast electronica tracks allowed for further improvement in the upbeat vocals. I found similar results on vocal focused tracks like Calvin Harris’s Stay With Me. Halsey’s hook and Justin Timberlake’s energy hit the track. This sound experience was similar to flagship headsets.

The presence of two drivers in each earpiece means that the Oppo Enco X2 can work smoothly even with additional data thanks to the LHDC Bluetooth codec. The earphones also handled fast paced, cohesive tasks with ease.

Wherever You Go from The Avalanches in Oppo Enco X2 was very beautiful. These included punchy, refined and calculated reproductions. Active noise cancellation was also good in the headset for the price. Different ANC modes were also given for this but there was no significant difference between them and I kept it set at Max level.

Indoor got better ANC performance than outdoor. The sound of air conditioning or the hmm sound inside the office was blocking it well. It didn’t block out outdoor sounds as effectively. Yes, while listening to music while walking in the street, the difference was clearly visible.

Call quality and voice recording is quite good. It can capture clear audio. Connectivity was quite smooth up to 4 meters. Battery life was fine for me. With ANC, medium volume and LHDC Bluetooth codec turned on, each earphone was able to last up to 4 hours on a single charge. With the charging case, each earpiece adds 3 more cycles, bringing the total run time to 16 hours.

Oppo has created a new wave in the TWS segment and has set new dimensions. Enco X2 proves this effort of the company more firmly. In many ways this is an impressive wireless earphone headset. Its design, its performance, go way beyond price and it competes with flagship headsets, that too for half the price! Battery life will be said to be average, other than that you probably won’t be able to complain about it.

Some people want options in this price range from brands like Samsung and OnePlus, but the Oppo Enco X2 beats them here with its features and codec support. iPhone users won’t benefit much from codec support, but fine tuning and app support make up for it to some extent. If you are an Android user, then you cannot get a better option than Enco X2 in the range below 15 thousand rupees.