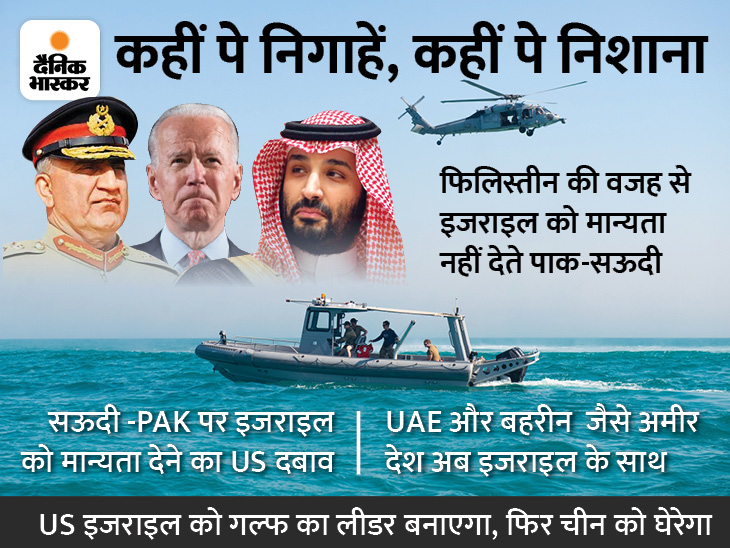 It has been more than 70 years since Israel became an independent country, but due to the Palestine dispute, many Muslim countries have not yet recognized it. Pakistan and Saudi Arabia are among the Islamic countries that have not yet recognized Israel to show solidarity with Palestine. Both countries do not leave the UN and go to any platform where Israel has a presence. However, now both these countries are doing navy exercises with Israel. If you look closely, it has very serious diplomatic and strategic implications.

what is the matter
The US Navy conducts a multinational navy exercise since 2012. This time also this navy drill is going on. In this, 9 thousand soldiers from 60 countries are participating. The exercise started on 31 January. The special thing is that it also includes Israel and its alleged enemies like Pakistan-Saudi Arabia. American and Israeli media have confirmed this.

On the other hand, Pakistan and Saudi Arabia have kept silence on this. An editorial on this International Maritime Exercise was also published in Pakistan’s newspaper ‘The Express Tribune’, but there is no mention of Israel anywhere in it.

understand its meaning
A few days ago, former Pakistan Army General Amjad Shoaib had said in a TV program – The world is changing and we cannot always have enmity with a country like Israel on the basis of religion. This is not an act of wisdom. Countries like Bahrain, UAE and Oman have recognized Israel. These countries are also getting tremendous benefit from this. Many people ask me questions about why you, that is, Pakistan, is behind.

One thing should be noted here that why Shoaib’s statement is important. Actually, the names of former officers who participated in TV programs or debates are decided by the Army Chief of Pakistan and the media wing there, DG ISPR. Therefore, this statement of Shoaib was not personal. It is believed that this statement was made only to see the reaction of the fundamentalists of the country about Israel. The game was double. Had there been a ruckus, it would have been described as Shoaib’s personal statement. Now since no displeasure has been expressed, it is believed that the thinking of the people of Pakistan about Israel is changing.

reaction check or something
It started with the participation of Pakistan and Saudi with Israel in a multinational military exercise. This work has also happened for the first time. So far there has been no protest in this matter anywhere in Pakistan and Saudi Arabia. It is obvious that America will bring these countries closer by adopting some other methods in the future.

This work started with the ‘Abraham Accord’ during Donald Trump’s era and then five Gulf countries recognized Israel. These included Bahrain and the UAE. Now Joe Biden is also following the path of Donald Trump. Imran himself had said last year – there is pressure on me to confess to Israel, but my soul does not allow it.

The Saudi Crown Prince came to Pakistan two years ago. Then Imran was present in the driving seat.

What is cooking and what is possible next
America has always taken the responsibility of protecting the Gulf States, that is, the Gulf countries. The views of Israel and the US have remained the same on almost every matter. America faces challenges from Russia and China. China is also trying to spread its foot in the Gulf. America and China are face to face on many fronts.

America wants the Muslim countries to end their opposition to Israel and form a new alliance under its leadership. For this, he is using every trick silently. This navy exercise is also a part of this plan.

It is possible that very soon there will be diplomatic relations between Israel and Saudi Arabia. Last year a high-level Israeli delegation quietly reached the newly built city of Neon near Riyadh. This has been confirmed by the flight data tracker. It is said that the then President of Israel Benjamin Netanyahu was also on that special flight. That is, a lot is cooking, going on under the backdoor diplomacy. As far as Pakistan is concerned, it does not matter to Israel, because Pakistan will do what it calls Saudi Arabia, the lender.