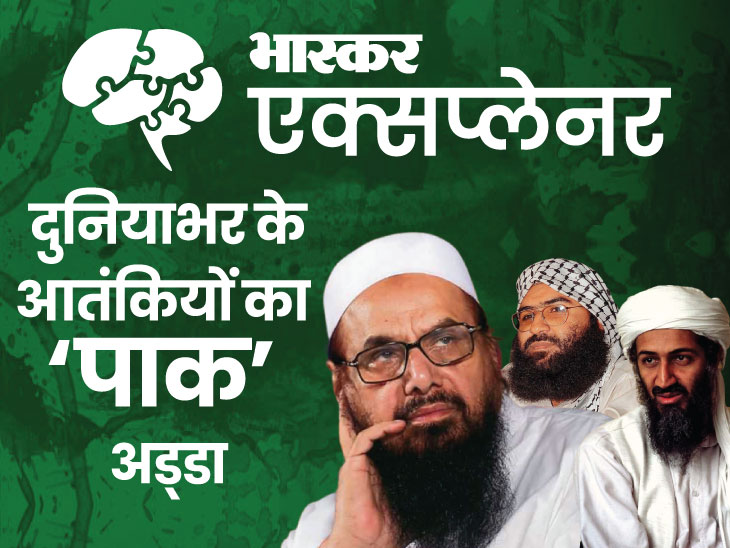 US President Joe Biden on October 15 called Pakistan the most dangerous country in the world. If seen, Pakistan is the 5th largest populated country in the world. He has the 5th largest military. number six in terms of nuclear weapons; But Pakistan’s poor economic condition, political instability and rapidly growing population due to lack of education and jobs, as well as undeclared control of power by the army makes Pakistan the most dangerous country.

Today in Bhaskar Explainer, we will tell those 7 reasons why Pakistan is the most dangerous country in the world.

Reason-1: Pakistan acquired nuclear technology by stealth and sold it to dangerous countries

It’s 1971. Pakistan had to lose its eastern part i.e. today’s Bangladesh with a humiliating defeat. On the other hand, India was testing Nuclear Explosive Device on its own in May 1974.

On September 17, 1974, Abdul Qadir Khan, who is called the father of nuclear weapons of Pakistan, writes a letter to the then Prime Minister Zulfikar Ali Bhutto. He offers them to build an atomic bomb. Khan was then working at the Physical Dynamics Research Laboratory in the Netherlands.

In December 1974, Bhutto meets Khan and asks him to do more to build a nuclear bomb for Pakistan. The next year i.e. in 1975, Khan steals the drawing of the centrifuge from the laboratory for which he was working, along with the design, from where the equipment is available for it.

Abdul Qadir Khan escapes from the Netherlands on 15 December 1975 after stealing. After this, with the help of Khan, Pakistan becomes a nuclear power in the year 1998. That is, the beginning of making Pakistan’s nuclear weapon started with theft.

After making Pakistan a nuclear power, Khan began selling centrifuges, components and designs through the black market in Dubai, Malaysia and elsewhere in the mid-1980s. Khan’s customers included Iran, which built a uranium-enrichment complex based on the Pakistani model.

Abdul Qadir Khan also visits North Korea at least 13 times. Khan is also believed to have provided nuclear technology to the North through his black market. Also, with the help of North Korean people in his laboratory, Khan made the Ghori ballistic missile for Pakistan.

Khan did not stop here. They also sold nuclear technology to Libya, after which Libya began its nuclear weapons program, but in 2003 the US forcibly stopped it.

Abdul Qadir publicly admitted in 2004 that he had provided nuclear technology and materials to many countries of the world. He also admitted to supplying the necessary materials and designs to Iran, North Korea and Libya to build nuclear weapons.

Abdul Qadir Khan was arrested by the Pakistani government on 31 January 2004 in connection with the transfer of nuclear technology to Iran and North Korea. However, on 5 February 2004, the then President Pervez Musharraf pardoned him.

Also there is political instability in Pakistan. Because of this, nuclear weapons can fall in the hands of terrorists living in Pakistan. Pakistan is a country that does nuclear blackmail. Pakistan has sold nuclear technology from Syria, Iran, Iraq, Libya to North Korea for money. In such a situation, Pakistan can really prove to be the most dangerous country for the world.

Reason-2 : Democracy is negligible, most of the time the rule of military dictators

Since the formation of Pakistan in 1947, till now Pakistan has been ruled by military dictators for more than 3 decades. During this, 4 military governments were formed in Pakistan and the control of power was with General Ayub Khan, General Yahya Khan, General Zia-ul-Haq and General Pervez Musharraf.

To be seen, since the first coup in Pakistan, the same common reaction has been heard every time. In which the claim of incompetence, corruption and threat to the country is shown at the top of the elected civilian government. Defense experts say that the Pakistan Army wants governments to be run on its advice in all matters.

This is the reason that in 75 years 31 Prime Ministers became in Pakistan, but not a single PM could complete the tenure of 5 years. Experts say that the long military rule in Pakistan has given the army an opportunity to infiltrate the entire system of government. Political parties, judiciary, bureaucracy and media – today there are supporters of the army in all sections. Therefore, there is no longer a need for any kind of military revolt to oust a democratically elected political leader who is at odds with the military.

In 2013, when elections were held for the first time in Pakistan’s 70-year history after five years of civilian rule, many people felt that democracy had arrived in Pakistan, but Prime Minister Nawaz Sharif was disqualified by the Supreme Court on 28 July 2017. The ordination is a direct reminder that Pakistan is still being run by a ‘virtual government’ i.e. deep state and that there may be other ways than military rebellion to overthrow the government.

PK Sehgal says that the Radicalize officers who were under Mursharif have become Brigadiers and Generals in the Army today. He has Tactical Nuclear Weapon in his hand. In such a situation, they can sell Brigadier and General Tactical Nuclear Weapons to terrorists and leave the country. At the same time, there is constant political instability in Pakistan. In such a situation, it is clearly visible that Pakistan remains the most dangerous country in the world. Anything can happen here at any time.

Pakistan’s attempt to annex Kashmir in 1947 failed completely. In this war, due to the failure of Pakistani Army, Air Force, Navy, Intelligence Bureau and Military Intelligence, the need for an intelligence agency was necessitated. In 1948, British Army officer Major General William Cawthorne formed the ISI.

If seen, ISI is known more as an agency of terror than as an intelligence agency. America has a big hand in this too. In the 80s, when the US spy agency CIA started preparing the Mujahideen in Afghanistan to drive out the Soviet Union’s forces there, the ISI helped it the most in this work. That is, from here he took training to prepare terrorists.

These fighters later got organized and came in front of the world in the form of Taliban. ISI has always denied these allegations. In 2011, when infamous terrorist Osama bin Laden was killed in Abbottabad, Pakistan, questions were raised about the dual role of the ISI. American agencies had said that the ISI had full knowledge of bin Laden’s presence in Pakistan, but it was hidden.

Even the US, which once promoted ISI, called ISI a terrorist organization in a leaked document in 2011. In June 2010, the London School of Economics quoted Taliban field commanders as saying that ISI agents used to attend the Taliban’s Supreme Council meetings.

Dawood Ibrahim, the main accused in the 1993 Mumbai serial blasts, also has protection from the ISI in Pakistan. Dawood’s name is included in Interpol’s most wanted list. He is facing charges of fraud, criminal conspiracy and operating a criminal gang. The US declared it a global terrorist in 2003.

ISI has a big role in spreading proxy war and terrorism in India. From training to terrorists, ISI plays an important role in providing weapons and money. After fully training these fighters, the ISI hands them over to the Pakistani Army. The Pakistani army uses them against India on the LAC. ISI has also created terrorist groups like Jaish-e-Mohammed and Lashkar-e-Taiba.

Reason-4: FATF kept in gray list for not taking action against terrorism

In May 2019, the United Nations Security Council banned the terrorist organization Jaish-e-Mohammed and declared its leader Masood Azhar as an international terrorist. At that time information came out that Pakistan is the third country with the most banned people in the whole world.

The UN has banned a total of 146 citizens of Pakistan. This is the highest number after Iraq and Afghanistan. The UN had given complete details of the people who were banned. It also included the names of 26/11 mastermind Hafiz Saeed, Lashkar-e-Taiba’s Zaki ur Rehman Lakhvi and Haqqani. Underworld kingpin Dawood’s name is also in this list. During his visit to America in 2019, he had admitted to the Prime Minister of Pakistan Imran Khan that there are 30 to 40 thousand terrorists in his country. He had said that 40 terrorist organizations have been active in Pakistan.

Defense expert PK Sehgal says that Pakistan has supported many of the terrorists who have been banned by the UN. To avoid FATF, these terrorists are put in jail from time to time, but in jail also they get all kinds of facilities. Today Pakistan is under threat from its own reared terrorists. They are threatened by the Taliban. There is a threat from Tehreek-e-Taliban. They were raised by Pakistan and now these terrorist organizations have also become a threat to them.

In 2008, Pakistan was put on the gray list of the FATF for the first time because of not taking action against terrorism. Under this, he had to take action on terror funding and money laundering. In 2009, he was dropped from this list.

In 2012, Pakistan was once again put in the gray list of FATF. However, in 2015 again he managed to get out. Pakistan joined the FATF gray list in June 2018. Pakistan was also not relieved in the review held in October 2018, 2019, 2020 and 2021 and 2022. Pakistan has failed to act on the recommendations of the FATF during this period. During this, terrorist organizations in Pakistan continue to get financial help from abroad and domestically.

Reason 5: All neighbors are unhappy with Pakistan except India

Every day in India, Pakistanis are engaged in destroying our economy through fake currency. Keeps trying to ruin Indian youth through drugs. Wants to do damage to life and property by sending weapons with the help of drones.

In Bangladesh, the day-to-day protests against the government are supported by Pakistan. Wherever terrorist activities are taking place in the world, direct and indirect connection of Pakistan is found.

Reason-6: In the name of terrorism, 86 thousand crore rupees were taken from America in 13 years.

From time to time, Pakistan’s army has been taking funds from other countries in the name of ending terrorism. The world changed a lot since the September 11, 2001, terrorist attacks on the World Trade Center in New York. At the same time, the ice on the relationship between Pakistan and America also melted. Pakistan became America’s largest ally in the war on terrorism.

Reason 7 : Every year more than 1000 Hindu and Christian girls are kidnapped

According to the human rights organization Movement for Solidarity and Peace (MSP), more than 1000 Christian and Hindu women or girls are abducted in Pakistan every year. After this, they are converted and married according to Islamic customs.

Most of the victims are between 12 and 25 years of age. The human rights body also said that the figure could be higher, as most cases are not registered by the police. Most of the girls who are kidnapped belong to the poor section. Those who do not have any news-takers.

The Sindh province of Pakistan is infamous for its atrocities on minorities. From this province, there are reports of most Hindu and Christian girls in Pakistan getting married by forcibly converting to religion.

India can carry out nuclear attack from underwater: many important cities of China-Pakistan in the range; Only 6 countries have this technology

America is searching for Russian weapons around the world: will supply to Ukraine, what is Biden’s new war strategy

Putin furious as soon as the bridge was broken: for 8 years the occupation of Crimea was the life-line