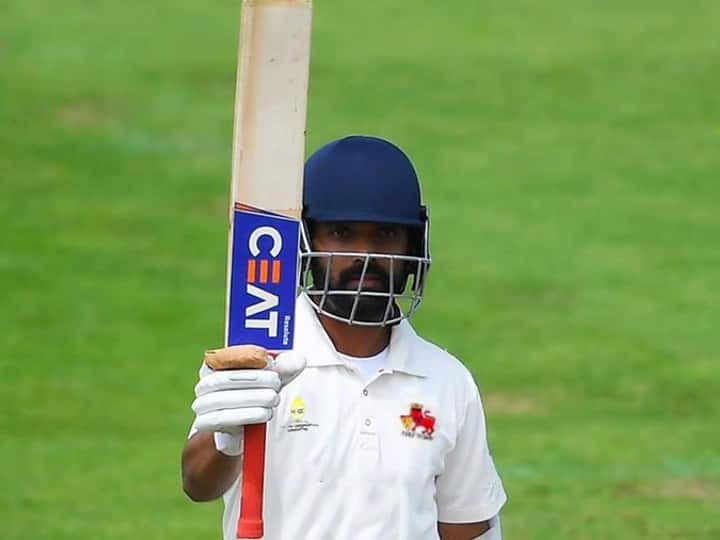 Ajinkya Rahane Century: After a flop performance in Test cricket for the last two years, Ajinkya Rahane’s bat finally spewed runs. Rahane has scored a brilliant century while playing for Mumbai. He not only scored a century in this match but also supported his team which had lost 3 wickets for 44 runs. Thanks to this century, Mumbai’s team scored 263 runs at the loss of 3 wickets on the first day of the Ranji match.

Strong innings from Rahane
Mumbai’s first match in Ranji Trophy is against Saurashtra. Mumbai captain Prithvi Shaw won the toss and elected to bat first. The bowlers of Saurashtra sent Mumbai’s top order to the pavilion for 44 runs. From here Ajinkya Rahane took the crease and made a century partnership with Sarfaraz Khan for the fourth wicket. His innings pulled the team out of difficult situations. Rahane completed his 100 runs in 212 balls. During this he also hit 14 fours and 2 sixes. At the end of the first day’s play, he returned unbeaten on 108 runs.

Rahane has been a flop in the last 2 years
Rahane, standing close to scoring 5000 runs in International Test cricket, was not able to play big innings for a long time. In the last 19 Test matches, he has been able to score 819 runs at an average of just 24. He hasn’t even scored a century in the last one and a half years. He was a complete failure even on the South Africa tour. It was believed that if he could not even walk in the Ranji Trophy, then perhaps he could have a permanent leave from international cricket. For the time being, after this wonderful innings, he has put an end to these speculations.

Rajasthan Royals: Royals version of the song ‘Om Shanti Om’ going viral, will not be able to stop laughing watching the video

IPL Auction 2022: Australia’s fast bowler made a big deal about not being sold in IPL, told why this happened