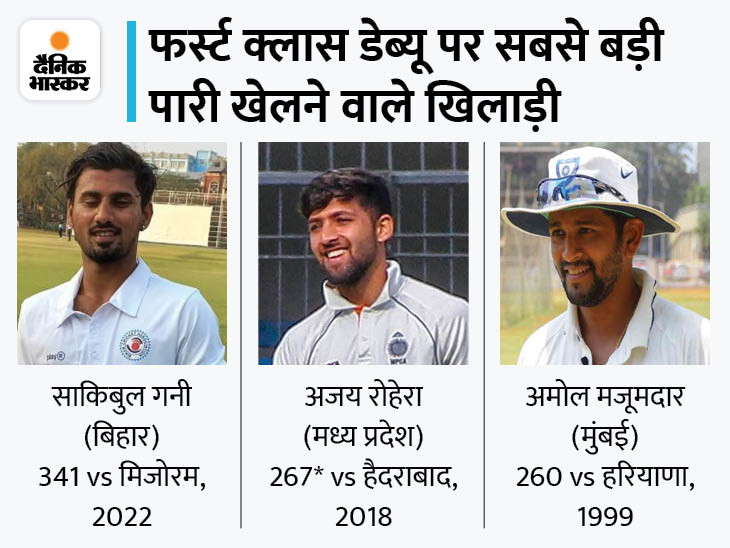 The biggest tournament of domestic cricket, the Ranji Trophy, has started from Wednesday. On the second day of Ranji Trophy, the names of the young players remained. While Bihar’s young player Sakibul Ghani made a world record by scoring a triple century in his debut first-class match, Mumbai’s Sarfaraz Khan also played a powerful innings of 275 runs.

Ghani made world record
In the match being played between Bihar and Mizoram, 22-year-old young batsman Sakibul Ghani of Bihar has created history. Sakibul has become the first player in the world to score a triple century in his first-class debut. He scored 341 runs in 405 balls against Mizoram. He also hit 56 fours and 2 sixes during this historic innings. Apart from him, Babul Kumar scored an unbeaten 229 runs.

Bihar declared the first innings at 686/5. Iqbal Abdullah took 2 wickets for Mizoram. At the end of the day’s play, Mizoram are 40/3. The team is still 646 runs behind Bihar. Click here to read full news

Sarfaraz Khan misses triple century
Mumbai’s middle order batsman Sarfaraz Khan has played a blazing innings against Saurashtra. He scored 275 runs in 401 balls with the help of 30 fours and 7 sixes. Sarfaraz has scored his second double century in the last 9 innings. Mumbai lost 3 wickets for just 44 runs. After this Ajinkya Rahane and Sarfaraz Ahmed took over Mumbai. There was a partnership of 252 runs between Rahane and Sarfaraz. Mumbai declared the first innings at a score of 544/7. Chirag Gani and Dharmsinh Jadeja took 2-2 wickets for Saurashtra.

Rahane also returned to form and scored 129 runs. This century is very special for Mumbai’s Rahane, who has been out of form for a long time. A 2-match Test series is to be played against Sri Lanka from next month and the suspense remains on Rahane’s selection for this series. In such a situation, he has presented his strong claim before the announcement of the team.

Recently, BCCI President Sourav Ganguly had also advised Rahane and Pujara to play in Ranji in a statement. Ganguly had said- Yes, he is a very good player. Hopefully, he will go back to Ranji Trophy and score a lot of runs, which I am sure he will do. Ranji Trophy is a huge tournament and we all have played this tournament.

Delhi vs Tamil Nadu
In another match being played between Delhi and Tamil Nadu, Delhi were all out for 452 in their first innings. U-19 captain Yash Dhul, making his first-class debut, scored 113 runs against Tamil Nadu. Apart from him, Lalit Yadav also played a strong innings of 177 runs. M. Mohammed took 4 wickets for Tamil Nadu.

Maharashtra scored 415 runs in the first innings. For Assam, Mukhtar Hasan took 5 wickets. By the end of the second day’s play, Assam’s score was 81/2. The team is currently 334 runs behind Maharashtra. For Assam, Shubham Mandal is unbeaten on 34 and Riyan Parag on 26.

Madhya Pradesh vs Gujarat
In another Group A match, on the first day, Madhya Pradesh scored 274 runs in the first innings against Gujarat. Shubham Sharma (92) and Rajat Patidar scored 54 runs. Arjan Nagaswala took 5 wickets for Gujarat. Arjan is a left arm fast bowler. He has been the net bowler of Team India for a long time. By the end of the second day’s play, Gujarat’s score was 244/6. Het Patel (72) was the top scorer, while Manpreet Juneja scored 53 and captain Priyank Panchal scored 52 runs.

Rajasthan vs Andhra Pradesh
Ranji did not have a good start this season for Rajasthan. The team was bundled out for 275 in the first innings. Rajesh Bishnoi (54) scored the highest runs. Stephen took 5 wickets for Andhra. Andhra’s team also could not show anything special in the first innings and were bundled out for 274. Upper Girinath scored the highest 71 runs. Aniket Chaudhary got 4 wickets for Rajasthan. By the end of the second day’s play, Rajasthan have made a score of 97/2 in the second innings. Mahipal Lomror is unbeaten on 45. Rajasthan have taken a lead of 148 runs in the match.