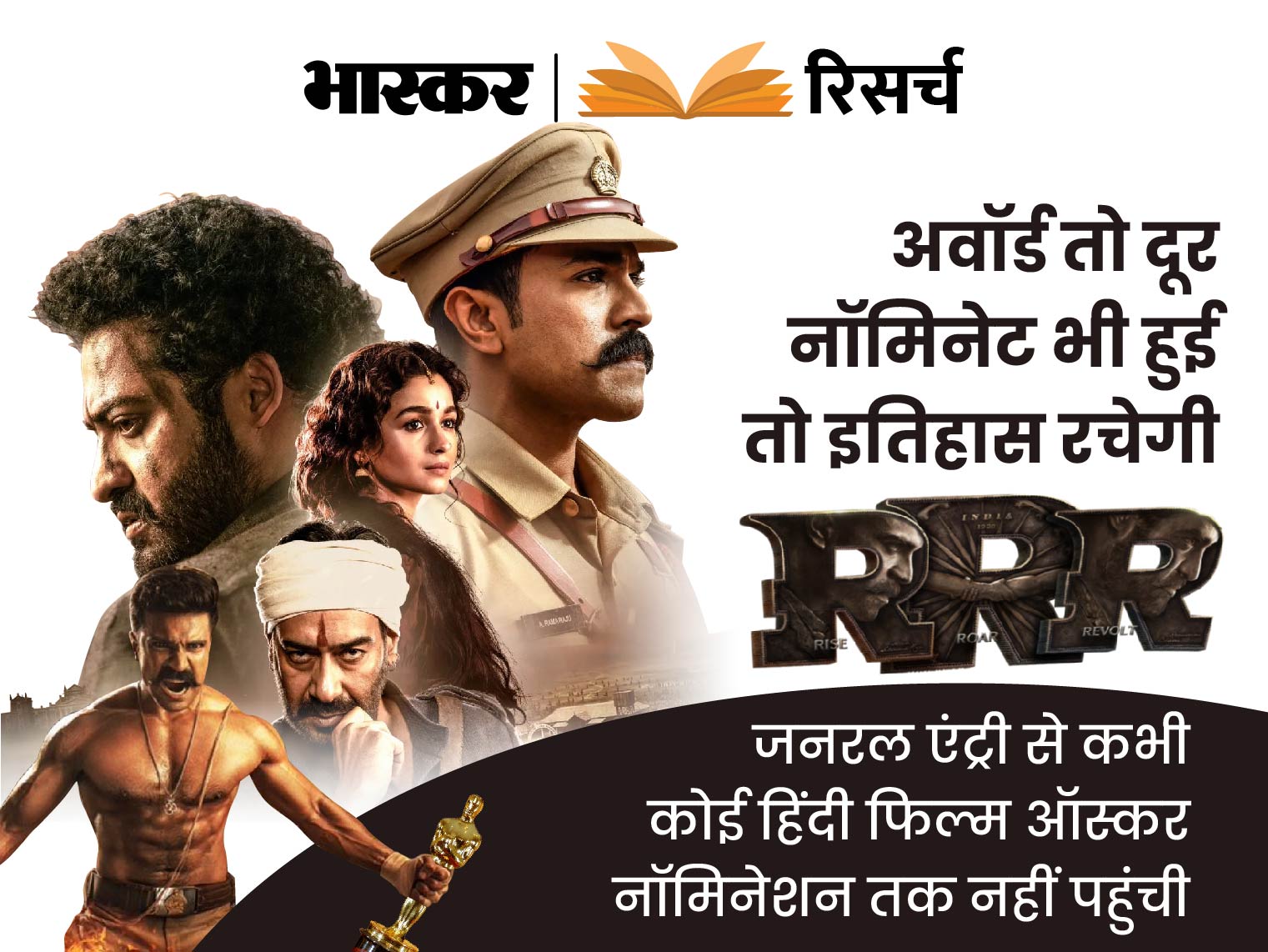 Who will get the Oscar, which is considered to be the most prestigious award of the film world, it will be decided in March, 2023. But the noise of this race will be more in India this time.

Reason…After not being able to become the official entry of India, now S.S. Rajamouli’s ‘RRR’ is in the race for nomination on its own.

The direct answer lies in the cost of such campaigns. The campaign for the film to become an official entry is done at the expense of the Film Federation of India. For this, the Government of India has also created a corpus fund. India’s official entry is promoted from this fund.

In direct entry, the campaign expenses are borne by the company making the film. This difference is of crores of rupees. If the producers of the film becoming an official entry want, they can also promote at their level to give impetus to the campaign. Aamir Khan and Ashutosh Gowariker did this for ‘Lagaan’.

The Oscar campaign of ‘RRR’ also has a global impact. Actually, the debate on the criteria for Oscar nomination is not limited to Indian entry only. It is very rare in the history of the Oscars that the biggest commercial box office hit of that year has won the Best Film Award.

The Academy of Motion Picture Arts and Sciences, which currently awards the Oscars, has started the process of selecting films. By November 15, films from all over the world can send their entries for the award. The final nominations will be announced in January 2023. In March, it will be revealed who got the award.

That is, it is certain that the debate among Indian cinema lovers will continue in the next 6 months. If you want to understand this debate better, then know, what is the process and cost of reaching the final nominations of the Oscars…

Why the controversy over India’s official entry

India’s official entry to the Oscars is not a new thing to get into controversy. Last time too, questions were raised on making the Tamil film ‘Koojahangal’ an entry for the Oscars as to why the film was sent instead of ‘Shershah’ and ‘Sardar Udham Singh’.

These controversies are not limited to any non-Hindi film. A similar controversy arose when Vidhu Vinod Chopra’s ‘Eklavya’ and Anurag Basu’s ‘Barfi’ were made official entries.

The Film Federation of India says that while selecting a film for official entry, the jury considers several factors including its story, craftsmanship, the art of making a film.

The root of this controversy is not in India, but in America, at Oscar’s house.

In fact, the jury members of the Academy of Motion Picture Arts and Sciences observe similar rules in nominating films for the Oscar Award.

In 2020, 9527 jury members voted in choosing the films for the Oscars. After the final nomination of the film, voting is done by only active and life time members.

Films that receive major awards such as Best Film, Best Director or Best Screenplay each year are not necessarily the highest-grossing or most popular films of that year.

For example, ‘Avengers Endgame’ was the biggest blockbuster film in 2019, but ‘Green Book’ got the Oscar for Best Film.

But hit Hollywood movies don’t disappear from Oscars every time.

In 2020, director Christopher Nolan’s film ‘Tenet’ was the highest-grossing film of that year. It didn’t win the Oscar for Best Film, but won the Best Visual Effects award.

It’s also not like the Oscar jury rejects box office hits. There are many films like ‘The Godfather’ in 1972, ‘Titanic’ in 1997 and ‘Lord of the Rings’ in 2003 which have done well at both the box office and Oscar awards.

‘Spiderman: No Way Home’ was also nominated in the category of Best Visual Effects, but did not win the award.

Then why don’t our hits go to the Oscars?

All these films nominated for the Oscar Award enter only through the general category. In this way, those Hindi films can also go in the race for Oscars, which do not become India’s official entry. But this happens very rarely. The main reason for this is that the cost of campaigning for the Oscars is not low.

For the campaign, the entire team of the film camps in America for about 6 months. It is also important to choose the right publicity firm that will promote the film in the right circles of Hollywood. Along with the screenings and receptions of the film, such promotional events have to be planned which are within the scope of the rules of the Oscars.

All this work is very expensive. Since there are films from all over the world in competition, most production companies do not want to spend that much because of the low chance of getting an award.

Previous yuzvendra chahal revealed ravindra jadeja lack fulfill by axar patel in t20 world cup 2022 all rounder| Yuzvendra Chahal: This deadly all-rounder will fill Jadeja’s lack in T20 World Cup, Chahal revealed
Next The Russian connection to the growing distance between Saudi Arabia and the US