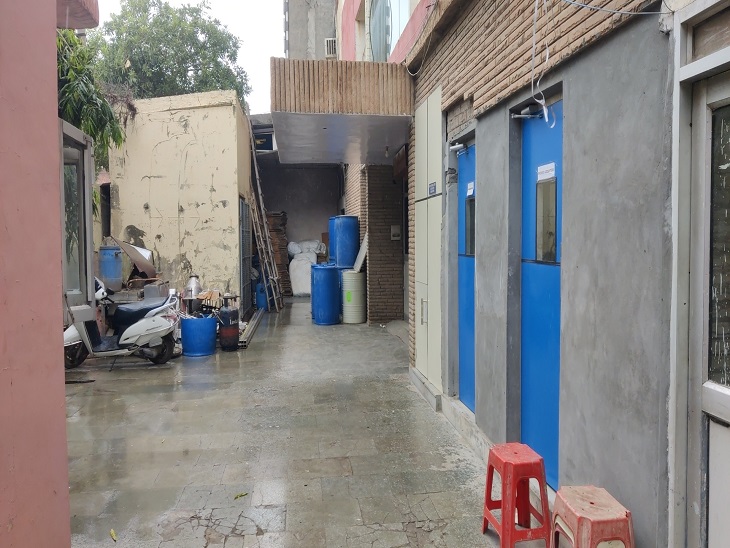 Running for 20 years in Sector 25; A pile of vials, broken glass and injections on the road. Gambia Cough Syrup Case Updates; Meden Company Plant In Panipat

Inside the company was deserted.

The connection of the deadly cough syrup company that caused the death of 66 children in The Gambia is linked to India. The network of this syrup company in India is spread in Solan in Himachal Pradesh apart from Sonipat and Panipat districts of Haryana.

A large quantity of syrup is made here and not only in the country but also supplied abroad. 66 children have died in the country of Gambia after drinking syrup from the same company. After connecting the Panipat connection in the matter, the Dainik Bhaskar team reached the syrup plant located in Sector 25 Industrial Area of ​​the city.

Where I saw that the doors of the company were closed. The two watchmen sitting in the room at the gate said that there was no one inside. He told that a team had come here on Friday, which has taken away a lot of records from here. Since then the work has stopped here.

The company’s closed gate, two watchmen sitting in a nearby room.

Not only inside but also outside there was gross negligence

A unit of Medan Pharmaceuticals Company is running under another name Panipat. Here this company is operated under the name Intact Drugs and Pharmacolytics. After its disclosure, this plant built in Sector 25 of Panipat was also investigated.

At the same time, the company’s director Vivek Goyal has also been questioned in this matter. There are suspicious flaws in the syrup being made in the company, but many flaws were found outside as well. This company is operating here for the last 20 years.

Maiden Company’s syrup bottles lying in the open outside the company.

The wastage left after making syrup here was found openly outside the company, injection refilled syringe vials, bottles filled with syrup of Maiden company, besides injections, broken glass in large quantities. There was a pile of these wastes here. Due to which the environment is also being harmed and there is a constant fear of spreading disease in the open.

Watchman sitting inside the company, no one was found responsible

Two watchmen were sitting in a room at the company’s gate. The watchmen have also been taught in such a way that they were not ready to open their mouths in any way. Asked him many questions, but he always gave only one answer that he has been newly appointed here.

They don’t know anything about here. Who is the owner, who is the supervisor here, who works here, the watchmen were seen avoiding all these questions. However, he was repeatedly talking about the existence of an employee who had worked within the company for more than 10 years. Those who were somehow called to the gate outside, they ran back inside as soon as they came to know that the media was standing outside.

Glasses of medicine bottles lying in the open on the road outside.

Even after the detection of the deadly cough syrup company’s plant located in Sector 25, Panipat, no administrative action was seen here. However, on Friday, the team had visited here along with the local police.

Despite this, no notice of any kind has been pasted outside the company. The ongoing work has also not been stopped. The local administration is not serious about this. On the other hand, there is information that soon the central teams will also visit this plant.

A joint team of the Drug Controller General of India (DCGI) and the Food and Drug Administration (FDA) is continuously monitoring the matter. A notice has also been sent to the director and co-director of the company on behalf of the Government of Gambia in this matter and a reply has been sought. The government has also sent 5 samples from this company’s plant to the Central Laboratory in Kolkata for testing.

Central teams are continuously investigating in this matter, while the officials of the State Drug Controller are keeping silent. He says that until the report of sample samples is not received, no action can be taken against the company. However, Haryana Minister of State Anil Vij himself is keeping an eye on the matter. He says that the investigation is going on, soon the curtain will come out of the matter.

Waste related to medicines piled up outside the road.

Supply of cough syrup to these countries

Instructions for withdrawal of imported products from the company

At the same time, the Government of Gambia has also sent a notice to the company in this matter. Central teams have pasted this notice outside the plant. The notice issued by the Medicines Control Agency (MCA) of The Gambia has directed the withdrawal of contaminated, substandard and counterfeit medicinal products imported from Maiden Pharmaceuticals Ltd. These include many medicines like syrups, tablets, capsules, injections etc.