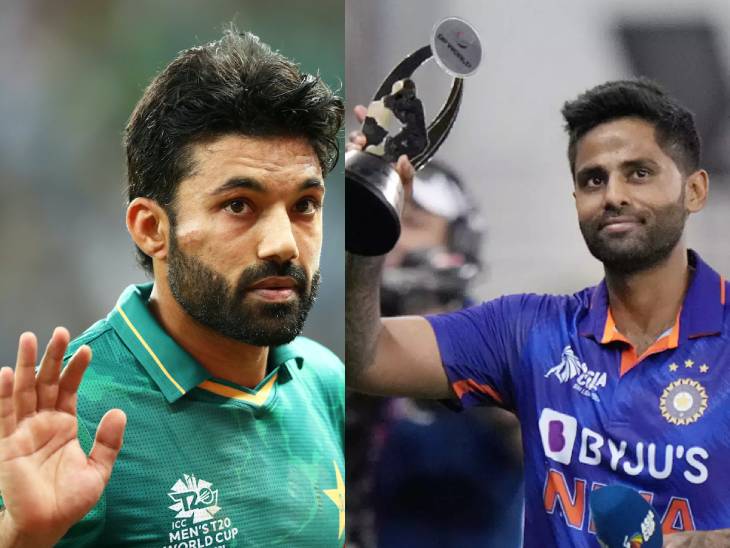 On Wednesday, the International Cricket Council (ICC) released the T20 World Rankings on Wednesday. In the batting rankings, the Indian batsmen lagged behind Pakistani batsman Mohammad Rizwan by a margin of just a few points and had to settle for the second position in the rankings. Mohammad Rizwan and Suryakumar Yadav had a difference of 16 points. Similarly, where Rizwan had 854 marks, Surya scored 838 marks. There is a tough fight between the two for the number 1 spot in the T20 world rankings. There is often a comparison between the two batsmen.

Recently, Mohammad Rizwan was asked his opinion on this matter. Actually, Pakistan won the Pakistan-Bangladesh match in the ongoing Pakistan-Bangladesh-New Zealand tri-series in New Zealand. Rizwan played a smoky innings of 78 runs in 50 balls in this match. In the press conference after the victory, Rizwan was questioned about the comparison between him and Suriya.

While Rizwan praised Suriya in response, he also told the difference between the two. He said, ‘Suryakumar Yadav is a good player. I like the way he plays. But as far as the comparison of both is concerned, there is a difference in the game of both the players. I am an opener and he plays in the middle order.

On being consistently ranked No. 1 in the rankings, Rizwan says, “Never thought of becoming No. 1 in the rankings. I am trying to fulfill the needs of the Pakistan team. Things like No. 1 ranking and man of the match take the player away like negativity but I don’t think about all that.

The Pakistani team is performing well in this T20 series in New Zealand. Rizwan’s long innings played an important role in helping the team win against Bangladesh.

Only 6 runs scored in the last match against South Africa

If Suryakumar had batted well in the third T20 match against South Africa, he could have left Rizwan behind. In the last T20 played in Indore, he scored 8 runs off 6 balls. On the other hand, if we talk about the overall series, then Surya has scored 119 runs in 3 matches at an average of 59.50. It also includes two half-centuries. His strike rate stood at 195.08.

Previous Apple iPhone SE 4th generation will have 6.1-inch LCD screen, launch date leaked with features!
Next Rekha beautiful looks in silk saree with red lips on her Birthday | Everyone’s eyes are on Rekha’s ethnic look, she is a fashion icon for silk sarees