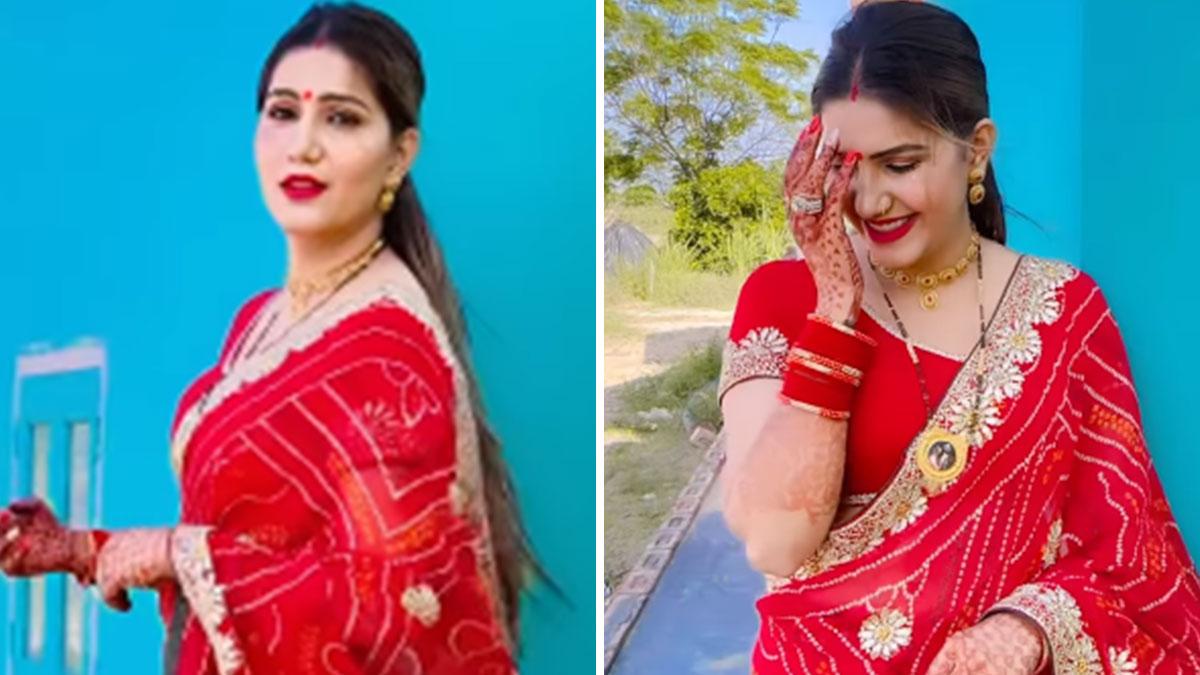 Haryana’s Aan, Baan and Shaan, Sapna Choudhary compels fans to dance on her every song. The dancers are celebrating Karva Chauth today. Red Bandhani Saree, Heavy Jewellery, Red Lipstick, Red Mojadi, Deep Neck Blouse, Red Bindi, Open Hair, Nude Makeup, Everything seems to add to the look of Sapna Chaudhary. Sapna Chaudhary is seen getting the video made at a house on the edge of the village. A romantic song is playing in the background.

Sapna’s video viral
It is worth noting that the mehendi of Veer Sahu’s name was put on the hands of Sapna Chaudhary. Sapna Choudhary is wearing a red bangle in her wrist. The eyes of the fans have fallen on Sapna Chaudhary’s mangalsutra. On which the wedding photo of both Sapna and Veer is attached. There is a design all around. Fans are praising the photo on Mangalsutra along with the congratulations of Karva Chauth to Sapna Chaudhary. While posting the video, Sapna Choudhary wrote in the caption, “The smile on our face is amazing on our side too, when our ‘bindi’ is also red on a red sari.” Sapna is also seen blushing at the end of the video.

Sapna Chaudhary is known for making everyone’s heart happy with her style and dance moves. Sapna has given dance performances at different places across the country. In addition, she also appears in music videos. Now Sapna’s new song has come, whose name is ‘Mast Malang’. Dancer Sapna Chaudhary remains in the headlines for her dance as well as controversies. In the month of September, Sapna was taken into custody by a Lucknow court in a case. In October 2018, Sapna Choudhary had a program in Lucknow’s Smriti Upvan. People had bought tickets for 300 rupees offline and online to watch the program, but Sapna did not reach that program. After this people created a ruckus. After the uproar, the matter reached the court.

Sapna Chaudhary started her career as a stage dancer. She used to dance in live shows to entertain people. After this he started working in music videos of Haryanvi songs. His music video ‘Solid Body Ray’ became very famous. He gained popularity from this song. Today Sapna has released many songs. He also worked in a music video with Bhojpuri actor and singer Khesari Lal Yadav some time ago.

Previous Despite being in Team India, this player will not play a single match in the T20 World Cup! The reason will surprise Hindi News
Next New legend Ash coming in the new season of Apex Legends Mobile, know its specialty