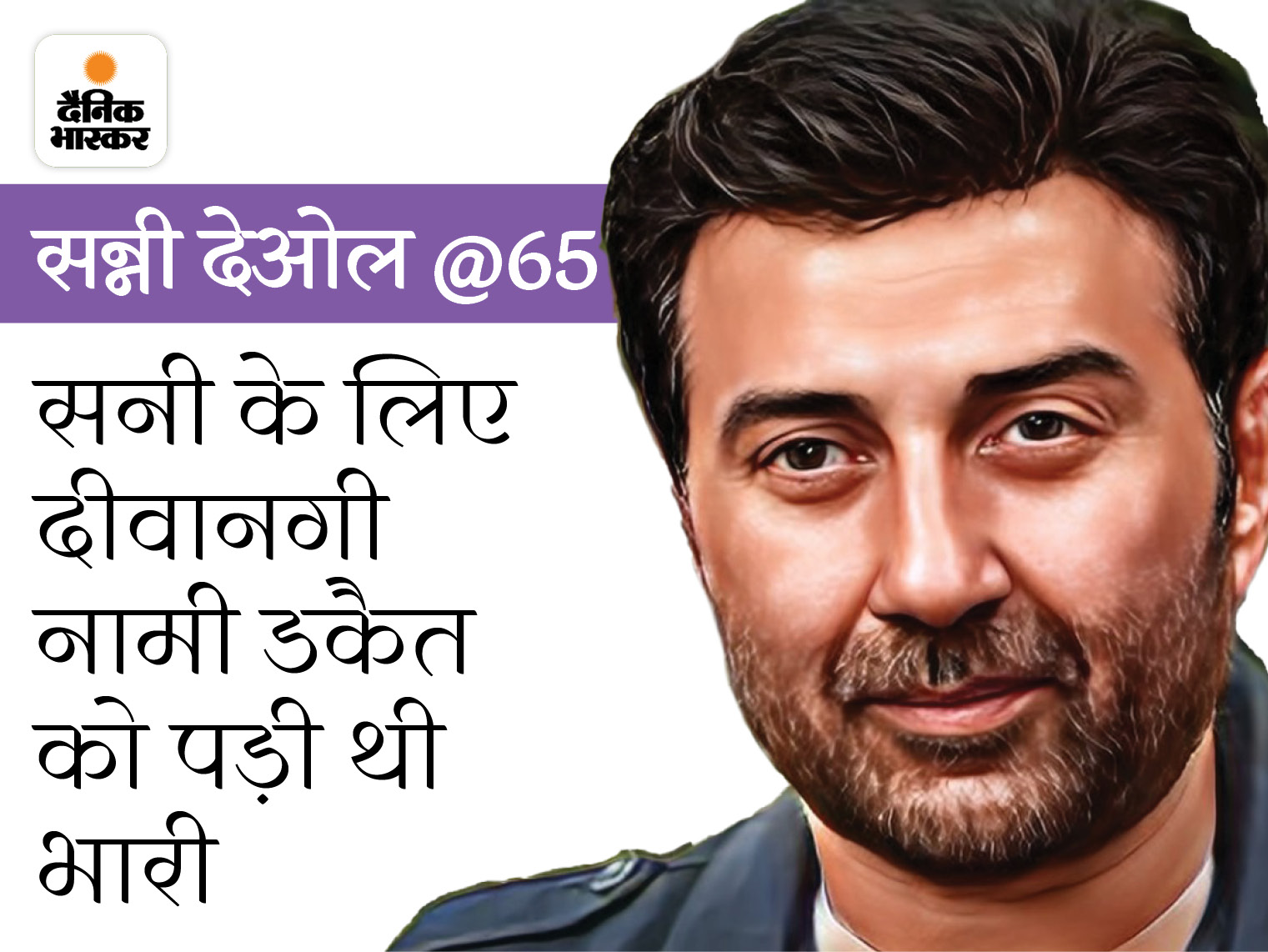 Today is the 65th birthday of action star Sunny Deol. Known for strong action sequences and heavy dialogues, Sunny is currently playing the role of both a politician and an actor. Sunny’s fame was among the people in the 90s. Sunny, who has worked in about 100 films, wanted to become a successful actor like his father superstar Dharmendra since childhood and his father also wanted the same.

He studied acting in England and then made his acting debut with the film Betaab. At the time of the first film, Sunny also had to get married secretly. At that time all the action heroes were in the industry but it was difficult to compete with Sunny. While Sunny became the messiah for actors like Salman, there was such a rift with Shahrukh and Anil that they stopped working in films together.

As much as action is seen in Sunny’s films, the same action sequence stories are also there in Sunny’s personal life.

went to England to study acting

On October 19, 1965, the eldest son was born to Dharmendra and Prakash Kaur. Name was Ajay Singh Deol. Then later people started calling him Sunny. This name became so famous that Ajay Singh Deol became Sunny Deol.

Born to the superstar’s house, Sunny was very shy since childhood. He didn’t talk much to anyone. Although he wanted to become a successful actor like his father Dharmendra.

Because of this Dharmendra sent Sunny to England to study acting. He studied acting at the Old World Theater in Birmingham. After completing his studies, Dharmendra called Sunny and called him back. The reason was the film Betaab released in 1983. Sunny made her Bollywood debut with this film. Sunny’s acting in the film was highly appreciated. He was also nominated for Filmfare Best Actor for this film. But there is also a funny anecdote from the making of this film to its release.

Sunny had secretly married even before the release of the film

Dharmendra had seen Rajendra Kumar’s son Kumar Gaurav’s film Love Story. After seeing this film, he thought of making the film Betaab and he also wanted to make Sunny’s Bollywood debut from this film. This film was Javed Akhtar’s first film to be written independently as before that he used to write the story of films with Salim. It is worth noting that at the age of 14, Sunny got engaged to Pooja. When Pooja’s father came to know that Sunny was working in films, he felt that Sunny would leave his daughter Pooja.

After the engagement, Pooja lived with Sunny in Mumbai, but after hearing about the films, Pooja’s father called her back to England. At the same time, he kept pressurizing Dharmendra to marry Sunny with Pooja. Dharmendra kept telling them that they should stop till the release of Betaab, after that they would get both married. But Pooja’s father does not agree to this.

After this Dharmendra had to accept his words. However, Dharmendra’s father believed that this marriage should be done in secret or else it will have a bad effect on Sunny’s career. On the insistence of Pooja’s father and on the advice of Dharmendra’s father, Sunny-Pooja got married in a secret way in England. After the release of the film Betaab, both of them were also married again for the sake of close friends and family.

Sunny broke the relationship with Shahrukh because of the film Darr

After this, films like Sunny Deol’s Arjun, Chaalbaaz, Pap Ki Duniya and Ghayal were released. Sunny was cast in the role of Hero in the film Darr released in 1993 and Shahrukh Khan in the role of Villain. However, Shahrukh’s screen time was more than Sunny’s and despite playing the villain’s role, Shahrukh got more popularity than Sunny. Sunny was very upset with Shahrukh because of this. After the release of the film, Sunny gave an interview. In this interview, Sunny had said that actors should not dance in any marriage with money. Dancing in marriage is only for the people of Mujre. At the same time, actors should also take care of their dignity. People started linking this statement with Shahrukh because many actors including Shahrukh, Akshay Kumar used to dance with money in marriage and it is also believed that this trend was started by Shahrukh. For this reason, it was being said that he has tightened this taunt on Shahrukh.

Theaters opened from 6 o’clock for the film Gadar

Sunny Deol’s film Gadar was released in 2001 after giving many consecutive best films. This was Sunny’s best film. The craze of this film was such that theaters were opened from 6 o’clock at the behest of the audience. About 8 shows of the film ran in a day. Despite all this, about 5 thousand people lived outside the theatre. Alam was also that people used to come to watch the film by filling in trucks and many times people also created a ruckus when they did not get tickets.

Sunny Deol’s film Ghayal was released in 1996. There was a scene in the film in which Sunny, who was seen in the role of father, was telling Amrish Puri that he had cancer. As soon as the director said action at the time of the film shoot, Sunny was so engrossed in this character that in reality there is Kashi (Sunny’s character in the film). The scene of the film was shot but seeing Sunny’s strong acting, the eyes of everyone present on the set became moist.

Kamal Haasan was the first choice for Sunny’s film Ghatak

The anecdote is also that for this film, first Rajkumar Santoshi had cast Kamal Haasan. The script of the film was also written keeping him in mind. The reason for casting Kamal Haasan was also that since 1985, Kamal had appeared in any Bollywood film, so people in Bollywood were eagerly waiting for him. The director had also signed the film and at that time an ad was also run that Kamal Haasan Welcome Back to Hindi Screen. But the distributors of the film did not want this. He believed that only Sunny would fit in the role of Kashi in the film. Then they convinced Rajkumar to play Sunny by citing the film Ghayal.

In 1988, a Sunny Deol film Ram Avatar was released. He was seen with Anil Kapoor in this film. There was a scene in this film in which Sunny had to strangle Anil. In this scene too, Sunny was so inclined that he strangled Anil too loudly. After the shoot of this scene, Anil created a ruckus on the entire set and everyone started saying that Sunny had deliberately slit his throat very fast. Because of this, Anil was also very angry with Sunny.

Another film released in the same year, Intakam. Director Rajkumar Kohli wanted to cast Sunny and Anil Kapoor in the film. Although both did not want to work together after that accident, but after much persuasion, both agreed. In one scene of this film, both had to shout a lot at each other. Both of them came so close shouting that all Anil’s spit started coming on Sunny. Sunny many times explained to Anil that speak softly, speak slowly but Anil did not listen and went on spitting on him every time he spoke. Because of this, Sunny got very angry with Anil and the crew members had to come between the two of them. After this accident, the two did not do any films together.

Sunny Deol, who is seen as an action hero in films, is a very settled and heartfelt person in real life. It is also an anecdote from Sunny’s heart that when Salman’s career was full of ups and downs, it was Sunny who helped him. Salman had told in an interview that he was struggling in the 90s and Sunny was one of the successful actors at that time. For this reason, whenever Salman needed any career advice, he used to take it from Sunny. It was Sunny’s advice that helped Salman a lot in grooming his career.

There is also an anecdote of Sunny’s Dildari that Sunny has worked with Sridevi in ​​many films. Sridevi had a habit that she used to come late on the film sets. Sunny used to get very upset with this habit of his but never used to complain to him and also used to make him wait on the set.

Sunny and her fans crazy

Because of Sunny, the boy became an IPS officer

Manoj Rawat…He is a big fan of Sunny Deol. Manoj started his career with the rank of constable and went till IPS. But the reason behind this was Sunny’s film Indian. Actually, Manoj was very big of Sunny Deol since childhood and when he saw his film Indian, he was determined that he would become an IPS officer. After getting the constable’s servant, Manoj prepared for the civil exam. After clearing this exam, he got selected in IRS but even after this Manoj continued his preparation because Manoj’s dream was only to become IPS. Then after a long wait and hard work, this dream of Manoj was fulfilled in 2019 and he was selected for the IPS rank.

Dacoit turns out to be Sunny’s fan, reaches jail by posting video

This is the story of dacoit Kalha. For a long time, the police was looking for Kalha, but even after a lot of searching, he could not be found by the police. Kalha was a big fan of Sunny Deol and his passion for Sunny overshadowed him. Actually, one day Kalha made a lip-sync video of a dialogue of Sunny’s film Jeet and posted it on his Facebook account. When this video was caught by the police, they traced the location with the help of this video and caught Kalha.

Previous Nothing Ear 1 Price Hiked Ahead of Diwali Check New Price ttec
Next Wherever you go, you will know; This is how the location of every moment of the flight is found. Bernard Arnault Private Jet Live Track Location; What Is ADS-B Technology