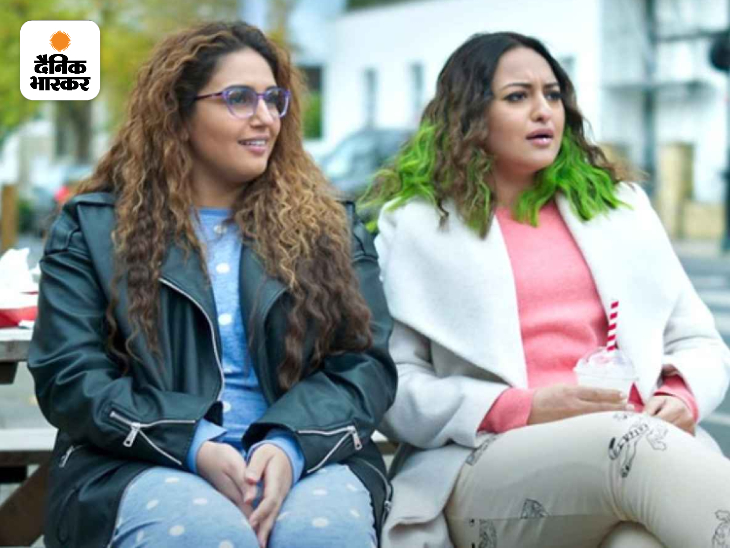 Actress Huma Qureshi and Sonakshi Sinha’s first issue comedy film Double XL, who have completed 10 years in the industry, is going to be released soon. It is directed by ‘Helmet’ fame Satram Ramani. There he had woven the story around the issue of condoms.

Now through this film, he has taken a realistic take on the issue of body shaming of overweight women. During a conversation with Dainik Bhaskar, Huma and Sonakshi told that the idea of ​​this film came to the director because of their weight. She admitted that she had faced body shaming in real life. At the same time, he also told that at one point his confidence was shaken because of this.

Sometime back Sonakshi was asked by a heavy producer to lose weight, while talking about this, she says, ‘I had signed that film. Just ten days before the film went on floors, that producer told me that if you don’t lose weight, we will replace you.

That too when those producers were my old acquaintances. Along with this, he himself was very overweight. I was surprised to see his attitude and guts as to how he said this. After all this, I did that film. But I definitely told him that you got this unethical.

Huma also described this attitude of the producer as the bitter reality of the industry and said, ‘Often on every film, actresses are asked to become a little thinner. ‘Double XL’ is the first film of my career in which the director said get a little fatter.

Sonakshi says, ‘I had gained about 15 to 17 kilos.’ Huma said on him, ‘I gained 5 kg more weight than Sonakshi did. It is strange that the measure of beauty becomes the weight of women. In the review of my second film, someone had written this line that Huma Qureshi is cute in the character, but she is five kilos fat to become a mainstream heroine. That line struck me a lot. I was new then, but if weight was the only measure, then I or Sonakshi would not have been able to travel ten years in the industry.

In this film the director didn’t tell me that I want a six pack.

Although there is a lot of acceptance in Bollywood about heavy actresses or actors without six pack abs, the film’s hero Zaheer Iqbal responds by saying, ‘It is a good thing not that in the South, the hero with heavy weight is accepted. At the same time, there are many people in Bollywood who do not have six packs. That era is over now. If there are no action genre films, it is hardly said that a six pack is needed. For this film, the director did not say that I need a six pack.

People want to see the actor in a different way in every film.

Saqib Saleem, who accompanied Huma on the trailer of ‘Double Excel’, also supported Zaheer’s argument, saying, ‘Now such films or web series are not made where you look the same. In some you are fat and in some you are thin.

Huma says, ‘If the character is that of an athlete, then the body has to be kept like that. Ardwise, if someone is a housewife, then his physique will be different. Otherwise he will not look like that character.