ICC T20 World Cup 2022 is starting from today (16 October). A total of 16 teams are going to participate in this World Cup going to be held on Australian soil. Out of these 16 teams, 8 have directly qualified for the Group-12 stage, while the remaining 4 teams will secure their place by winning the qualification round. This mega tournament is being played in a total of three stages, which include Round 1, Super-12 and Playoff matches.

Eight out of the 16 teams have directly qualified for the Super 12 stage, while the remaining 4 teams will win the qualification round to confirm their place. In the qualification round, two groups of 4-4 teams have been formed. In this, the top-2 team in their respective group will reach the Super 12 stage. Then in the Super-12 stage, there will be two groups of 6-6 teams, in which the top-2 teams in their group will make it to the semi-finals.

What will be the point table system?

The ICC has released the point table system for this T20 World Cup. Each team will get two points for winning, and zero points for losing. If the match is tied or canceled, then one point will be divided among the teams. If the points of two teams in the group are equal, then it will be decided on the basis of how many matches they won in the tournament, what was their net-run-rate and what is their face-to-face record.

Matches will be held on a total of seven grounds

A total of 45 matches are to be organized in the T20 World Cup 2022. Where all the 12 matches of the qualifying round will be played in Hobart and Geelong. While Sydney, Melbourne, Perth, Adelaide and Brisbane will host the Super 12 stage matches. The semi-final matches are to be played at the Adelaide Oval and Sydney Cricket Ground. At the same time, the final match is to be held on 13 November 2022 at the historic Melbourne Cricket Ground. 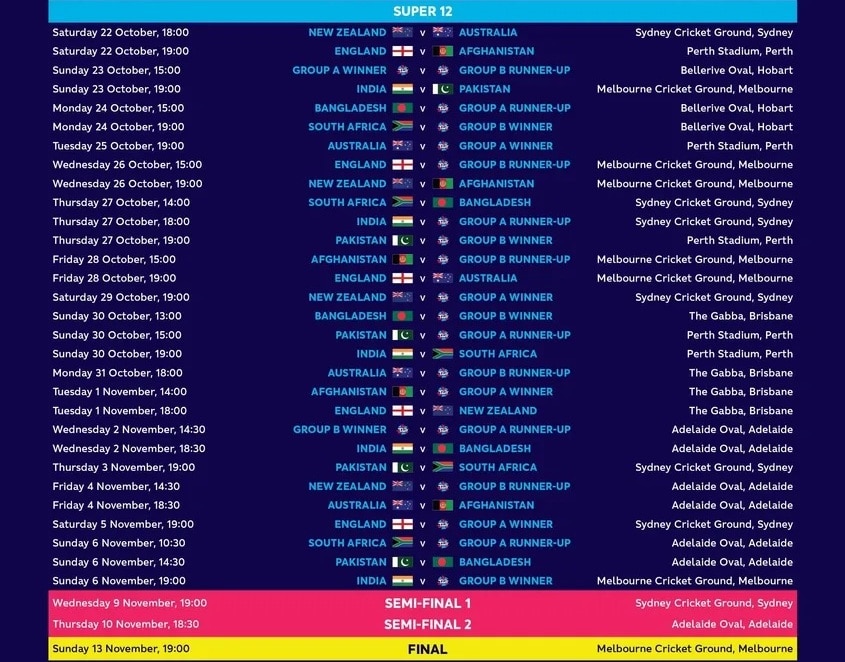 The Indian team will go into this World Cup with the intention of ending the title drought. His first match is against Pakistan in Melbourne on 23 October. After this, on October 27, he will have a match with the runner-up team of Group-A. Then Rohit Brigade will take on South Africa on 30 October and Bangladesh on 2 November. Then the last match of Team India Super-12 stage will face the winner team of Group-B on November 6.

How much amount will the winning team get?

According to the ICC, the team winning the T20 World Cup will get $ 1.6 million, the runner-up team will get $ 8 lakh million. While the remaining two teams reaching the semi-finals will be given $ 4-4 lakh. A total prize money of $ 5.6 million has been fixed for the T20 World Cup, which will be distributed differently among all 16 teams. A total of 12 teams will play in the Super-12 stage, out of which 4 teams will go to the semi-final stage.

Where can the World Cup matches be watched?

The matches of the T20 World Cup in India will be broadcast on different channels of Star Sports. At the same time, there is going to be live streaming of these matches on Hotstar and website. Apart from this, Doordarshan will also broadcast all the matches, semi-finals, final matches of India. Also on aajtak.in you will be able to read all the news, interesting statistics related to T20 World Cup. Let’s also take a look at the squads of the teams.

These four teams are strong contenders for victory

This is the 8th season of the T20 World Cup. The Indian team won the title of the first season in 2007. Till now, West Indies is the only team to have won the title twice (2012, 2016). Apart from this, Pakistan, England, Sri Lanka and Australia have won the title 1-1 times. If we talk about this time, apart from the current champion Australia, India, England and Pakistan are seen as strong contenders. At the same time, it would be a huge mistake to underestimate New Zealand, Sri Lanka and South Africa too.

Know the squads of all 16 teams

First Round Group-A (Qualifying Round)

First Round Group-B (Qualifying Round)