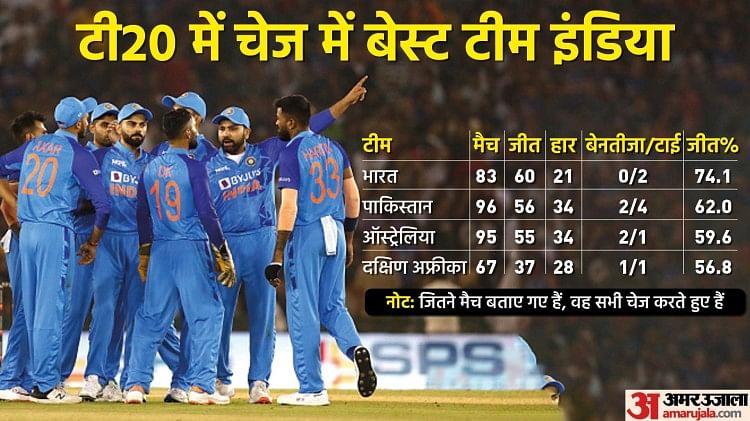 The Indian team has played a total of 32 T20s this year. Out of this, 23 have won. Earlier in the history of T20 International cricket, no team has played so many matches in a calendar year. India overtook Pakistan in this matter, which played 29 matches in 2021. Along with this, winning 24 T20 matches is also the most in a calendar year. Earlier, Pakistan had won 20 matches in 2021. In such a situation, the Indian team can firmly present its claim for the T20 World Cup this year.

Out of the 32 T20s that the Indian team has played this year, 23 have won and the team has lost eight. One match was inconclusive. Team India has chased the target in 11 out of 32 matches this year and won nine. Only against South Africa on October 4 at Indore and against England on July 10 at Nottingham, India had to face defeat in the chase. Apart from this, Team India has won all the matches while chasing this year.

India has so far played 185 matches in T20 history and chased down the target in 83 matches. The team has won 60 matches. At the same time, India had to face defeat in 21 matches, while two matches were tied. India’s win percentage is 74.1. At the same time, Pakistan is at number two. Pakistan has played a total of 203 T20 matches and chased the target in 96 matches. Out of this, the team has won 56 matches, while Pakistan had to face defeat in 34. Two matches were inconclusive and four matches were tied.