T20 World Cup: India and Pakistan have played six matches in T20 World Cup, know the thrill of all matches

The rivalry between India and Pakistan on the cricket field is not hidden from anyone. Once again both the neighbors are going to face each other in the T20 World Cup 2022. All eyes are on this great match to be held in Melbourne on 23 October. In this blockbuster match, the command of India will be in the hands of Rohit Sharma. At the same time, Babar Azam will be seen captaining the Pakistan team.

If seen, till now a total of six matches have been played between India and Pakistan in the history of T20 World Cup. In five out of these six matches, the Indian team has had the upper hand, while the Pakistan team was dominating in one. Let us know in detail about all these six matches-

1. 2007 World Cup Group Matches: India and Pakistan first met in the T20 World Cup in 2007. Batting first, in this match played in Durban, India scored 141 runs for the loss of nine wickets. In reply, Pakistan also scored the same score for the loss of seven wickets. After this the match was decided in the ball out where India won 3-0. Harbhajan Singh, Virender Sehwag and Robin Uthappa hit the ball on the stumps for India. While Shahid Afridi, Umar Gul and Yasir Arafat bowled for Pakistan but none of the balls hit the stumps.

2. 2007 World Cup Final: This is said to be the biggest match in the history of T20 World Cup. Batting first after winning the toss in the final match, India scored 157/5 in the allotted 20 overs. Gautam Gambhir played a brilliant innings of 75 runs in 54 balls for India. Apart from Gambhir, Rohit Sharma played an important innings of 30 not out in the last over. In reply, the Pakistani team lost their six wickets for 77 runs. But once again Misbah-ul-Haq (43 runs) became a problem for the Indian bowlers. Misbah made useful partnerships with Yasir Arafat (15) and Sohail Tanveer (12) to put Pakistan in a winning position. Pakistan had to score six runs in the last four balls, but Joginder Sharma got Misbah caught by Sreesanth to give India a memorable victory.

3. 2012 World Cup: After five years, India-Pakistan were again face-to-face in the T20 World Cup. Batting first in the match played in Colombo, Sri Lanka, the Pakistani team was bundled out for 128 runs. Shoaib Malik (28) scored the most runs for Pakistan. While Umar Akmal contributed 21 runs. Lakshmipathy Balaji took three wickets for Team India. At the same time, Ravichandran Ashwin, Yuvraj Singh had dismissed two players each. In reply, India achieved this target on the basis of Virat Kohli’s unbeaten 78, losing two wickets in 17 overs. 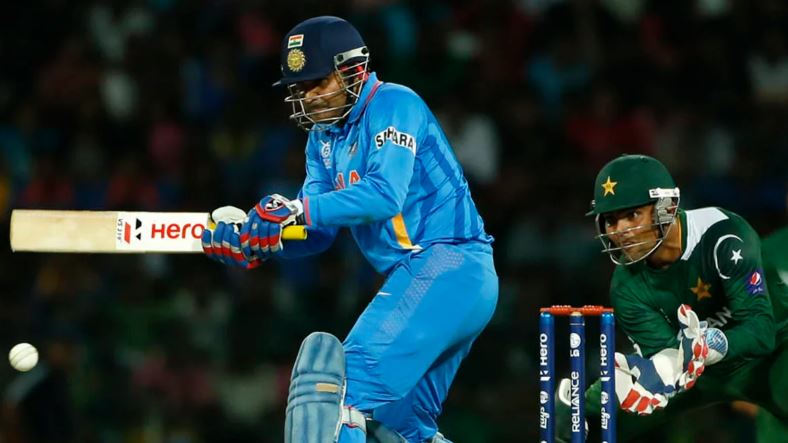 4. 2014 World Cup: Two years later, once in 2014, both the countries faced each other in the T20 World Cup. Batting first, Pakistan scored 130 runs for the loss of seven wickets in the match held in Dhaka. Umar Akmal top scored with 33 and Ahmed Shehzad scored 22 runs. Amit Mishra had dismissed two players for the Indian team. In reply, India achieved this target in 18.3 overs for the loss of three wickets. Virat Kohli scored 36 and Suresh Raina scored 35 not out. 5. 2016 World Cup: The 2016 T20 World Cup was played in India. In this episode, the Super-10 match was held between India and Pakistan at the Eden Gardens. Batting first in the rain-affected match, Pakistan had scored 118 runs in 18 overs for the loss of five wickets. Shoaib Malik scored 26 and Ahmed Shahzad scored 25 runs. In reply, India achieved the target in 15.5 overs for the loss of four wickets. Virat Kohli scored an unbeaten 55 runs and was adjudged the player of the match.

4. 2021 World Cup: The last time India and Pakistan competed in the T20 World Cup was last year. Batting first in the match held in Dubai, India had scored 151 runs for seven wickets. Virat Kohli contributed 57 runs in 49 balls and Rishabh Pant contributed 39 runs. Shaheen Afridi took three wickets for Pakistan. In reply, Pakistan won the match by scoring 152 runs in 17.5 overs without loss. Wicketkeeper Mohammad Rizwan made 79 and captain Babar Azam played unbeaten innings of 68 runs. This was the first victory of Pakistan team against India in the history of World Cup.

Previous Google introduced Android 13 (Go Edition) for cheap phones, know what’s special
Next From today, only those who keep money in Savings Account will get more interest than FD of many banks including SBI.