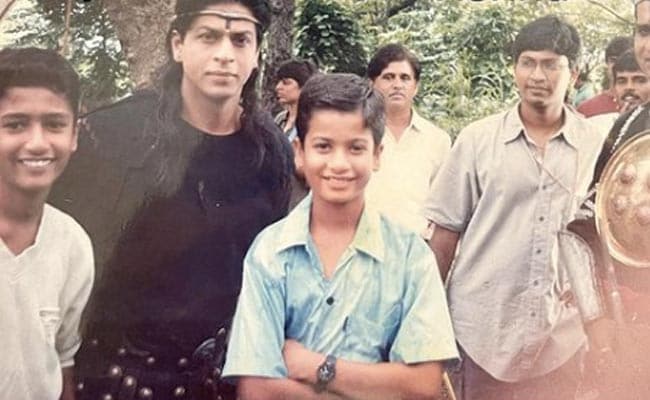 Celeb Childhood Photo: Two children are seen with Shahrukh Khan in the photo. One is wearing a white T-shirt while the other boy is wearing a sky blue shirt. Both these children have grown up now and are great actors. The child standing in a white T-shirt is the husband of the superstar. His wife has been Shahrukh’s heroine and has given many hit romantic films with Shahrukh. Shahrukh’s pairing with this kid’s wife is very much liked on the screen.

Perhaps you have recognized this child and those who have not been able to tell, tell them that this photo is of actor Vicky Kaushal. In this photo, Vicky’s brother Sunny is also standing with him. Sunny is wearing a sky blue shirt, while Vicky is seen in a white T-shirt. This photo has been shared by Vicky Kaushal’s father Sham Kaushal on his Insta account. This photo is from the set of Shahrukh’s 2001 film Ashoka. The younger Vicky and Sunny are happily posing for the camera with Shah Rukh. At the same time, Sham Kaushal and Sher Shah’s director Vishnu Vardhan are seen in the background.

He has written a long note with the photo, no one had imagined that Vicky would one day work in the film industry. Vicky has also received the Best Actor and Best Director awards in 2022 for the best work.
“By the grace of God, this picture was taken during the shooting of Ashoka in Film City in 2001. Vishnu Vardhan was an assistant director and Vicky was in 8th standard then. Fans made a lot of comments on this photo after sharing the post. One Fan wrote, “Amazing…my favorite actor..Rab Rakha…..blessed…

Let us tell you that Vicky Kaushal made his assistant director debut in Anurag Kashyap’s 2012 film Gangs of Wasseypur. She made her acting debut in 2015 with Shweta Tripathi, Richa Chadha and Pankaj Tripathi starrer film Masaan.
On the work front, Vicky Kaushal has many films in his hand, some of them are Govinda Naam Mera, Untitled with Sara Ali Khan and Sam Bahadur.