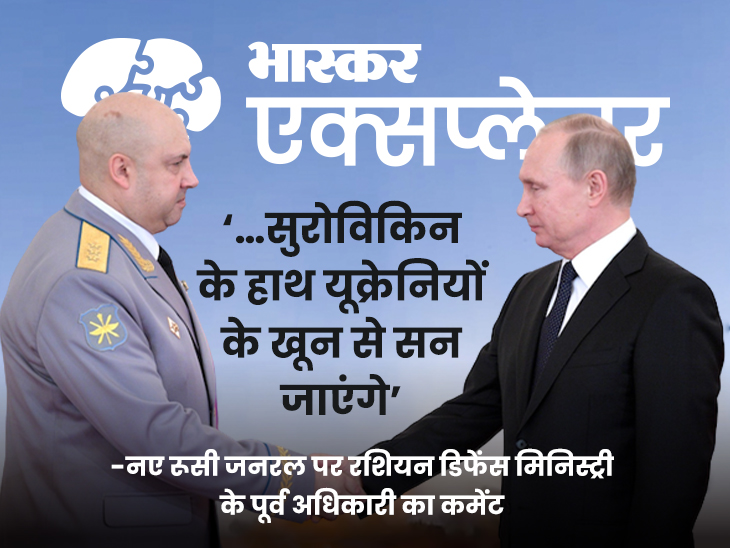 ‘I am not surprised to see what happened in Kyiv this morning. Surovikin is ruthless, he has very little respect for human life.’

“Russian forces led by him have targeted places where people live, work and study, including homes, schools, hospitals, and markets in Syria.”

‘While working on a combat mission in Syria, for a minute we did not forget that we are defending Russia.’

The first two statements above are about Sergei Surovikin, the new Russian general appointed to command the Russian army in the Ukraine war. The third statement is from Surovikin himself, which shows the extent to which he is obsessed with the cause of Russia.

Just hours after Sergei Surovikin took over, Russian forces launched a flurry of missiles on Ukraine in its biggest attack in months.

Know who is Russia’s new General Sergei Surovikin in Bhaskar Explaner? Why are they called merciless?

On September 8, the Russian Defense Ministry announced the appointment of 55-year-old General Sergei Surovikin as the overall commander of the Russian military in Ukraine. However, it was not said who Surovikin had replaced. For the first time in the Ukraine war that began on 24 February, a single commander has been officially appointed for the entire Russian army. Surovikin was earlier commanding the Russian Air Force.

In April, nearly two months after the start of the Ukraine war, a British Military Intelligence report claimed that the command of the military operation against Ukraine had been handed over to Russian General Alexander Dvornik. Dvornico is best known for his brutal operation in Syria in 2015. However, Russia never clarified who was in command of its campaign in Ukraine.

Putin’s appointment of the new general comes at a time when Ukrainian forces have retaliated strongly in the past few days. Ukraine has liberated more than 6 thousand kilometers from Russian occupation, especially in the Kharkiv province in the northeast. At the same time, Ukraine has also recaptured some areas of Kherson province in the south and the Lyman transport hub in eastern Ukraine.

Putin has appointed one of Russia’s most talked-about generals, Sergei Surovikin, to revive the Russian military’s campaign in the war against Ukraine.

Who is Sergei Surovikin, one of the most talked about generals of Russia

Surovikin is one of Russia’s most talked-about generals and has been recognized in Russia as a general who left a mark in many of the country’s major military operations.

The first anecdote related to the ruthlessness of Surovikin dates back to 1991. At that time there was an unsuccessful attempt to revolt in the Soviet Union. Surovikan, then the commander of the Rifle Division, ordered the army to open fire on pro-democracy supporters, in which three people were killed and several people were crushed.

Another anecdote related to Surovikin’s brutality came to light in 2004 when the news of the suicide of a colonel working under him appeared in the Russian media. The colonel was so badly reprimanded by Surovikin that he committed suicide.

After this incident, Surovikin’s co-workers gave him the nickname ‘General Armageddon’. Armageddon means the last or utterly devastating battle. That is, the Great War or the World War.

Surovikin’s most brutal face was seen in 2017 during a Russian military operation in Syria. Putin sent Russian forces to aid Syrian President Bashar al-Assad against his rebel groups.

As head of the Russian Air Force, Surovokin not only targeted rebel positions in Syria, but also did not spare civilians. They bombarded the Syrian city of Aleppo so heavily that almost the entire city was reduced to ruins. In 2019, on the orders of Surovikin, the Idlib province of Syria was also heavily bombed by the Russian Air Force. Hundreds of ordinary Syrians were killed in this bombing.

Surovikin is accused of using chemical weapons against rebel groups in Syria. After Surovikin’s infamous actions, Human Rights Watch said in an October 2020 report that Surovikin could be primarily held responsible for human rights violations in Syria.

A former Russian Defense Ministry official who worked with Surovikin said he was not at all surprised by the October 10 missile strike in the Ukrainian capital, Kyiv, as Surovikin was inside “for human lives,” The Guardian reported. Very little respect. This officer says, ‘They fear that Surovikin’s hands will be completely stained with the blood of the Ukrainian people.’

Surovikin has been arrested twice for selling illegal weapons

After the rebellion was suppressed, Surovikin was arrested and imprisoned. After 7 months of investigation, he was promoted to Major, acquitted of the charges with the support of Boris Yetlisyn.

In 1995, Surovikin was sentenced to one year in prison by a Moscow military court on charges of illegally selling arms. However, after investigation, he was acquitted of the charges and released.

Two days after Surovikin became Russia’s new chief of war, Russian forces launched the biggest attack in months, firing more than 80 missiles at 10 cities in Ukraine. This action of Russia is believed to be a response to the attack on the Kerch Bridge connecting Russia with Crimea on Saturday.

It is not yet clear who ordered these missile strikes on Ukraine. Surovikin is believed to be the brain behind the missile attack on Ukraine, because Surovikin has carried out similar horrific bombings on civilian targets in the past.

In this missile strike of Russia, civilian targets of Ukraine were also targeted. Sites targeted by Russian forces included an important road junction next to a university and a children’s playground.

Russian General Sergei Surovikin has been infamous for this style of attack. They can go to any extent to fulfill their mission and they do not care about human lives at all.

According to the American defense policy think tank Jamestown Foundation, Surovikin is recognized in the Russian military as a very cruel and merciless man.

Why Putin chose ‘merciless’ General Surovikin for the Ukraine war

According to experts, there are many reasons for this, take a look at 5 main reasons…

1. Trying to get the Russian operation back on track

Putin has brought in Surovikin at a time when Russia is facing the strongest resistance from Ukraine. Ukraine has liberated more than 6 thousand kilometers of territory from Russia last month. With the appointment of a powerful general in Surovikin, Putin is trying to revive Russia’s derailed military campaign. This will also be the biggest challenge before Survokin.

2. General who will go to any extent to win the war

Surovikin is notorious as a general who can do anything to win a war. Putin has threatened Ukraine and Western countries with nuclear weapons in recent days. They needed a general who could carry out their dangerous plans. The perfect choice is Surovikin, who has been notorious for everything from the horrific bombings of Syrian cities to the use of chemical weapons.

3. Trying to deal with the protests in Russia

Surovikin’s appointment is seen as a response to Putin’s criticism at home over Ukraine’s counterattack and not winning the war seven months later. Putin has brought in a general who speaks offensive language like staunch Russian nationalists. Russian nationalists have been calling on Putin to target civilian targets in Kyiv and Ukraine. Surovikin can fulfill all these wishes of the nationalists.

4. If Russia does not win, it will be easy for Putin to get out

5. Reply to Ukraine, America and the West

By bringing in a strong general, Putin has sent a strong and clear message to all Western countries, including Ukraine and the US, that Russia is not going to give up. Ukraine may be giving competition to Russia on the basis of American weapons, but they have such a general who can defeat Ukraine’s intentions. Surovikin has also signaled his intentions by raining missiles across Ukraine just hours after his appointment.

After reading the news you can take part in a poll…

1. India’s strength in wrestling, it is out of the Commonwealth: how Australia did the game after all

3, Avalanche i.e. 1 billion kg of snow: 41 people of Uttarakhand buried in it; what happens