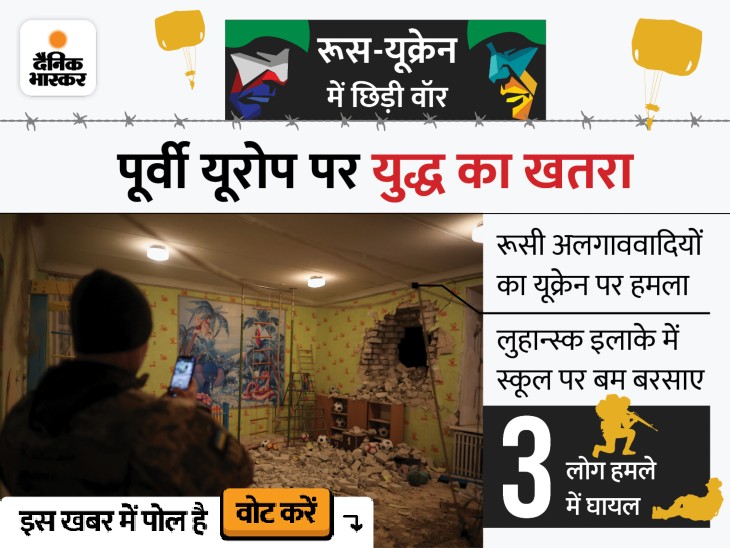 The tension between Russia and Ukraine in Eastern Europe has now reached its peak. Both countries have accused each other of the attack. Ukraine says Russian-backed separatists on Thursday opened fire on a school in a village in its Donbass region. Three people are reported to have been injured in this attack. At the same time, Russian media quoted separatist leader Leonid Pasechnik as accusing the Ukrainian Armed Forces of attacking civilians in the Luhansk region.

Russia may create false excuse for attack
US officials have already expressed fears that Russia may attack Ukraine on the pretext of a false flag operation. US President Joe Biden has also expressed the possibility of war between the two countries. Russia has talked about the withdrawal of its troops from the Ukraine border, but America still does not trust it. In a White House address on Wednesday, Biden said – We cannot rely on Russia’s promises and claims for the time being.

Ukraine has accused Russia of firing in its territory. According to Ukraine, the Russian army opened fire on a kindergarten in its controlled Donbass.

Antony Blinken lashed out at Russia at UNSC
The United Nations Security Council also met yesterday regarding Ukraine tensions. In this meeting, US Secretary of State Antony Blinken accused Russia of continuing aggressive activities. Blinken said – US intelligence has strong information that Russia will attack Ukraine. If it is not, then Moscow should announce it.

US Secretary of State Antony Blinken has called Russia a threat to world peace. Blinken said – If Russia does not agree, then very strict steps will be taken against it.

Russia has expelled American diplomat Bart Gorman from the Moscow embassy. Calling it a provocative move, a US official made it clear that the US is not going to back down in any case. He said- This is clearly a step to increase the tension. Diplomatic solutions cannot be found using these methods.

Lloyd Austin and Jens Stoltenberg meeting
US Defense Secretary Lloyd Austin met with NATO head Jens Stoltenberg in Brussels in the wake of Ukraine tensions. Lloyd Austin said – Russia is still increasing the deployment of its troops near the Ukraine border. War planes are also being added to Russian military preparations and blood is being stocked for soldiers wounded during the war.

US Defense Secretary Lloyd Austin met with the NATO head in Brussels amid growing threats from Russia and Ukraine.

Kremlin spokesman Dmitry Peskov has dismissed all these fears of America. Peskov says that the troops are continuing to withdraw, such works take time. Soldiers cannot fly in the air. At the same time, Ukrainian President Volodymyr Zelensky once again clarified that NATO membership is necessary for the long-term security of his country.