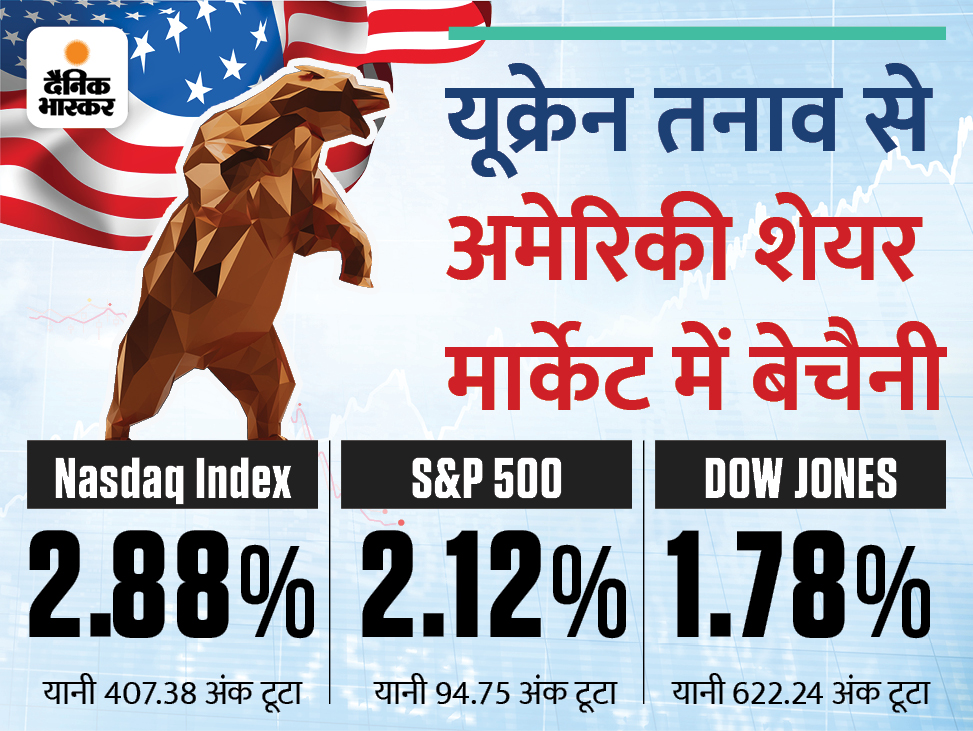 Ukraine tensions have caused great turmoil in the US stock market Wall Street. The Nasdaq Composite Index, the S&P 500 and the Dow Jones (all three are US stock market indexes) recorded major declines. The crypto market has also been shaken by the sound of war. Bitcoin, the most popular cryptocurrency, lost 7.79% in value.

The growth-oriented technology and communication services sectors were hit hard on Wall Street. Due to the potential threat of war, investors are focusing on investments in the defense sector, bonds and gold. Apart from this, the decrease in US Treasury production has also affected the market.

The US stock market is uneasy due to tensions in Eastern Europe, Russia and Ukraine.

Due to the potential threat of war, investors are focusing on the defense sector rather than the growth oriented sector.

Europe is dependent on Russia in many respects, if there was a war, the European economy would be shaken. As a result of this, inflation in America can increase. In the coming times, the US Federal Reserve may take tough decisions to keep inflation under control. Because of this, investors are looking to avoid any major risk.

A few weeks ago, Federal Reserve Chairman Jerome Powell called rising inflation a serious threat to the country’s economic recovery. Since then, investors have been feeling that the Federal Reserve will raise interest rates several times this year to deal with inflation. Due to this, high valuations of companies and rising interest rates are expected to cause huge losses.

US President Joe Biden said on Thursday that there are many indications that Russia may attack Ukraine in the next few days.

US President Joe Biden has also expressed fears of war between Russia and Ukraine. Russia has talked about the withdrawal of its troops from the Ukraine border, but America still does not trust it. In a White House address on Wednesday, Biden said – We cannot rely on Russia’s promises and claims for the time being.