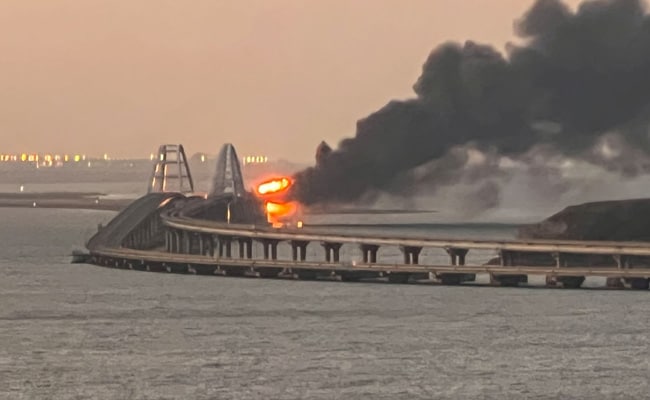 VIDEO: Massive Explosion On The Bridge Connecting Crimea With Russia, Part Of The Bridge Broken

There was a huge explosion on the Crimean Bridge (Crimean Bridge Collapsed) connecting Russia and Crimea, due to which a fire broke out on the bridge and a part of the bridge was partially broken. In a video viral on social media, the bridge of the Strait of Kerch is shown burning. In this case, Russia has started a criminal investigation into the blast on Saturday. Russia’s investigative agency said it had “registered a criminal case in connection with the incident on the Crimea Bridge.

In a video viral on social media, the huge bridge is shown burning and falling. Russia has called it a criminal conspiracy. The Russian investigative agency said it had sent spies to the scene. “Russian investigative agencies are investigating individuals involved in the crime at the scene. The bridge cost billions and was seen as a major source of Russian ‘glory’ in the area. Being important, it was a major target for Ukraine.

Russia occupied Crimea
On 27 February 2014, Russian forces occupied Crimea. The city, with a majority of Russian people, was handed over by Russia to Ukraine after the dissolution of the Soviet Union. After the occupation, a referendum was held in Crimea on 16 March 2014 and on 21 March 2014 Russia formally annexed Crimea.

Previous Who is Arun Bali Biography Profile family to Filmography and TV shows goodbye on his last film release
Next These are the 5 reasons for the Smartphone being blasted, you must also know…